Angara: The national budget must be able to keep pace with COVID-19

Senator Sonny Angara sees the need for more flexibility in the processes involved in the annual submission of the national budget to keep up with the constantly changing demands and situation on the ground during the pandemic.

As the chairman of the Committee on Finance, Angara noted that many of the requirements of the various government agencies and offices are not contained in the copy of the national budget submitted to Congress, particularly those related to the response to the COVID-19 pandemic.

Senator Sonny Angara is optimistic the Magna Carta of Filipino Seafarers will finally become a law after over a decade of languishing in the legislative mill.

As the author of Senate Bill 135, which along with other similar measures has been consolidated into Senate Bill 2369, Angara said that this will ensure the rights of Filipino seafarers will be upheld and that they will be given protection under existing laws.

Angara: Move towards digital payments welcome to all sectors

Both the government and the private sector welcome the promotion of digital payments as the way forward in providing Filipinos with a fast, safe and efficient way of making transactions in the country.

As the author of Senate Bill 1764 or the Use of Digital Payments Act, Senator Sonny Angara said there was widespread support for the adoption of digital payments for government and private transactions, “for as long as there are adequate safeguards in place to protect our people.”

Senator Sonny Angara prodded the Department of Health (DOH) to address the issue of contractualization within its ranks and hasten the regularization of the doctors and nurses working in its hospitals and other facilities.

As chairman of the Committee on Finance, Angara confronted the DOH about underspending in the amount of P24 billion, a portion of which pertains to funding under the now expired Bayanihan 1 and 2 laws.

Angara to DOH: Provide health workers with hazard allowance as mandated by law

Senator Sonny Angara reminded the Department of Health (DOH) today that apart from the special risk allowance (SRA) to health workers, they are also entitled to hazard allowance as the frontliners in the country’s battle against COVID-19.

As the sponsor and author of Republic Act 10801 or the Overseas Workers Welfare Administration (OWWA) Act of 2016, Angara said the repatriated Filipinos from the conflict-ridden Afghanistan will have something to fall back on while waiting for their next deployment or if they decide to stay in the country.

Angara: Ramp up biosurveillance and genome sequencing to control the spread of new COVID-19 variants

With more cases of the Delta variant of COVID-19 being recorded in the country, Senator Sonny Angara today called on the authorities to be more proactive in its efforts to prevent the spread of the deadly virus.

Angara aired his concern over the data showing how the Delta variant is highly contagious and could lead to outbreaks if not identified and controlled immediately.

Angara to PhilHealth: Expedite the settlement of hospital claims

Most of the country’s hospitals have been facing extreme pressures due to the COVID-19 pandemic so whatever the government owes them for their services should be settled swiftly, Senator Sonny Angara said today.

“There is growing concern over a possible surge of new cases of COVID-19 now that the deadly Delta variant of the virus is already in the country so our hospitals should be prepared to deal with this scenario,” Angara said.

Angara: 2022 budget should map out the road to recovery from the COVID-19 pandemic

President Duterte’s last budget request should “capture the urgency and the dimensions” of the national recovery from the pandemic that he laid out during his final State of the Nation Address Monday, Sen. Sonny Angara said today.

“The budget puts the money where the rhetoric is,” Angara said.

He said the plans Duterte spelled out during his speech should end up in the proposed 2022 national budget, which Malacañang will be sending to Congress soon. 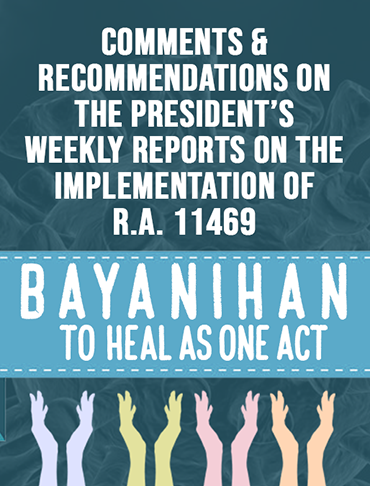