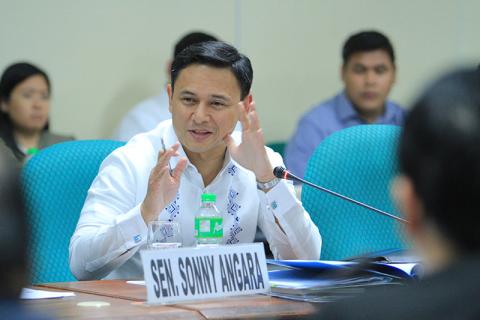 Reelectionist Senator Sonny Angara said the construction of the country’s first subway line and other key mass transit projects under the government’s centerpiece program “Build, Build, Build” should help restore public confidence in the local rail transit system, which has been under fire due to its poor and unreliable service.

“The Metro Manila Subway, along with the MRT-7, offers hope to railway commuters who have been putting up with long lines, passenger congestion, defective coaches and generally poor maintenance in existing railway lines, particularly the MRT-3,” Angara said.

The Department of Transportation held the groundbreaking for the P350-billion underground railway system project on February 27 in Valenzuela as part of the solution to solve the perennial traffic problem in Metro Manila. The 36-kilometer subway line, which is expected to be completed in 2025, is envisioned to serve 370,000 passengers per day and connect Mindanao Avenue in Quezon City and Ninoy Aquino International Airport in Pasay City within 30 minutes.

Angara said that a reliable and efficient railway system was vital to the nation’s economic progress, as he noted a study by the Japan International Cooperation Agency showing that Mega Manila’s traffic jam was costing the economy a staggering P5.4 billion in lost opportunities a day.

“A well-functioning transport system helps grease the wheels of the economy and improve the lives of millions of people who rely on trains to get to work,” he said. Besides, he added, an efficient and reliable mass transport system, like commuter rails, offers a good alternative to private vehicles.

To help ease the worsening traffic congestion in Metro Manila and other urban centers in the country, Angara said the government must encourage people to take mass transit rather than use their own cars.

However, the senator said the MRT-3, which traverses the traffic-infested EDSA, was not a good alternative mode of transportation because of all the problems confronting the 19-year-old rail line.

“We cannot expect everyone to rely on our existing rail transport system given the technical glitches, long lines and other problems hounding the MRT-3,” Angara said.

The solution, he added, is for the government to improve the public transport system to make it a viable option.

The subway will be connected to the LRT 1 and MRT 3 and 7 via a common station along EDSA.

The ongoing MRT-7 project, which would connect North Avenue in Quezon City to San Jose del Monte City in Bulacan province, is also part of the “Build, Build, Build” program. The project is scheduled for completion by 2020.

ANGARA: PGH AND EAST AVENUE MEDICAL CENTER RECEIVE ADDITIONAL FUNDING UNDER THE 2021 GAA TO SERVE MORE FILIPINOS IN NEED OF MEDICAL ATTENTION
PCMC receives additional support under the 2021 GAA to provide even better services for children in need of medical attention-- Angara
Statement of Sen. Sonny Angara on the signing of the 2021 GAA
Christmas message of Sen. Sonny Angara
Angara: Displaced workers will continue to receive assistance under the 2021 budget
Improved internet services even in far flung areas expected with the increase in the budget for the National Broadband Program-- Angara
Angara-- New and unfunded laws will receive funding under the 2021 GAA
Improved health responses needed to boost consumer confidence and spur economic growth -- Angara
Angara wants more public hospitals and medical professionals to ensure all Filipinos are provided with quality health care
Angara wants public libraries to provide essential services to learners under the new normal
Statement of Sen. Sonny Angara on the transmittal of the 2021 GAB by the House of Representatives
Angara bats for the naturalization of Angelo Kouame
Angara pushes for survivorship benefits for members of the National Prosecution Service
The President's report on the implementation of the Bayanihan 2
Angara calls for extension of waiver on fees for digital transactions of banks and mobile payment services
Angara to Comelec: Work on making it easier for seniors and PWDs to vote during elections
Angara: There should be no delays in the implementation of Bayanihan 2
Angara says 2022 deadline for registration of 90 million Filipinos to PhilSys ID should be achieved without delay
Angara to CHEd and SUCs: Let’s work together in keeping Filipino graduates in the Philippines
Statement of Sen. Sonny Angara  (law sponsor) on the enactment of Bayanihan 2
END_OF_DOCUMENT_TOKEN_TO_BE_REPLACED