ANGARA: ‘MADE IN THE PHILIPPINES’ NEEDS INNOVATION TO ATTRACT GLOBAL MARKET 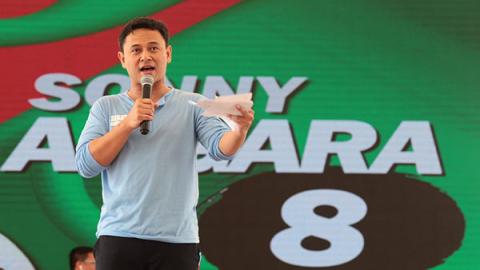 Reelectionist Senator Sonny Angara said the manufacturing industry needs a serious makeover if the country wants to recreate “Made in the Philippines” and attract global attention for fresh investments and market.

Angara, who has been pushing for a new “Made in the Philippines” campaign, said that while the country enjoys a unique competitive advantage and highly-skilled manpower, it needs to level up the standards, innovate and infuse global knowledge into the local industries.

“Not many around the world know—and neither do our people—that we are in fact manufacturing world-class products here in the country or are already taking part in global value chains,” said the senator who is running under the platform “Alagang Angara.”

Angara said this is already taking place in Batangas, where Boeing, the world’s leading manufacturer of commercial airplanes, is operating with the help of Filipino engineers and other staff, as well as in Dyson—a British company that sells top-of-the-line hairdryers and vacuum cleaners—which has relocated its major production facilities in the Philippines because majority of its engineers are Filipino.

“We can help expand the footprint of our manufacturing industry by making it known across the world that we are in fact already doing such ‘globally connected’ things.  That we are already operating on a world-class level,” he added.

Pursuing this, however, is no easy task and requires more than just marketing and advertisement skills, according to Angara.

Aside from innovation, fundamental problems such as cost of doing business, power and water rates, wages, uncertainty over tax incentives and tax reforms must be addressed, he said. “These are the issues we intend to resolve with a renewed term in the Senate.”

Angara said the “Made in the Philippines” campaign could also mean “Service by Filipinos,” as he cited the country’s track record with the information technology-business process outsourcing (IT-BPO) sector where Filipinos are able to masterfully leverage their ability to speak English fluently and impeccable service culture.

Based on the latest data, approximately 1.2 million people are directly employed in BPOs, with revenues last year estimated at about $24 billion. The industry’s contribution to job creation alone has enabled the country to pare down unemployment stats, increase the ranks of the middle class, and contribute to increased consumer spending.

In the past five years, Angara noted that many top-line publications like the New York Times and BuzzFeed had in one way or another talked about the possible mainstreaming of Filipino foods like adobo, kare-kare, sisig, laing and lumpia. This is apart, of course, from the meteoric rise of local fast-food giant Jollibee, he said.

He also noted that food festivals are now being conducted in many parts of the country, such as Pampanga, the Cordilleras, Quezon, Iloilo and even as close as Las Piñas City. “Not only do these create a sense of community among residents, they also become veritable tourist attractions,” the lawmaker pointed out.

Immunization of the population expected to begin with the approval of the COVID-19 vaccination program bill-- Angara
Angara seeks exemption to donor’s tax for donations of COVID-19 vaccines and critical supplies
Angara: Growing number of out of school youth is a cause of concern
Angara: Ecommerce will help ensure the survival of MSMEs and boost economic growth
Angara bill seeks to assist LGUs in shifting to digital
2021 judiciary budget will ensure implementation of the Judges-at-Large Act and the judiciary marshal service – Angara
STATEMENT OF SEN SONNY ANGARA
ANGARA: PGH AND EAST AVENUE MEDICAL CENTER RECEIVE ADDITIONAL FUNDING UNDER THE 2021 GAA TO SERVE MORE FILIPINOS IN NEED OF MEDICAL ATTENTION
PCMC receives additional support under the 2021 GAA to provide even better services for children in need of medical attention-- Angara
Statement of Sen. Sonny Angara on the signing of the 2021 GAA
Christmas message of Sen. Sonny Angara
Angara: Displaced workers will continue to receive assistance under the 2021 budget
Improved internet services even in far flung areas expected with the increase in the budget for the National Broadband Program-- Angara
Angara-- New and unfunded laws will receive funding under the 2021 GAA
Improved health responses needed to boost consumer confidence and spur economic growth -- Angara
Angara wants more public hospitals and medical professionals to ensure all Filipinos are provided with quality health care
Angara wants public libraries to provide essential services to learners under the new normal
Statement of Sen. Sonny Angara on the transmittal of the 2021 GAB by the House of Representatives
Angara bats for the naturalization of Angelo Kouame
Angara pushes for survivorship benefits for members of the National Prosecution Service
END_OF_DOCUMENT_TOKEN_TO_BE_REPLACED