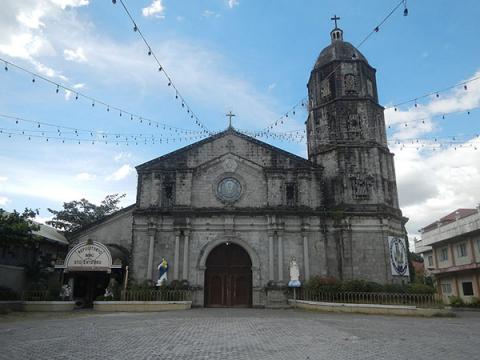 Reelectionist Senator Sonny Angara urged the government and the private sector to work together in restoring centuries-old churches in Pampanga that were damaged by the magnitude 6.1 earthquake, saying these structures are considered “national treasures” that must be preserved for future generations.

“Regardless of one’s faith, these churches are part of our cultural and national heritage. It is our legacy from the past, what we live with today, and what we pass on to future generations,” Angara said.

The National Historical Commission of the Philippines (NHCP) recently said it would ask Malacañang to release calamity funds or include in the 2020 national budget appropriations to restore the Pampanga heritage churches.

It was reported that 24 heritage churches in the province had been closed due to earthquake damage. These include Santa Catalina de Alexandria in Porac, San Agustin in Lubao, Metropolitan Cathedral of San Fernando, Holy Rosary and Archdiocesan Shrine of Christ Our Lord of the Holy Sepulcher in Angeles City, Saint James the Apostle in Guagua, Santa Rita de Cascia in Santa Rita, and Santa Monica in Minalin.

Angara said the National Commission for Culture and the Arts (NCCA) also has an endowment fund intended for the restoration of damaged heritage structures, as provided for under Republic Act 10066 or the National Cultural Heritage Act, which the lawmaker from Aurora had principally authored.

He said that Section 7 of the law explicitly provides that “all cultural properties declared as national cultural treasures and national historical landmarks, sites or monuments shall be entitled to priority government funding for protection, conservation and restoration.”

Meanwhile, Angara also called on the private sector to step in to hasten the repair and reconstruction of the damaged churches, saying the restoration of heritage sites is not only the duty of the government.

Under the heritage law, incentives are extended to the private sector for supporting conservation and restoration of national cultural treasures under the NCCA’s Conservation Incentive Program.

Angara’s father—the late Senate President Edgardo Angara—authored the legislation that created the NCCA, the overall policy-making body, coordinating, and grant-giving agency for the preservation, development and promotion of Philippine arts and culture.

Angara: Pilot implementation of face-to-face classes needed before resumption nationwide
Immunization of the population expected to begin with the approval of the COVID-19 vaccination program bill-- Angara
Angara seeks exemption to donor’s tax for donations of COVID-19 vaccines and critical supplies
Angara: Growing number of out of school youth is a cause of concern
Angara: Ecommerce will help ensure the survival of MSMEs and boost economic growth
Angara bill seeks to assist LGUs in shifting to digital
2021 judiciary budget will ensure implementation of the Judges-at-Large Act and the judiciary marshal service – Angara
STATEMENT OF SEN SONNY ANGARA
ANGARA: PGH AND EAST AVENUE MEDICAL CENTER RECEIVE ADDITIONAL FUNDING UNDER THE 2021 GAA TO SERVE MORE FILIPINOS IN NEED OF MEDICAL ATTENTION
PCMC receives additional support under the 2021 GAA to provide even better services for children in need of medical attention-- Angara
Statement of Sen. Sonny Angara on the signing of the 2021 GAA
Christmas message of Sen. Sonny Angara
Angara: Displaced workers will continue to receive assistance under the 2021 budget
Improved internet services even in far flung areas expected with the increase in the budget for the National Broadband Program-- Angara
Angara-- New and unfunded laws will receive funding under the 2021 GAA
Improved health responses needed to boost consumer confidence and spur economic growth -- Angara
Angara wants more public hospitals and medical professionals to ensure all Filipinos are provided with quality health care
Angara wants public libraries to provide essential services to learners under the new normal
Statement of Sen. Sonny Angara on the transmittal of the 2021 GAB by the House of Representatives
Angara bats for the naturalization of Angelo Kouame
END_OF_DOCUMENT_TOKEN_TO_BE_REPLACED