ANGARA ASKS KIN OF OFWs IN LIBYA: CONVINCE YOUR LOVED ONES TO COME HOME 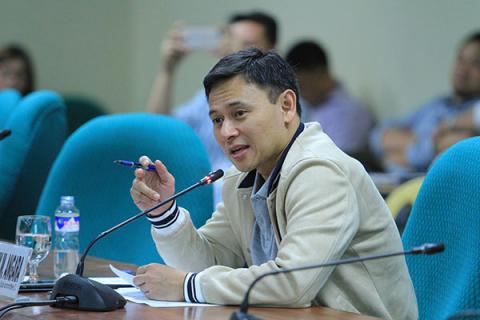 Reelectionist Senator Sonny Angara is urging the families of overseas Filipino workers (OFWs) in Libya to convince their loved ones to return to the Philippines as soon as possible after the Department of Foreign Affairs (DFA) raised to the highest level the crisis alert in the North African state due to intense fighting around the capital city of Tripoli.

The DFA declared Alert Level 4, which requires mandatory repatriation and a total ban on OFW deployment to Libya, where more than 3,500 Filipinos are currently employed.

“We ask the relatives of our OFWs in Libya to persuade their loved ones to heed the government’s forced evacuation order and proceed to the Philippine embassy in Tripoli so that repatriation procedures can be initiated as soon as possible,” Angara said.

The lawmaker from Aurora, who is running under the platform “Alagang Angara,” also reiterated his appeal to the government ensure the safe return of Filipinos who wish to avail of the repatriation program.

According to Angara, those who will return home should not worry because the government is ready to take care of their needs, citing the benefits provided under Republic Act 10801 that institutionalized and strengthened the Overseas Workers Welfare Administration (OWWA).

Angara co-authored and sponsored RA 10801, also known as the OWWA Act of 2016, as then chairman of the Senate Committee on Labor. The law provides a wide array of services and benefits to OFWs funded by the $25 membership fee collected from them every two years.

These benefits and services, according to Angara, are just a small token of gratitude for the valuable contribution of OFWs to the overall national development effort. “We have to give back to our OFWs, whose remittances have kept the Philippine economy afloat for many years,” the senator said.

On top of the OWWA funds, Angara said the Senate allocated an additional P100 million for the emergency repatriation program of the Department of Labor and Employment (DOLE) under the 2019 national budget.

“The additional funding would provide the department a standby fund for the repatriation of distressed OFWs in cases of outbreaks or crisis in their host countries,” said Angara, who sponsored the DOLE’s 2019 budget being the vice chair of the Senate finance committee.

Angara: Pilot implementation of face-to-face classes needed before resumption nationwide
Immunization of the population expected to begin with the approval of the COVID-19 vaccination program bill-- Angara
Angara seeks exemption to donor’s tax for donations of COVID-19 vaccines and critical supplies
Angara: Growing number of out of school youth is a cause of concern
Angara: Ecommerce will help ensure the survival of MSMEs and boost economic growth
Angara bill seeks to assist LGUs in shifting to digital
2021 judiciary budget will ensure implementation of the Judges-at-Large Act and the judiciary marshal service – Angara
STATEMENT OF SEN SONNY ANGARA
ANGARA: PGH AND EAST AVENUE MEDICAL CENTER RECEIVE ADDITIONAL FUNDING UNDER THE 2021 GAA TO SERVE MORE FILIPINOS IN NEED OF MEDICAL ATTENTION
PCMC receives additional support under the 2021 GAA to provide even better services for children in need of medical attention-- Angara
Statement of Sen. Sonny Angara on the signing of the 2021 GAA
Christmas message of Sen. Sonny Angara
Angara: Displaced workers will continue to receive assistance under the 2021 budget
Improved internet services even in far flung areas expected with the increase in the budget for the National Broadband Program-- Angara
Angara-- New and unfunded laws will receive funding under the 2021 GAA
Improved health responses needed to boost consumer confidence and spur economic growth -- Angara
Angara wants more public hospitals and medical professionals to ensure all Filipinos are provided with quality health care
Angara wants public libraries to provide essential services to learners under the new normal
Statement of Sen. Sonny Angara on the transmittal of the 2021 GAB by the House of Representatives
Angara bats for the naturalization of Angelo Kouame
END_OF_DOCUMENT_TOKEN_TO_BE_REPLACED