Angara frustrated over inefficiencies of DepEd based on 2018 COA report

How do we expect our youth to be prepared for college and to find decent jobs later on in life when they're not getting the best education that they deserve in grade school and high school?

Senator Sonny Angara was incensed by the disappointing accomplishment report of the Department of Education (DepEd) for 2018, which showed how poorly the agency is performing to the detriment of our students. 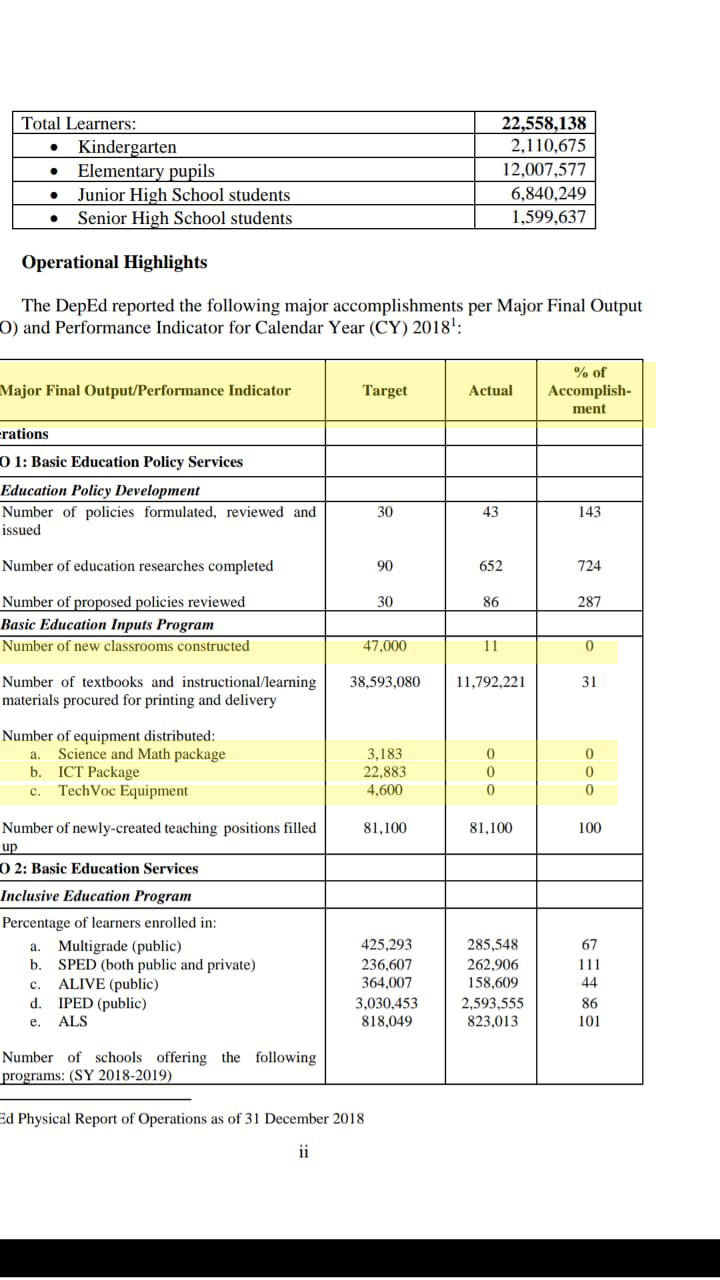 “Almost 27 million textbooks were not delivered for the use of the students and there were also zero deliveries for some items necessary for the success of the K to 12 program. We are supposed to be showing progress in our educational system, but after seeing these figures, clearly we stil have a long way to go,” Angara said.

“Education always gets the biggest share of the government’s funds and rightfully so because this will ensure the country remains competitive with its people as its backbone. So why are we shortchanging our people on this front with such inefficiencies?” Angara added.

Angara is set to file a resolution next week to look into the chronic delays in the procurement and distribution to the end users of critical Basic Education Facilities items and the adverse effects of this on basic education outcomes, including the performance of students.

The DepEd, in its performance report cited by the Commission on Audit in its 2018 report on the agency, said it was supposed to construct 47,000 new classrooms for the year but only managed to complete 11.

The DepEd was also supposed to distribute 38.5 million textbooks and instructional/learning materials for the students and teachers, but was able to deliver 11.8 million.

During its audit, COA also discovered that 3.4 million copies of instructional materials worth P113.7 million procured from 2014 to 2017 were left rotting inside the warehouses of the DepEd.

Various errors were also noted by the COA in some of the textbooks for Grade 3 students, the cost of which was pegged at P254.3 million.

A total of 3,183 science and math packages, which consists of equipment essential to learning under the K to 12 program, was targeted for distribution in 2018, but none of these were delivered to their intended recipients.

In the DepEd report, the state auditors saw that there were undelivered science and mathematics equipment (SME); unutilized SMEs due to excessive quantities allocated and delivered to schools that did not need them; there was lack of knowledge and proper training of teachers to use these equipment; and a lack of storage rooms or laboratories to house these items.

Even equipment for the technical-vocational-livelihood (TVL) track of the K to 12 program, amounting to 4,600 units did not reach the schools.

The COA found that items for the P4.6 billion redesigned technical-vocational high school program for school year 2016 to 2017 were also unutilized or underutilized.

State auditors noted the late construction of buildings and deferred course offerings for the TVL tracks, which contributed to the dismal performance in this area.

Angara pushes for survivorship benefits for members of the National Prosecution Service
The President's first report on the implementation of the Bayanihan 2
Angara calls for extension of waiver on fees for digital transactions of banks and mobile payment services
Angara to Comelec: Work on making it easier for seniors and PWDs to vote during elections
Angara: There should be no delays in the implementation of Bayanihan 2
Angara to CHEd and SUCs: Let’s work together in keeping Filipino graduates in the Philippines
Angara says 2022 deadline for registration of 90 million Filipinos to PhilSys ID should be achieved without delay
Statement of Sen. Sonny Angara  (law sponsor) on the enactment of Bayanihan 2
Statement of Sen. Sonny Angara  (law sponsor) on the enactment of Bayanihan 2
Institutionalizing digital payment systems needed to prevent the spread of diseases and for adopting to the new normal-- Angara
Bayanihan 2 supports domestic industries with Buy Local provisions
Sen. Sonny Angara on talks of a revolutionary government
STATEMENT OF SEN. ANGARA AFTER THE SENATE RECEIVED THE COPY OF THE PROPOSED 2021 BUDGET DOCUMENTS
Angara: Bayanihan 2 provides relief for consumers, households, employees and businesses affected by COVID-19
Hiring of more emergency health personnel and contact tracers to be funded by Bayanihan 2-- Angara
Lack of transparency and accountability hound PhilHealth-- Angara
Plug PhilHealth loopholes and leakages immediately—Angara
Senate responds to President Duterte’s Call to Pass Bayanihan 2-- Angara
Angara wants to hear the administration’s plans for the sectors affected by COVID-19 in SONA 2020
Angara wants pandemics, epidemics and health emergencies included in primary and secondary education
END_OF_DOCUMENT_TOKEN_TO_BE_REPLACED