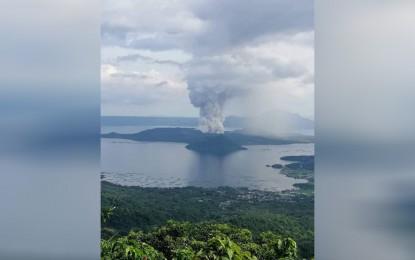 Senator Sonny Angara called on the Department of Labor and Employment (DOLE) to utilize the funds under its budget for the assistance to workers displaced by the eruption of the Taal Volcano.

As chairman of the Committee on Finance that went over the 2020 General Appropriations Act, Angara pointed out that the DOLE has over P120 million that it can tap to provide assistance to the displaced workers, particularly those who reside in the areas within the vicinity of Taal in Cavite and Batangas.

There are now over 40,000 evacuees from Cavite and Batangas who were forced to flee their homes because of the eruption of the volcano.

Apart from the lack of food, clothing and shelter, many of the evacuees also have to cope with their loss of employment because of the disaster.

“The impact of the eruption of Taal Volcano is wide-ranging. Most of the affected families have lost everything, including their livelihood and it is the obligation of the government to provide them with support during times like these,” Angara said.

“We must do everything to get these communities back on their feet again at the soonest possible time. The entire nation must be behind all those affected by the eruption,” Angara added.

Under the 2020 General Appropriations Act, the DOLE has P112.62 million for its Adjustment Measures Program and P6.8 million for its Tulong Panghanapbuhay sa Ating Disadvantaged/Displaced Workers or TUPAD.

TUPAD is a community-based package of assistance that provides emergency employment for displaced workers, underemployed and seasonal workers, for a minimum period of 10 days, but not to exceed a maximum of 30 days, depending on the nature of work to be performed.

Under TUPAD, beneficiaries will be provided with basic orientation on safety and health, personal protective equipment, and enrolment in group micro-insurance.

Once the emergency employment program is completed, the Technical Education and Skills Development Authority or its accredited training institutions will be tapped to conduct the skills training for the TUPAD beneficiaries under its Training for Work Scholarship Program.

As for the DOLE’s Adjustment Measures Program, a comprehensive package of assistance will be provided to the workers affected by the eruption of Taal. The program aims to enhance the employability and competitiveness of the displaced workers.

For permanent or regular employees, they are entitled to receive financial relief support equivalent to 50 percent of the prevailing minimum wage in the region for a maximum period of six months.

In the case of non-permanent or casual employees, the financial support will be equivalent to 25 percent of the prevailing minimum wage in the region for a maximum period of three months.

“We urge the DOLE to immediately issue the guidelines for the programs and to reach out to the individuals in the affected areas. For the employers of the affected individuals, we appeal for their understanding. It will give them some peace of mind to know that they will have their old jobs waiting for them once they are able to resume their normal lives,” Angara said.

Angara to Comelec: Work on making it easier for seniors and PWDs to vote during elections
Angara: There should be no delays in the implementation of Bayanihan 2
Angara says 2022 deadline for registration of 90 million Filipinos to PhilSys ID should be achieved without delay
Angara to CHEd and SUCs: Let’s work together in keeping Filipino graduates in the Philippines
Statement of Sen. Sonny Angara  (law sponsor) on the enactment of Bayanihan 2
Statement of Sen. Sonny Angara  (law sponsor) on the enactment of Bayanihan 2
Institutionalizing digital payment systems needed to prevent the spread of diseases and for adopting to the new normal-- Angara
Bayanihan 2 supports domestic industries with Buy Local provisions
Sen. Sonny Angara on talks of a revolutionary government
STATEMENT OF SEN. ANGARA AFTER THE SENATE RECEIVED THE COPY OF THE PROPOSED 2021 BUDGET DOCUMENTS
Angara: Bayanihan 2 provides relief for consumers, households, employees and businesses affected by COVID-19
Hiring of more emergency health personnel and contact tracers to be funded by Bayanihan 2-- Angara
Lack of transparency and accountability hound PhilHealth-- Angara
Plug PhilHealth loopholes and leakages immediately—Angara
Senate responds to President Duterte’s Call to Pass Bayanihan 2-- Angara
Angara wants to hear the administration’s plans for the sectors affected by COVID-19 in SONA 2020
Angara wants pandemics, epidemics and health emergencies included in primary and secondary education
Angara pushes for the registration and database of informal workers
Angara urges more COVID-19 survivors to donate blood plasma for severely ill patients
Ulat sa Bayan ni Senator Sonny Angara (2019-2020)
END_OF_DOCUMENT_TOKEN_TO_BE_REPLACED