ANGARA: NOT ENOUGH HEALTH WORKERS TO CARE FOR SENIOR CITIZENS 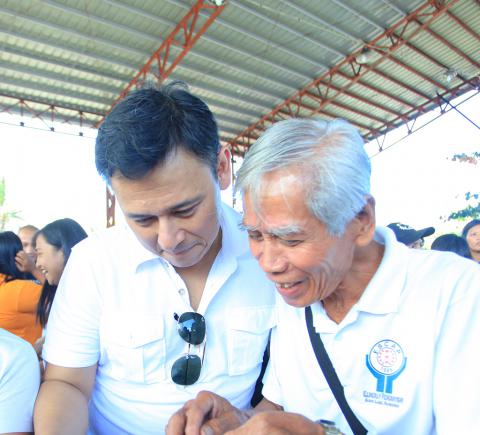 Senator Sonny Angara has expressed alarm over the lack of professionals specializing in the care of the elderly in the Philippines, which puts to question the country’s ability to meet the healthcare needs of its adult population.

According to Angara, a champion of senior citizens’ rights and welfare, the country is facing a serious shortage of geriatricians or medical doctors who are specially trained to evaluate and manage the unique healthcare needs and treatment preferences of older people.

Citing a report from Retirement and Healthcare Coalition, Angara said there were only 140 geriatric doctors operating in the country and without specialized geriatric nurses.

“Assuming that there are around 8 million senior citizens in the country, a geriatric doctor is tasked to cater to the varied and immediate needs of around 57,000 elderlies,” Angara said. “This means that if they wanted to attend to everyone, a doctor will have to see around 150 senior citizen patients for 365 days straight.”

Out of 140 or so geriatric doctors across the country, the senator further said, about half do not have actual clinic or hospital experience, largely due to lack of facilities where health professionals can train for this specialty.

“There needs to be a venue where our geriatricians can hone their skills,” Angara said.

In the Philippines, only St. Luke’s Medical Center (SLMC) has a dedicated Geriatric Center. “And quite frankly, hospitals like SLMC are not the kind of facility that the elderly in the marginal sector could easily access,” he lamented.

According to Angara, this situation bolsters the need to strengthen the capability of the state-run National Center for Geriatric Health (NCGH), the country’s first center for aged care which was established in 2010 as a training and research facility for geriatric medicine and gerontology.

Angara said the proposal to institutionalize the Philippine Institute of Aging—a measure initiated by his father, the late Senate President Edgardo Angara—should be pursued in order to improve research related to older Filipinos to promote their welfare and needs.

He admitted that he inherited this advocacy for the elderly from his father, the reason he pushed for the expansion of the Senior Citizens Act in 2010 to include the value-added tax (VAT) exemption on particular goods and services and the monthly stipend of PHP500 to all indigent senior citizens.

The senator’s father was credited for the implementation of the Senior Citizens Act of 1992, also known as the Angara Law.

Now, the younger Angara  is fighting for the proposed Expanded Social Pension Act, which seeks to double the amount and widen the scope to cover those without any form of pension. #

Angara: Benefits for health workers to continue even after Bayanihan 2 expiration on June 30
EASTER SUNDAY MESSAGE OF SEN. SONNY ANGARA
Statement of Sen. Angara on the procurement of vaccines by the private sector
SK reform bill hurdles committee level-- Angara
Angara: Kouame an asset to Philippine basketball
Angara pushes for 100% increase in PDIC deposit insurance coverage
Angara: Pilot implementation of face-to-face classes needed before resumption nationwide
Immunization of the population expected to begin with the approval of the COVID-19 vaccination program bill-- Angara
Angara seeks exemption to donor’s tax for donations of COVID-19 vaccines and critical supplies
Angara: Growing number of out of school youth is a cause of concern
Angara: Ecommerce will help ensure the survival of MSMEs and boost economic growth
Angara bill seeks to assist LGUs in shifting to digital
2021 judiciary budget will ensure implementation of the Judges-at-Large Act and the judiciary marshal service – Angara
STATEMENT OF SEN SONNY ANGARA
ANGARA: PGH AND EAST AVENUE MEDICAL CENTER RECEIVE ADDITIONAL FUNDING UNDER THE 2021 GAA TO SERVE MORE FILIPINOS IN NEED OF MEDICAL ATTENTION
PCMC receives additional support under the 2021 GAA to provide even better services for children in need of medical attention-- Angara
Statement of Sen. Sonny Angara on the signing of the 2021 GAA
Christmas message of Sen. Sonny Angara
Angara: Displaced workers will continue to receive assistance under the 2021 budget
Improved internet services even in far flung areas expected with the increase in the budget for the National Broadband Program-- Angara
END_OF_DOCUMENT_TOKEN_TO_BE_REPLACED