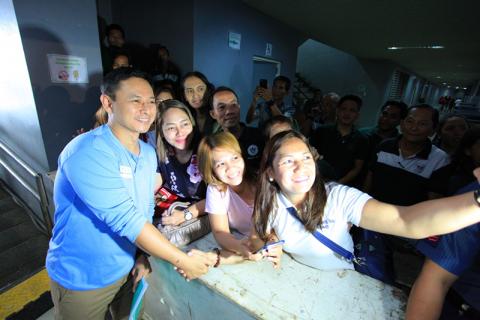 LUCENA CITY—Reelectionist Senator Sonny Angara said the government should pay teachers more if it wants to improve the quality of education in Philippine public schools.

“Quality education begins with quality teachers. And to have good quality teachers in our public schools we need to pay them well,” Angara said, as he reiterated his appeal to the government to give teachers a reasonable pay increase.

He added: “I am sure money is not the overriding motivation for educators because many of them are dedicated and they love what they are doing. But teachers are not martyrs; they should be valued by society and compensated accordingly.”

Earlier this year, President Rodrigo Duterte announced that his promise to increase the take-home pay of public school teachers could finally happen this year. He, however, did not mention how much the increase would be, but it was definitely on top of the fourth and last tranche of salary increases for all government workers to be implemented this year.

Last year, the President also vowed to raise the salary of teachers after the basic pay of military and police personnel had been doubled.

Angara expressed hope that the teacher’s pay adjustment would be equivalent or close to the rate he has been pushing since 2016 when he filed Senate Bill 135.

Under the bill, the minimum salary grade level of teachers will be adjusted from Salary Grade 11 to 19, or double their current monthly base pay of P20,179 to P42,099.

According to Angara, the relatively low pay for teachers discourages many from entering the profession, and the pay hike would attract more qualified and competent educators to teach in public schools.

He also said that dedicated teachers in public schools, especially those experiencing teacher shortages, would not be compelled to leave the classroom in order to support their family.

“Our teachers are considered to be the heart of the educational system. The government needs to give priority to their welfare and interests,” Angara pointed out.

“Definitely, this would lead to an improvement in the quality of education in our public school system,” he added.

Angara to Comelec: Work on making it easier for seniors and PWDs to vote during elections
Angara: There should be no delays in the implementation of Bayanihan 2
Angara says 2022 deadline for registration of 90 million Filipinos to PhilSys ID should be achieved without delay
Angara to CHEd and SUCs: Let’s work together in keeping Filipino graduates in the Philippines
Statement of Sen. Sonny Angara  (law sponsor) on the enactment of Bayanihan 2
Statement of Sen. Sonny Angara  (law sponsor) on the enactment of Bayanihan 2
Institutionalizing digital payment systems needed to prevent the spread of diseases and for adopting to the new normal-- Angara
Bayanihan 2 supports domestic industries with Buy Local provisions
Sen. Sonny Angara on talks of a revolutionary government
STATEMENT OF SEN. ANGARA AFTER THE SENATE RECEIVED THE COPY OF THE PROPOSED 2021 BUDGET DOCUMENTS
Angara: Bayanihan 2 provides relief for consumers, households, employees and businesses affected by COVID-19
Hiring of more emergency health personnel and contact tracers to be funded by Bayanihan 2-- Angara
Lack of transparency and accountability hound PhilHealth-- Angara
Plug PhilHealth loopholes and leakages immediately—Angara
Senate responds to President Duterte’s Call to Pass Bayanihan 2-- Angara
Angara wants to hear the administration’s plans for the sectors affected by COVID-19 in SONA 2020
Angara wants pandemics, epidemics and health emergencies included in primary and secondary education
Angara pushes for the registration and database of informal workers
Angara urges more COVID-19 survivors to donate blood plasma for severely ill patients
Ulat sa Bayan ni Senator Sonny Angara (2019-2020)
END_OF_DOCUMENT_TOKEN_TO_BE_REPLACED