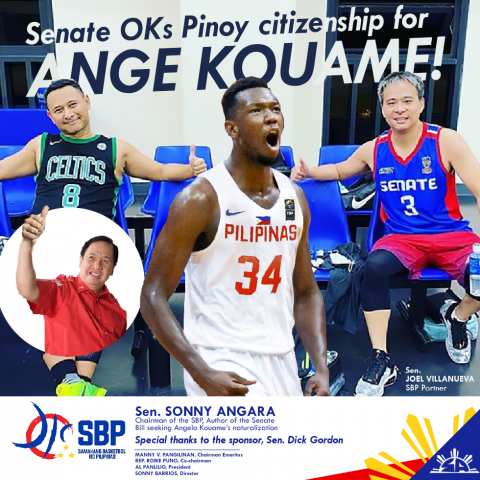 Senator Sonny Angara sees the addition of Ange Kouame to the Gilas Pilipinas national basketball team as a boost to the Philippines’ chances in qualifying for the Tokyo Olympics.


Angara, the chairman of the Samahang Basketbol ng Pilipinas (SBP), is the principal author of Senate Bill 1892 granting Philippine citizenship to Kakou Ange Franck Williams Kouame through naturalization, which was approved on third and final reading today.

Angara thanked his colleagues in the Senate for the support given to Kouame, particularly Committee on Justice and Human Rights chairman Richard Gordon, who sponsored and defended the bill in plenary.

While waiting for the approval of his naturalization, the 6-foot-10 Ivorian recruit Kouame has already been training with Gilas Pilipinas in preparation for the FIBA Asia Cup Qualifying Windows last November 2020 and February 2021.

Once the bill is signed by the President, Kouame will officially be a member of Gilas Pilipinas and will provide the national squad with much needed support when it competes in the FIBA Olympic Qualifying Tournament (OQT) in Belgrade, Serbia this coming June 29 to July 4.

The Philippines has been given another shot to qualify for the Tokyo Olympics after New Zealand decided to pull out of the tournament in Belgrade.

According to FIBA, the Philippines was selected to replace New Zealand by virtue of Gilas Pilipinas being the next best team in the Asia-Oceania Region in the FIBA world ranking for men’s basketball.

Angara echoed the statement made by Gilas Pilipinas head coach Jong Uichico that Kouame is the missing piece for the national squad to move forward, not only because of his height, but his versatility, both as an offensive player and a defensive force in the middle.

“Kouame is primed to make a significant contribution to Philippine basketball. He is ready to play for the national team. More importantly, he is more than willing to represent our country,” Angara said.

“Ange is still very young and his game is still developing. This early we have already seen how good he is playing in the UAAP. He will only improve with his continued training at the hands of our very capable coaching staff and trainers in Gilas Pilipinas,” Angara added.

Angara: It is time to transform the Philippines from a consuming economy to one that produces
Finance committee to conduct a comprehensive review of government’s programs on industrialization and jobs generation-- Angara
Angara wants a review of all laws and programs for the Filipino youth
DTI gets unprecedented increase in 2020 budget for Tatak Pinoy Initiatives-- Angara
Angara seeks an increase in the bed capacity of the East Avenue Medical Center
Senator Angara urges immediate assessment after alert level lowered for Taal Volcano
Statement of Senator Angara on the sudden demise of Kobe Bryant
2020 GAA has over P300 million for the implementation of the Innovation Act-- Angara
DICT gets P6.2 billion hike in its 2020 budget to make the government more digital and interconnected
Angara urges DOLE to provide emergency employment and assistance to workers displaced by the Taal eruption
Senator Sonny Angara on the eruption of the Taal Volcano
Statement of Sen. Sonny Angara on the bushfire crisis in Australia
Angara—The creation of judges-at-large posts will result in the faster resolution of cases in the courts
Angara- Revival of the EDCOM is needed to address the new challenges of the Philippine education sector
Wish of Sen Sonny Angara for the New Year
Education remains top priority under the 2020 national budget- Angara
Angara-- Civil servants to enjoy pay hikes starting January 1, 2020 under SSL-5
With the national team’s impressive SEA Games performance, Angara pushes for bigger cash incentives for medalists
Angara files resolutions honoring the Philippine National Arnis Team and Majority Leader Zubiri, as the father of the sport
Angara seeks to remember and honor the hero cop killed while protecting civilians
END_OF_DOCUMENT_TOKEN_TO_BE_REPLACED