ANGARA BATS FOR 24/7 LIBRARY IN EVERY LGU 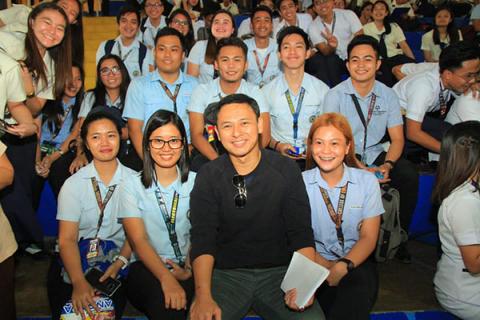 Reelectionist Senator Sonny Angara is urging mayors to consider constructing public libraries in their cities or towns that can accommodate students who wish to study beyond the regular library hours.

The senator, who is running under the platform “Alagang Angara,” said that a 24/7 library with free WiFi access is extremely helpful to students who spend the late-night hours cramming, as it allows them to study when they want and when is convenient to them.

“Providing a 24-hour library ensures that students can study in a flexible manner at a place that is conducive and hassle-free instead of going to coffee shops or fast-food chains where they need to shell out money for food or drink so they will be allowed to gain Internet access and get their schoolwork done,” said Angara, who is scheduled to attend today’s proclamation rally of his party mates in Laban ng Demokratikong Pilipino (LDP) in Cebu City, home of the first public library in the country which is open 24 hours, seven days a week.

The Cebu City Public Library began its 24/7 operations in March last year on orders of LDP reelectionist Mayor Tomas Osmeña, who got the idea from a comment on his Facebook page of an engineering student wishing the city government could open the library even during late night hours.

Aside from Cebu City, other local government units with 24/7 public libraries are the cities of Makati and Quezon in Metro Manila.

Angara, chair of the Senate Committee on Local Government, said the initiative of the Cebu City government “ought to be replicated in other parts of the country.”

“We hope other mayors will follow this example set by Mayor Osmeña, who values the importance of education and cares about the welfare of students in his city,” said Angara, head of LDP who himself is a champion of people’s right to education.

Free education—from kindergarten to college—is one of Angara’s advocacies that he co-authored the Free College Education Law and the Free Kindergarten Law. His father, the late Senate President Edgardo Angara, was the author of the Free High School Act that ensured secondary education even for the poorest.

Angara is also one of the authors of the recently enacted Student Fare Discount Act, which institutionalized and expanded the 20-percent student fare discount to include air and sea transport.

Earlier in March, Angara urged the government to step up its implementation of free Internet access in public places under Republic Act 10929, particularly in state universities and colleges (SUCs) across the country.

Under the law signed by President Duterte in 2017 creating the Free Internet Access Program, the Department of Information and Communications Technology (DICT) is the lead agency in carrying out the government’s free WiFi program in public places, including government-run educational institutions.

Angara, however, disclosed that out of the 112 SUCs covered by the project, only 17 had been given the free WiFi connectivity as of December 2018, based on DICT’s data it submitted to the Senate during the last budget hearing.

Angara to Comelec: Work on making it easier for seniors and PWDs to vote during elections
Angara: There should be no delays in the implementation of Bayanihan 2
Angara says 2022 deadline for registration of 90 million Filipinos to PhilSys ID should be achieved without delay
Angara to CHEd and SUCs: Let’s work together in keeping Filipino graduates in the Philippines
Statement of Sen. Sonny Angara  (law sponsor) on the enactment of Bayanihan 2
Statement of Sen. Sonny Angara  (law sponsor) on the enactment of Bayanihan 2
Institutionalizing digital payment systems needed to prevent the spread of diseases and for adopting to the new normal-- Angara
Bayanihan 2 supports domestic industries with Buy Local provisions
Sen. Sonny Angara on talks of a revolutionary government
STATEMENT OF SEN. ANGARA AFTER THE SENATE RECEIVED THE COPY OF THE PROPOSED 2021 BUDGET DOCUMENTS
Angara: Bayanihan 2 provides relief for consumers, households, employees and businesses affected by COVID-19
Hiring of more emergency health personnel and contact tracers to be funded by Bayanihan 2-- Angara
Lack of transparency and accountability hound PhilHealth-- Angara
Plug PhilHealth loopholes and leakages immediately—Angara
Senate responds to President Duterte’s Call to Pass Bayanihan 2-- Angara
Angara wants to hear the administration’s plans for the sectors affected by COVID-19 in SONA 2020
Angara wants pandemics, epidemics and health emergencies included in primary and secondary education
Angara pushes for the registration and database of informal workers
Angara urges more COVID-19 survivors to donate blood plasma for severely ill patients
Ulat sa Bayan ni Senator Sonny Angara (2019-2020)
END_OF_DOCUMENT_TOKEN_TO_BE_REPLACED