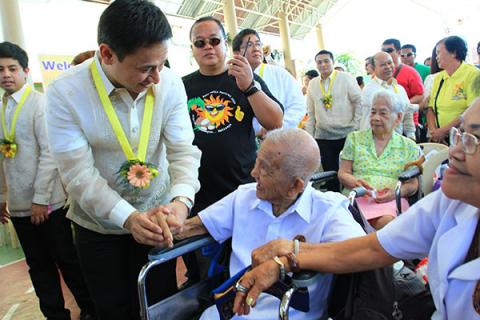 Reelectionist Senator Sonny Angara urged the Commission on Elections (Comelec) to strengthen its efforts to fully implement a law providing accessible polling places for voters with disability and senior citizens to ensure that they will be able to conveniently exercise their right of suffrage in the May 13 midterm election.

Despite the enactment of Republic Act 10366 in 2013 and the regular issuances by the Comelec requiring polling precincts to be friendlier to persons with disability (PWD) and the elderly, Angara noted that recent elections were still marred by complaints on the lack of designated areas to make it easy for them to vote.

Some “vulnerable voters” even had to climb the stairs just so they could vote, he said.

“I hope that this coming election, the Comelec will be more proactive in ensuring that not a single PWD or senior citizen is disenfranchised only because our polling centers cannot accommodate their needs,” said the lawmaker, who is seeking another full six-year term in the Senate under the platform “Alagang Angara.”

RA 10366 mandates the Comelec to set up polling precincts exclusively for PWDs and senior citizens that are located on the ground level—preferably near the entrance—and without physical barriers. This is to make sure that every registered voter has an equal chance of getting to the polling precinct, and filling out and submitting the ballots.

The law also provides for sensitivity training programs for people who perform electoral duties, including field officers, members of the Board of Election Inspectors, and accredited citizen’s arms to familiarize themselves with the needs of PWDs and senior citizens.

According to the National Council on Disability Affairs (NCDA), many PWD voters had been disenfranchised during the 2016 presidential elections because polling places lacked ramps or access, as well as volunteers to assist them.

Also in 2016, media organizations reported various incidents of senior citizens struggling to climb stairs to reach their polling precincts, some of them even suffered accidents. Similar incidents were reported during the barangay elections last year.

Angara is a known champion of the rights and welfare of PWDs and senior citizens. He was behind the landmark legislation exempting PWDs and seniors from the payment of 12 percent value-added tax so they can enjoy fully the 20-percent discount provided in the laws authored by his father, the late Senate President Edgardo Angara, who was dubbed as the “Father of the Senior Citizens Law.”

The older Angara was also the author of RA 9442 or the Magna Carta for Disabled Persons, which grants PWDs 20 percent discount on the purchase of medicines in all drugstores, medical and dental services including diagnostic and laboratory fees, and professional fees of attending doctors.

The 20-percent discount could also be availed of in establishments like hotels and restaurants, admission fees on theaters and movie houses, and on transportation fare for domestic land, air and sea travel.

While his father authored the original Senior Citizens Law, the younger Angara pushed for the VAT exemption and social pension for the elderly in RA 9994 or the Expanded Senior Citizens Act of 2010 when he was still representative of the lone district of Aurora province in Congress.

Angara wants a review of all laws and programs for the Filipino youth
DTI gets unprecedented increase in 2020 budget for Tatak Pinoy Initiatives-- Angara
Angara seeks an increase in the bed capacity of the East Avenue Medical Center
Senator Angara urges immediate assessment after alert level lowered for Taal Volcano
Statement of Senator Angara on the sudden demise of Kobe Bryant
2020 GAA has over P300 million for the implementation of the Innovation Act-- Angara
DICT gets P6.2 billion hike in its 2020 budget to make the government more digital and interconnected
Senator Sonny Angara on the eruption of the Taal Volcano
Angara urges DOLE to provide emergency employment and assistance to workers displaced by the Taal eruption
Statement of Sen. Sonny Angara on the bushfire crisis in Australia
Angara—The creation of judges-at-large posts will result in the faster resolution of cases in the courts
Angara- Revival of the EDCOM is needed to address the new challenges of the Philippine education sector
Wish of Sen Sonny Angara for the New Year
Education remains top priority under the 2020 national budget- Angara
Angara-- Civil servants to enjoy pay hikes starting January 1, 2020 under SSL-5
With the national team’s impressive SEA Games performance, Angara pushes for bigger cash incentives for medalists
Angara files resolutions honoring the Philippine National Arnis Team and Majority Leader Zubiri, as the father of the sport
Angara seeks to remember and honor the hero cop killed while protecting civilians
Health, education and social services are prioritized in the Senate committee report on the P4.1 trillion 2020 national budget—Angara
Angara wants more social welfare attaches to aide OFWs in distress
END_OF_DOCUMENT_TOKEN_TO_BE_REPLACED