ANGARA TO STUDENTS: MAKE USE OF FREE PUBLIC EDUCATION AND STUDY HARD 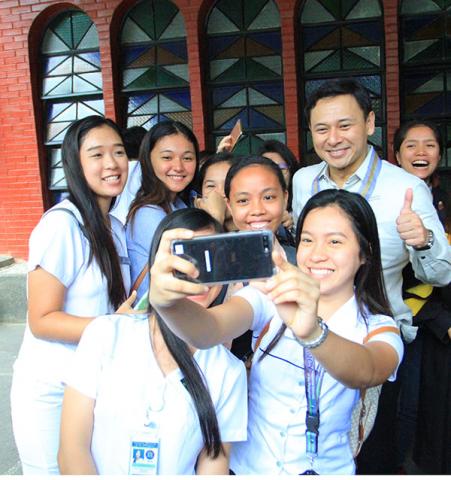 “As students, your responsibility is to study hard because that’s your passport to employment and good life,” Angara said, as the academic year came to an end. “Education is a great socioeconomic equalizer and a stepping stone to something higher and brighter.”

Free education—from kindergarten to college—is one of Angara’s advocacies that he co-authored the Free College Education Law and the Free Kindergarten Law. His father, the late Senate President Edgardo Angara, was the author of the Free High School Act that ensured secondary education even for the poorest.

The young Angara is also one of the authors of the recently enacted Student Fare Discount Act, which institutionalized and expanded the 20-percent student fare discount to include air and sea transport.

Proof that the Angaras put premium on education, the senator studied at the London School of Economics, where he finished his undergraduate degree in International Relations. After completing his law degree at the University of the Philippines College of Law, Angara went to the Harvard Law School in the United States to earn his Master of Laws degree.

Angara, chair of the Senate Committee on Ways and Means and vice chair of the Committee on Finance, earlier disclosed that the government is spending a whopping P46 billion to implement RA 10931 this year, making it the biggest budget for free college education in Philippine history.

Aside from the free tuition to more than 800,000 students in public higher education institutions (HEIs), Angara said that allowance and other financial assistance will be provided to poor students to enable them to finish their studies.

He also revealed that each of the 300,000 poor students from both public and private HEIs can get an allowance of up to P60,000 under the Tertiary Education Subsidy (TES) program.

The TES prioritizes students whose families are beneficiaries of the government’s Pantawid Pamilyang Pilipino Program or 4Ps and those studying in private schools in 214 cities and municipalities with no existing SUC or LUC.

On top of the budget for RA 10931, Angara said the Senate also allocated P1 billion for the scholarship of poor but deserving students in private universities and colleges all over the country.