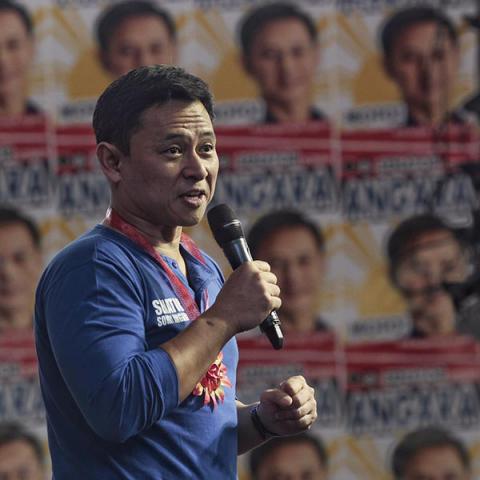 Reelectionist Senator Sonny Angara said the government should pay serious attention to developing agriculture and infrastructure in the provinces if it wants to eradicate extreme poverty and hunger, which victims are mostly the rural poor.

The lawmaker from Aurora noted that majority of poor and undernourished people live in rural areas, where small-scale farming forms the backbone of their local economy.

“The government needs to make a substantial investment in rural areas and in agriculture if it is serious about reducing poverty and hunger and promoting inclusive growth,” said Angara, who is scheduled to attend today the Farmers and Fisherfolk Congress, one of the activities lined up for this year’s Panaad sa Negros Festival in Bacolod City.

The agriculture sector is home to 60 percent of the nation’s poorest, Angara said. Latest data from the Philippine Statistics Authority (PSA) showed that the poverty incidence among Filipinos was at 21 percent, or about 23.1 million people, based on the country’s population of 110 million as of first semester of 2018.

Angara said the agriculture sector would require a much bigger budget to strengthen support services for farmers in the form of better irrigation system, post-harvest facilities and other farm subsidies that would enable them to produce enough food to feed the country’s growing population.

During the past few years, the Department of Agriculture (DA) has been receiving a measly share of the national budget, getting only less than 2 percent of the total budgetary pie.

For 2017 and 2018, the DA’s budget was P45 billion and P53 billion, respectively. This year, the DA is getting P49 billion under the P3.7 trillion General Appropriations Bill that is awaiting President Duterte’s signature.

Angara said that a “well-planned and well-targeted investment” in agriculture could help the country achieve inclusive growth and food security.

Angara said the agriculture sector still holds the potential to create jobs and build stronger rural communities. “Agricultural and rural development can create jobs and livelihoods for small farmers and the landless, while producing food and raw materials for the urban economy,” he said.

Based on the results of the January 2019 Labor Force Survey conducted by the PSA, the agriculture sector suffered 1.7 million job losses, which primarily contributed to the decline in the actual number of employed Filipinos in January this year compared to the same period last year.

The survey showed that the total registered employment decreased by 0.9 percent to 41.1 million in January, or equivalent to 387,000 fewer workers, compared to the previous year.

Angara believes that the lack of support services from the government to farmers has led to the poor state of agriculture in the country, which makes the industry unappealing to pursue as a career.

The PSA said the agriculture sector currently employs 9.158 million individuals. The average daily wage of agriculture workers is P265, according to a study by the Philippine Institute for Development Studies or PIDS.

Meanwhile, government records show that the agriculture’s relative contribution to gross domestic product (GDP) had been declining over the years.

Angara: Pilot implementation of face-to-face classes needed before resumption nationwide
Immunization of the population expected to begin with the approval of the COVID-19 vaccination program bill-- Angara
Angara seeks exemption to donor’s tax for donations of COVID-19 vaccines and critical supplies
Angara: Growing number of out of school youth is a cause of concern
Angara: Ecommerce will help ensure the survival of MSMEs and boost economic growth
Angara bill seeks to assist LGUs in shifting to digital
2021 judiciary budget will ensure implementation of the Judges-at-Large Act and the judiciary marshal service – Angara
STATEMENT OF SEN SONNY ANGARA
ANGARA: PGH AND EAST AVENUE MEDICAL CENTER RECEIVE ADDITIONAL FUNDING UNDER THE 2021 GAA TO SERVE MORE FILIPINOS IN NEED OF MEDICAL ATTENTION
PCMC receives additional support under the 2021 GAA to provide even better services for children in need of medical attention-- Angara
Statement of Sen. Sonny Angara on the signing of the 2021 GAA
Christmas message of Sen. Sonny Angara
Angara: Displaced workers will continue to receive assistance under the 2021 budget
Improved internet services even in far flung areas expected with the increase in the budget for the National Broadband Program-- Angara
Angara-- New and unfunded laws will receive funding under the 2021 GAA
Improved health responses needed to boost consumer confidence and spur economic growth -- Angara
Angara wants more public hospitals and medical professionals to ensure all Filipinos are provided with quality health care
Angara wants public libraries to provide essential services to learners under the new normal
Statement of Sen. Sonny Angara on the transmittal of the 2021 GAB by the House of Representatives
Angara bats for the naturalization of Angelo Kouame
END_OF_DOCUMENT_TOKEN_TO_BE_REPLACED