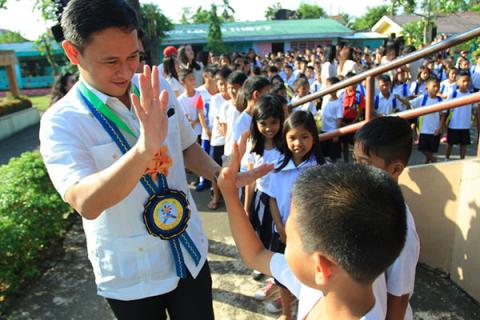 Reelectionist Senator Sonny Angara has called for a more aggressive immunization campaign to ensure that life-saving vaccines reach as many Filipino children as possible.

“We need to be more aggressive in ensuring that every Filipino child receives vaccines to protect them against preventable illnesses. We have to make sure that our immunization program reaches even the hardest to reach child,” Angara said.

The senator issued the statement after the United Nations Children Fund (UNICEF) reported that an estimated 2.9 million children in the Philippines remained unvaccinated, making them vulnerable to potentially deadly infections like measles, rubella and polio.

The UN agency cited public hesitancy, vaccine stock-outs, lack of properly trained health workers and accessibility of hard-to-reach areas as the main reasons why many Filipino children have failed to get immunization.

According to Angara, the government needs to step up its information campaign on the benefits of vaccination program, which should include the use of door-to-door approach in far-flung areas to provide parents with personalized immunization information.

“It is vital to identify those who are missing vaccination and reach them with life-saving vaccines,” said the lawmaker from Aurora, who is running under the platform “Alagang Angara.”

“Improving vaccination coverage is the key to reducing diseases and deaths among children,” he added.

Close to 30,000 measles cases, including 389 deaths, were recorded nationwide since January this year.

Angara has been pushing parents to have their children vaccinated, saying that immunization is the best protection against measles—a highly contagious disease that can cause life-threatening pneumonia and brain inflammation, middle-ear infection, severe diarrhea, and sometimes death.

“Measles can be prevented with a safe and effective vaccine,” said Angara, a health advocate in the Senate who aggressively pushed for the passage of the Cancer Control Act, Mental Health Act, and the Universal Health Care Act in which he pushed for the inclusion of free checkup, laboratory test and medicine.

The vaccine is given as part of a combination vaccine called the MMR, which protects against measles, mumps and rubella.

Doctors advise parents to have their babies aged 6 to 11 vaccinated for the first shot and a follow-up vaccine shot when they reach 12 to 18 months.

Aside from measles, the country’s mandatory basic immunization covers tuberculosis, polio, hepatitis B, type B influenza, diphtheria, tetanus and pertussis.

Immunization of the population expected to begin with the approval of the COVID-19 vaccination program bill-- Angara
Angara seeks exemption to donor’s tax for donations of COVID-19 vaccines and critical supplies
Angara: Growing number of out of school youth is a cause of concern
Angara: Ecommerce will help ensure the survival of MSMEs and boost economic growth
Angara bill seeks to assist LGUs in shifting to digital
2021 judiciary budget will ensure implementation of the Judges-at-Large Act and the judiciary marshal service – Angara
STATEMENT OF SEN SONNY ANGARA
ANGARA: PGH AND EAST AVENUE MEDICAL CENTER RECEIVE ADDITIONAL FUNDING UNDER THE 2021 GAA TO SERVE MORE FILIPINOS IN NEED OF MEDICAL ATTENTION
PCMC receives additional support under the 2021 GAA to provide even better services for children in need of medical attention-- Angara
Statement of Sen. Sonny Angara on the signing of the 2021 GAA
Christmas message of Sen. Sonny Angara
Angara: Displaced workers will continue to receive assistance under the 2021 budget
Improved internet services even in far flung areas expected with the increase in the budget for the National Broadband Program-- Angara
Angara-- New and unfunded laws will receive funding under the 2021 GAA
Improved health responses needed to boost consumer confidence and spur economic growth -- Angara
Angara wants more public hospitals and medical professionals to ensure all Filipinos are provided with quality health care
Angara wants public libraries to provide essential services to learners under the new normal
Statement of Sen. Sonny Angara on the transmittal of the 2021 GAB by the House of Representatives
Angara bats for the naturalization of Angelo Kouame
Angara pushes for survivorship benefits for members of the National Prosecution Service
END_OF_DOCUMENT_TOKEN_TO_BE_REPLACED