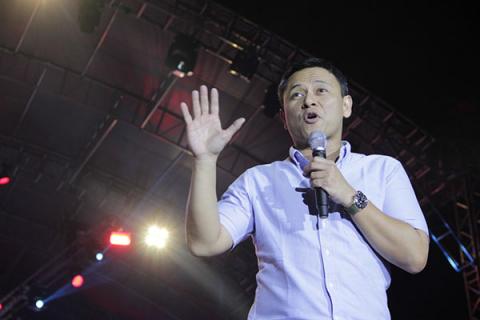 Reelectionist Senator Sonny Angara is confident the Philippines will be in a better position to sustain its high economic growth after college education and health care have been made more accessible to Filipinos through the Free College Education Law and the Universal Health Care (UHC) Act.

Angara said these two important pieces of legislation he co-authored and co-sponsored will help boost the country’s human capital, which is a key driver to economic growth.

“By making college education free and giving Filipinos equitable access to affordable and quality health care, we are investing in building human capital which is a key factor that can sustain the high growth rate the country has been experiencing in recent years,” Angara said.

According to him, people with access to education and health care have better chances of getting well-paid jobs and becoming more productive.

“Consider now that we have made college free for all Filipinos. I can guarantee that there will be a palpable change, shift or transformation in our society in the coming generations,” said the lawmaker from Aurora, who is running under the platform “Alagang Angara.”

Angara, who strongly believes that education is the great socioeconomic equalizer and a stepping stone to something higher and brighter, said that finishing college means being able to pursue employment opportunities that are unavailable to those without a college degree.

“College education could ensure that all children of any class have a shot at success,” the Harvard-educated lawmaker said.

Meanwhile, Angara said that investing in the health system does not only save lives, but also a crucial investment in wider economy.

This is because ill-health impairs productivity, hinders job prospects and adversely affects human capital development, he pointed out.

“An education would be for naught, however, if a person is unwell and sickly. And that’s why we also focus on health care, specifically on making it more affordable and more accessible to many more Filipinos,” Angara said.

As one of the authors of the UHC law, Angara pushed for the inclusion of free checkup, laboratory tests and some medicines in the coverage of PhilHealth.

“It used to be that one sick family member would set an entire family back tremendously,” Angara pointed out.

This year, the government will get to spend P46 billion to implement the country’s Free College Education Law, making it the biggest budget for free college education in Philippine history.

Aside from free tuition, Angara said allowance and other financial assistance will be provided to poor students to enable them to finish their studies.

The UHC law, which was signed by President Duterte in February, automatically enrolls all Filipinos to the National Health Security Program that replaced the National Health Insurance Program managed by PhilHealth. It received P18-billion funding under the 2019 spending package of the government.

Angara: Pilot implementation of face-to-face classes needed before resumption nationwide
Immunization of the population expected to begin with the approval of the COVID-19 vaccination program bill-- Angara
Angara seeks exemption to donor’s tax for donations of COVID-19 vaccines and critical supplies
Angara: Growing number of out of school youth is a cause of concern
Angara: Ecommerce will help ensure the survival of MSMEs and boost economic growth
Angara bill seeks to assist LGUs in shifting to digital
2021 judiciary budget will ensure implementation of the Judges-at-Large Act and the judiciary marshal service – Angara
STATEMENT OF SEN SONNY ANGARA
ANGARA: PGH AND EAST AVENUE MEDICAL CENTER RECEIVE ADDITIONAL FUNDING UNDER THE 2021 GAA TO SERVE MORE FILIPINOS IN NEED OF MEDICAL ATTENTION
PCMC receives additional support under the 2021 GAA to provide even better services for children in need of medical attention-- Angara
Statement of Sen. Sonny Angara on the signing of the 2021 GAA
Christmas message of Sen. Sonny Angara
Angara: Displaced workers will continue to receive assistance under the 2021 budget
Improved internet services even in far flung areas expected with the increase in the budget for the National Broadband Program-- Angara
Angara-- New and unfunded laws will receive funding under the 2021 GAA
Improved health responses needed to boost consumer confidence and spur economic growth -- Angara
Angara wants more public hospitals and medical professionals to ensure all Filipinos are provided with quality health care
Angara wants public libraries to provide essential services to learners under the new normal
Statement of Sen. Sonny Angara on the transmittal of the 2021 GAB by the House of Representatives
Angara bats for the naturalization of Angelo Kouame
END_OF_DOCUMENT_TOKEN_TO_BE_REPLACED