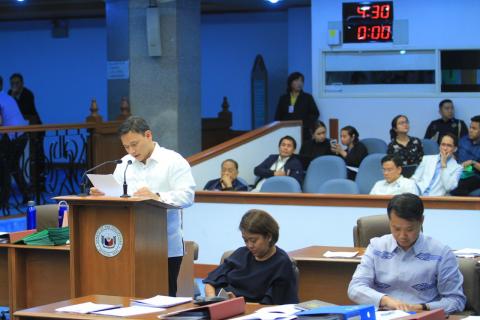 Senator Sonny Angara on Monday endorsed to the Senate plenary a bill increasing the excise tax on tobacco products in a bid to reduce smoking prevalence among Filipinos and raise crucial funding for the government’s Universal Health Care (UHC) program.

This developed as the Senate Committee on Ways and Means, which Angara chairs, adopted a committee report on the consolidated measure that will raise the excise tax for every cigarette pack from P35 to P60 for the next four years.

The committee report proposes a starting rate of P45 in 2020 or an increase of P10 in the first year of implementation, followed by a series of annual P5 increases until the rate reaches P60 in 2023. Thereafter, the rate automatically increases by 5 percent.

In resorting to gradual tax increase instead of an immediate P25 bump to the current rate, Angara said the committee did a delicate balancing act in considering a measure that will reconcile the competing interests of the government, health advocates, the cigarette industry and tobacco farmers.

Angara said that committee members consider tobacco tax hike bill as an important legislation that would not only help reduce deaths and disabilities due to smoking, but also generate the much-needed revenues for the UHC program.

At the same time, Angara said they could not ignore the impact of raising the excise tax on tobacco farmers, whose families are also dependent on the industry.

“We’re legislating not so much a single sweet spot, but a ladder where we hope all stakeholders involved can make a smooth transition,” Angara said.

“In essence, we’re providing up to four years of graduated increases so that more of our tobacco farmers can shift crops; the tobacco companies can recast their financial projections; and the DOH (Department of Health) can catch up with its underspending,” he added.

President Duterte had certified as urgent Pacquiao’s proposal—Senate Bill 1599–raising the current unitary excise tax rate to P60 per pack with a yearly increase of 9 percent.

The Department of Finance said the measure will help fill in the P40 billion funding gap for the UHC.

According to the DOH, 85 percent of the proceeds from the excise tax is used to finance government health programs—80 percent for the UHC and 20 percent for improvement of facilities in government hospitals.

The remaining 15 percent of the proceeds goes to livelihood programs and financial assistance to tobacco farmers, the DOH said.

Anti-smoking and health advocates have been pushing for much higher excise tax to curb the prevalence of smoking and significantly reduce tobacco-related deaths in the country.

They said the smoking prevalence in the Philippines remains relatively high at 23 percent compared to other countries with successful tobacco control initiatives.

Angara said that two considerations have to be made by his committee in adopting a staggered approach to the new tobacco tax rates—the livelihood of tobacco farmers and the spending capacity of the DOH.

Angara warned that higher excise taxes would imperil the livelihood of more tobacco farmers who have already sustained significant losses in recent years on account of the additional taxes.

“More time is needed for them to transition to non-tobacco crops like rice, corn and high-balue vegetables,” he pointed out.

Citing 2017-2018 data from the National Tobacco Administration, Angara said that less than 14 percent of tobacco farmers have actually shifted away from tobacco to other crops like corn, rice, watermelon, garlic, onions or high-value vegetables—corresponding to only 10.5 percent of the country’s total hectarage devoted to tobacco growing.

Angara, meanwhile, noted the low absorptive capacity of the DOH’s Health Facilities Enhancement Program (HFEP), which is a key component of the UHC law.

Last year, a compromise between the Department of Budget and Management had to be struck about the latter’s 2019 HFEP budget because it was initially slashed from P30 billion to only P50 million on account of poor obligation and disbursement rates—apparently only 30 percent (P9.2 billion) and 6.8 percent (P2.44 billion) respectively.

Angara: Pilot implementation of face-to-face classes needed before resumption nationwide
Immunization of the population expected to begin with the approval of the COVID-19 vaccination program bill-- Angara
Angara seeks exemption to donor’s tax for donations of COVID-19 vaccines and critical supplies
Angara: Growing number of out of school youth is a cause of concern
Angara: Ecommerce will help ensure the survival of MSMEs and boost economic growth
Angara bill seeks to assist LGUs in shifting to digital
2021 judiciary budget will ensure implementation of the Judges-at-Large Act and the judiciary marshal service – Angara
STATEMENT OF SEN SONNY ANGARA
ANGARA: PGH AND EAST AVENUE MEDICAL CENTER RECEIVE ADDITIONAL FUNDING UNDER THE 2021 GAA TO SERVE MORE FILIPINOS IN NEED OF MEDICAL ATTENTION
PCMC receives additional support under the 2021 GAA to provide even better services for children in need of medical attention-- Angara
Statement of Sen. Sonny Angara on the signing of the 2021 GAA
Christmas message of Sen. Sonny Angara
Angara: Displaced workers will continue to receive assistance under the 2021 budget
Improved internet services even in far flung areas expected with the increase in the budget for the National Broadband Program-- Angara
Angara-- New and unfunded laws will receive funding under the 2021 GAA
Improved health responses needed to boost consumer confidence and spur economic growth -- Angara
Angara wants more public hospitals and medical professionals to ensure all Filipinos are provided with quality health care
Angara wants public libraries to provide essential services to learners under the new normal
Statement of Sen. Sonny Angara on the transmittal of the 2021 GAB by the House of Representatives
Angara bats for the naturalization of Angelo Kouame
END_OF_DOCUMENT_TOKEN_TO_BE_REPLACED