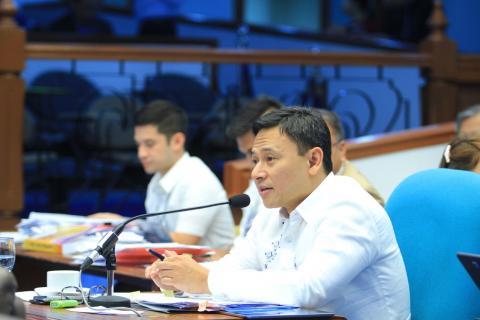 Angara, who has prepared a raft of bills he will pursue, said “policymaking has always been a two-way street, with bills emanating from both the executive branch and the legislature, and these branches improving on each other’s proposals.”

“Hindi rin importante kung galing ang proposal sa majority or sa minority. Authorship is secondary. What we should be looking for are the merits, especially on measures of the non-political kind. Monopoly of ideas leads to bad legislation,” Angara said.

Once a common legislative-executive agenda is forged, what can be rolled out are the non-contentious ones, Angara said. “Let’s begin with the easy ones, the so-called low-hanging fruits, while we subject complicated measures to more study, debate and improvement.”

Angara said that while he will have “a bill for every sector,” he will concentrate on measures that will be boost social protection, improve access to and quality of education, better health care, guarantee food security, and create economic and job opportunities .

“Some of these are legacy measures, a continuation of what my father initiated in his four terms in the Senate. Ito yung mga Alagang Angara laws, “ he said.

Among the first bills Angara will file tomorrow is the upgrading of the Salary Grade of public school teachers from 11 to 19, “which jibes with what the President has promised our teachers.”

“We have increased the pay of our soldiers and policemen. It is time to do the same to our public teaching corps who are fighting the war against illiteracy, “ he said.

Another bill Angara will file grants discounts on books, health care, school supplies, and some school fees to poor students in all school levels, including those in technical-vocational institutions.

Angara will also push for the doubling of the social pension of destitute senior citizens from P6,000 to P12,000 a year.

“It is time to amend the Expanded Senior Citizens Act to attune it to the needs of the elderly, for the benefits to be truly responsive to the plight of seniors lacking financial and familial support,” Angara said.

At least two Magna Cartas will be filed by Angara, one for Filipino seafarers, and the other for barangay workers

“The lack of support for our sea-based workers cannot be dismissed as a ‘minor maritime incident.’ It is a big problem that must be addressed, more so that money sent home by Filipinos who sail the seas and man the ships of the world is what helps keep our economy afloat ,“ Angara said.

The proposed Magna Carta for Barangays, on the other hand, will “rationalize and regularize” the salaries, allowances, insurance, medical and dental coverage, and retirement benefits of “our frontline workers.”

Aside from these bills, Angara will also file resolutions seeking probes into recent reported anomalies in government offices.

One of these is the ‘ghost’ dialysis payments made by the Philippine Health Insurance Corporation. “At a time when we are looking for ways to fund the Universal Health Care Law, we cannot allow leakages to continue. Whatever funds we infuse might be lost to the money hemorrhage caused by scams.”
-30-

Angara: Pilot implementation of face-to-face classes needed before resumption nationwide
Immunization of the population expected to begin with the approval of the COVID-19 vaccination program bill-- Angara
Angara seeks exemption to donor’s tax for donations of COVID-19 vaccines and critical supplies
Angara: Growing number of out of school youth is a cause of concern
Angara: Ecommerce will help ensure the survival of MSMEs and boost economic growth
Angara bill seeks to assist LGUs in shifting to digital
2021 judiciary budget will ensure implementation of the Judges-at-Large Act and the judiciary marshal service – Angara
STATEMENT OF SEN SONNY ANGARA
ANGARA: PGH AND EAST AVENUE MEDICAL CENTER RECEIVE ADDITIONAL FUNDING UNDER THE 2021 GAA TO SERVE MORE FILIPINOS IN NEED OF MEDICAL ATTENTION
PCMC receives additional support under the 2021 GAA to provide even better services for children in need of medical attention-- Angara
Statement of Sen. Sonny Angara on the signing of the 2021 GAA
Christmas message of Sen. Sonny Angara
Angara: Displaced workers will continue to receive assistance under the 2021 budget
Improved internet services even in far flung areas expected with the increase in the budget for the National Broadband Program-- Angara
Angara-- New and unfunded laws will receive funding under the 2021 GAA
Improved health responses needed to boost consumer confidence and spur economic growth -- Angara
Angara wants more public hospitals and medical professionals to ensure all Filipinos are provided with quality health care
Angara wants public libraries to provide essential services to learners under the new normal
Statement of Sen. Sonny Angara on the transmittal of the 2021 GAB by the House of Representatives
Angara bats for the naturalization of Angelo Kouame
END_OF_DOCUMENT_TOKEN_TO_BE_REPLACED