Senator Sonny Angara on the death of Gina Lopez 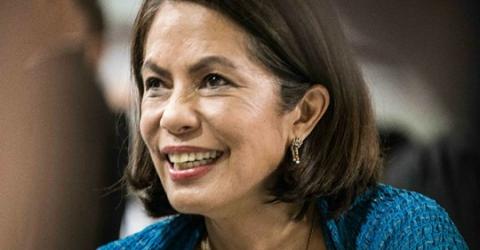 By her selfless works, Gina’s work was the confirmed environment secretary of the people,  the minister for sustainable development, and the ambassador for children’s rights.

She spent a lifetime pouring her considerable talents in bringing to the mainstream the powerless and the voiceless who exist forgotten in the  margins of society.

She fought for children who were incapable of seeking justice and care  for themselves and eloquently spoke for the people in the communities  whose voices have been crushed by exploitation.

She even took it upon herself to represent a constituency that cannot vote – trees, fish, rivers and wildlife –  because she correctly believed that  our continued existence and that of our children is dependent on theirs.

Gina did not preach what she did not practice. She was not a Powerpoint crusader but a living example of how to live a life that will not bankrupt  earth’s resources to support us.

She was a one-person green warrior who took the fight to where it matters – in boardrooms,  chatrooms,  government offices, and in her favorite office – out in the open, under a forest canopy or underwater, where she was in her element with people she loved in a country she never gave up hope on.

In the last years of her life, she produced  a travelogue, of the sublime kind, because it did not only transport us to the beautiful places in our country, but gave us a lesson on the importance of protecting these.

Angara: Benefits for health workers to continue even after Bayanihan 2 expiration on June 30
EASTER SUNDAY MESSAGE OF SEN. SONNY ANGARA
Statement of Sen. Angara on the procurement of vaccines by the private sector
SK reform bill hurdles committee level-- Angara
Angara: Kouame an asset to Philippine basketball
Angara pushes for 100% increase in PDIC deposit insurance coverage
Angara: Pilot implementation of face-to-face classes needed before resumption nationwide
Immunization of the population expected to begin with the approval of the COVID-19 vaccination program bill-- Angara
Angara seeks exemption to donor’s tax for donations of COVID-19 vaccines and critical supplies
Angara: Growing number of out of school youth is a cause of concern
Angara: Ecommerce will help ensure the survival of MSMEs and boost economic growth
Angara bill seeks to assist LGUs in shifting to digital
2021 judiciary budget will ensure implementation of the Judges-at-Large Act and the judiciary marshal service – Angara
STATEMENT OF SEN SONNY ANGARA
ANGARA: PGH AND EAST AVENUE MEDICAL CENTER RECEIVE ADDITIONAL FUNDING UNDER THE 2021 GAA TO SERVE MORE FILIPINOS IN NEED OF MEDICAL ATTENTION
PCMC receives additional support under the 2021 GAA to provide even better services for children in need of medical attention-- Angara
Statement of Sen. Sonny Angara on the signing of the 2021 GAA
Christmas message of Sen. Sonny Angara
Angara: Displaced workers will continue to receive assistance under the 2021 budget
Improved internet services even in far flung areas expected with the increase in the budget for the National Broadband Program-- Angara
END_OF_DOCUMENT_TOKEN_TO_BE_REPLACED