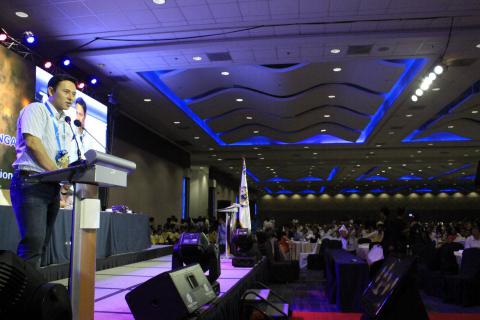 Senator Sonny Angara is pushing for wide-ranging reforms to improve the services and facilities in all barangays across the country, as well as make barangay officials regular state employees entitled to fixed salaries and benefits.

Angara, chair of the Committee on Local Government, said Senate Bill 2097, or the proposed Magna Carta for Barangays, he filed in the Senate would help barangays perform their mandate of delivering basic services in the “most efficient, responsive and sustainable manner.”

According to Angara, more than 42,000 barangays, including the new barangays created by 17 laws earlier deliberated on and passed by his committee, stand to benefit from the bill.

He said the Senate local government panel had enabled these barangays to receive additional funding from the government to serve their citizens.

To promote the welfare of the barangays, Angara said, the proposed Magna Carta for Barangays aims to provide communities with appropriate basic services and facilities such as regular supply of clean and potable water, public transportation, schools, health centers and barangay halls in order to meet the requirements of their local populace.

Under the measure, every city or municipality is required to construct and maintain at least one deep well to supply the drinking water needs of every 1,000 residents for each barangay.

Each city or municipality is also tasked to make necessary representations before national government agencies to require public utility companies operating within its jurisdiction to provide minimum means of transportation in every barangay.

The bill entitles every barangay to one elementary school and one high school for every five kilometers from the barangay center, as well as one barangay health center.

At the same time, Angara’s bill seeks to make barangay officials as regular state employees who are entitled to fixed salaries and benefits in recognition of the crucial role as frontliners of government service.

Under the Local Government Code (LGC), barangay officials should only receive honorariums, and not salaries. At present, a barangay chairman gets an honorarium of at least P1,000 per month while the councilors, treasurer and secretary each receive P600 monthly.

In the bill that he filed, Angara proposed that the punongbarangay receive an amount equivalent to the salary of a Sangguniang Bayan or Sangguniang Panlunsod member of his municipality or city.

He also wants each of the six barangay kagawad be given an amount equivalent to 80 percent of the city or municipal council member’s salary, while the kabataang barangay chair and barangay secretary and treasurer, equivalent to 75 percent.

In order to achieve all these, Angara said barangays should be given local autonomy through automatic release of their share from the Internal Revenue Allotment or IRA and mandatory share in taxes, fees and other charges.

He said that 25 percent of all taxes collected on real property within the barangay should be considered as barangay funds.

Each barangay, he said, should be entitled to 10 percent from all other forms of taxes, fees, penalties, compromises or other charges collected from persons residing in the barangay or entities whose office or manufacturing plant is located within the barangay. #

ANGARA: PGH AND EAST AVENUE MEDICAL CENTER RECEIVE ADDITIONAL FUNDING UNDER THE 2021 GAA TO SERVE MORE FILIPINOS IN NEED OF MEDICAL ATTENTION
PCMC receives additional support under the 2021 GAA to provide even better services for children in need of medical attention-- Angara
Statement of Sen. Sonny Angara on the signing of the 2021 GAA
Christmas message of Sen. Sonny Angara
Angara: Displaced workers will continue to receive assistance under the 2021 budget
Improved internet services even in far flung areas expected with the increase in the budget for the National Broadband Program-- Angara
Angara-- New and unfunded laws will receive funding under the 2021 GAA
Improved health responses needed to boost consumer confidence and spur economic growth -- Angara
Angara wants more public hospitals and medical professionals to ensure all Filipinos are provided with quality health care
Angara wants public libraries to provide essential services to learners under the new normal
Statement of Sen. Sonny Angara on the transmittal of the 2021 GAB by the House of Representatives
Angara bats for the naturalization of Angelo Kouame
Angara pushes for survivorship benefits for members of the National Prosecution Service
The President's report on the implementation of the Bayanihan 2
Angara calls for extension of waiver on fees for digital transactions of banks and mobile payment services
Angara to Comelec: Work on making it easier for seniors and PWDs to vote during elections
Angara: There should be no delays in the implementation of Bayanihan 2
Angara says 2022 deadline for registration of 90 million Filipinos to PhilSys ID should be achieved without delay
Angara to CHEd and SUCs: Let’s work together in keeping Filipino graduates in the Philippines
Statement of Sen. Sonny Angara  (law sponsor) on the enactment of Bayanihan 2
END_OF_DOCUMENT_TOKEN_TO_BE_REPLACED