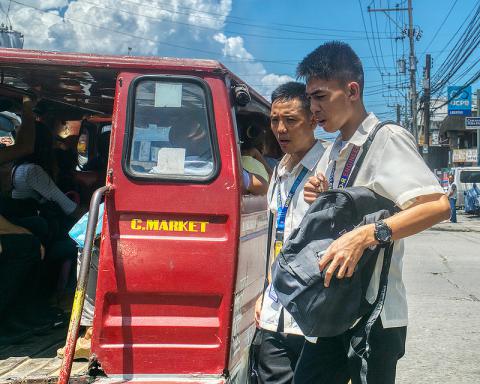 Senator Sonny Angara has urged the House of Representatives to immediately pass its version of the bill institutionalizing the grant of 20-percent fare discount to students to ensure they will continue to enjoy reduced transportation expenses in the future.

The Senate has approved its own version of the measure as early as October last year, while the counterpart bill in the House remains at the committee level. Although the bill has already been approved by the House transportation and ways and means committees, it has yet to be sponsored on the floor.

“We are urging our honorable congressmen to pass the House version so that we can come up with the final bill that will be sent to Malacañang for President Duterte’s signature,” Angara said.

Last October, the Senate plenary approved on third and final reading Angara’s Senate Bill 1597 which seeks to institutionalize the grant of fare discount currently being enforced by the Land Transportation Franchising and Regulatory Board (LTFRB) even during weekends and holidays and which covers all means of transportation all-year round.

The LTFRB, in October 2017, issued a memorandum circular stating that “students can avail of the 20-percent discount from Monday to Sunday, including summer breaks, legal and special holidays.”

Failure to provide the fare discount is a franchise violation that carries a penalty of a fine of P5,000 for the first offense, P10,000 and their vehicles impounded for one month for the second offense, and P15,000 and cancellation of franchise for the third offense.

According to Angara, there is always a possibility that the student fare discount may not be enforced effectively since it is just based on a mere circular issued by the LTFRB.

Once Angara’s bill is enacted into law, all Filipino students—from elementary to college, as well as those enrolled in technical-vocational schools—would be entitled to a 20-percent discount in buses, jeepneys, taxis, tricycle, transport network vehicle services or TNVS, MRT, LRT, as well as airline and passenger ships.

Students may avail of the 20-percent discount on regular fares not only during school days and summer classes, but also on Saturday and Sunday, Christmas break, Lenten break, semestral break and school summer vacation.

Angara said the measure would somehow lessen the hardship of parents in sending their children to school as it would cut down their transportation expenses.

“A few pesos or centavos saved from the fare discount can be used for other school requirements,” the lawmaker pointed out.

He added: “We always say that the youth is the future of the country. Let’s make this come true by investing adequately on our students.” #

Statement of Senator Sonny Angara
INCOMING DBM SECRETARY NI PBBM, HIGHLY-QUALIFED, MAY MAIPAGMAMALAKING TRACK-RECORD -- ANGARA
Statement of Sen. Sonny Angara on the Appointment of Amenah Pangandaman as DBM Secretary
PDIC charter amendments for a stronger and more resilient banking system—Angara
Kaugnay sa muling paglobo ng COVID cases sa bansa: “MAGPABAKUNA, SUMUNOD SA HEALTH PROTOCOLS AT PATULOY NA PAG-INGATAN ANG KALUSUGAN” - ANGARA
Statement of Committee on Finance Chairman, Sen. Sonny Angara on the signing of the 2022 GAA
Angara reminds PhilHealth of their obligations to the public
Threat of Omicron highlights need to improve biosurveillance and genome sequencing capabilities—Angara
Angara: Don’t let vaccines go to waste-- Allow booster shots for private sector workers
SEN. ANGARA ON THE THREAT OF HOSPITALS TO WITHDRAW FROM PHILHEALTH SYSTEM BECAUSE OF DELAYED REIMBURSMENTS OF CLAIMS:
Angara: Decline in COVID cases should not result in complacency
Angara: Go the extra mile to vaccinate our senior citizens
Angara to DOLE: Targeted interventions needed to ensure no one is left behind
It’s about time to rebuild the homes of the people of Marawi—Angara
Angara: Benefits for health workers should continue while the COVID pandemic is in place
Angara urges youth impacted by COVID to avail of jobs under the Expanded SPES Law
Angara: The national budget must be able to keep pace with COVID-19
Angara hopes to finally see the passage of the Magna Carta of Filipino Seafarers
Angara: Move towards digital payments welcome to all sectors
Angara tells DOH to speed up hiring of doctors and nurses for public hospitals
END_OF_DOCUMENT_TOKEN_TO_BE_REPLACED