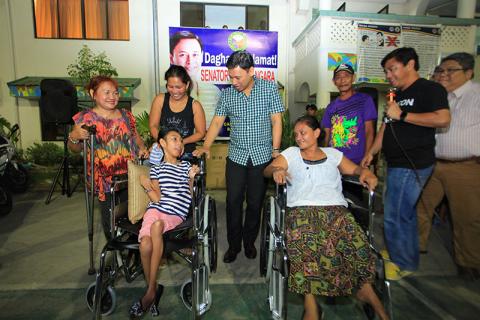 Reelectionist Senator Sonny Angara is calling on state institutions and the private sector to hire more qualified persons with disability (PWDs) amid continued disparities in their employment situation.

Angara reminded that Republic Act 10524 or An Act Expanding the Positions Reserved for PWDs requires government offices to reserve at least one percent of their total positions to PWDs. Under the law, corporations with more than 100 employees are encouraged to do the same.

Passed in 2013, RA 10524 amended RA 7277 or the Magna Carta for PWDs, which grants additional privileges, incentives and prohibitions on verbal, non-verbal ridicule and vilification against PWDs.

However, Angara lamented that gaps and disparities in the job situation of PWDs still remain, as 2017 data from the National Council on Disability Affairs (NCDA) showed that there were a little over 7,000 PWDs employed by government.

“More than five years since the enactment of the law, it shows that much work remains to be done in order to narrow the considerable gaps that still exist,” said the lawmaker, who is running under the platform “Alagang Angara.”

Government statistics show that there are more than 2.42 million state workers as of 2017.

Angara, however, stressed that PWDs should not be denied access to opportunities for suitable employment.

“They have the right to be employed in the same way as able-bodied people are, as long as they can perform the job,” he pointed out.

An online inventory conducted by the NCDA showed that the entire government bureaucracy employed only a total of 7,250 PWDs, 3,973 of them are male and 3,277 are female as of August 31, 2017.

“These figures are alarming because there seems to be a clear violation of the law which mandates government offices to have not less than one percent of their workforce comprising PWDs,” Angara said.

“If there were 2.42 million government workers in 2017, only 0.2 percent of them are PWDs, falling behind the one percent requirement,” Angara lamented.

Meanwhile, there is no available government data on the number of PWDs employed in the private sector.

Angara said that laws, such as RA 10524, RA 7277 and the Accessibility Law which requires certain establishments and public utilities to install facilities that would enhance the mobility of PWDs, aimed to remove barriers to their full inclusion and participation in the society.

“These laws must be strictly implemented in order to ensure that PWDs have the same opportunity to access and benefit certain services in a similar way as others. We should treat PWDs in a way that respects their dignity and independence,” Angara said.

Under RA 7277, PWDs are entitled to 20 percent discount for the purchase of medicines in all drugstores, medical and dental services, including diagnostic and laboratory fees, and professional fees of attending doctors.

They can also avail of the discount in establishments like hotels and restaurants, admission fees on theaters and movie houses, and on transportation fare for domestic land, air and sea travel.

This law was authored by Angara’s father, the late Senate President Edgardo Angara, who was also responsible for the senior citizens discount.

Such discount was expanded by the younger Angara by sponsoring RA 10754 in 2016 which granted the 12-percent value-added tax exemption to PWDs.

Angara: Benefits for health workers to continue even after Bayanihan 2 expiration on June 30
EASTER SUNDAY MESSAGE OF SEN. SONNY ANGARA
Statement of Sen. Angara on the procurement of vaccines by the private sector
SK reform bill hurdles committee level-- Angara
Angara: Kouame an asset to Philippine basketball
Angara pushes for 100% increase in PDIC deposit insurance coverage
Angara: Pilot implementation of face-to-face classes needed before resumption nationwide
Immunization of the population expected to begin with the approval of the COVID-19 vaccination program bill-- Angara
Angara seeks exemption to donor’s tax for donations of COVID-19 vaccines and critical supplies
Angara: Growing number of out of school youth is a cause of concern
Angara: Ecommerce will help ensure the survival of MSMEs and boost economic growth
Angara bill seeks to assist LGUs in shifting to digital
2021 judiciary budget will ensure implementation of the Judges-at-Large Act and the judiciary marshal service – Angara
STATEMENT OF SEN SONNY ANGARA
ANGARA: PGH AND EAST AVENUE MEDICAL CENTER RECEIVE ADDITIONAL FUNDING UNDER THE 2021 GAA TO SERVE MORE FILIPINOS IN NEED OF MEDICAL ATTENTION
PCMC receives additional support under the 2021 GAA to provide even better services for children in need of medical attention-- Angara
Statement of Sen. Sonny Angara on the signing of the 2021 GAA
Christmas message of Sen. Sonny Angara
Angara: Displaced workers will continue to receive assistance under the 2021 budget
Improved internet services even in far flung areas expected with the increase in the budget for the National Broadband Program-- Angara
END_OF_DOCUMENT_TOKEN_TO_BE_REPLACED