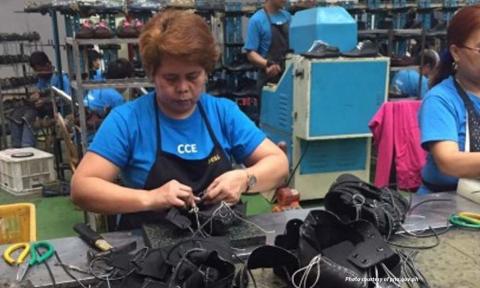 The “shoe-tech” school being put up by the local government of Marikina City for those who want to go into the shoemaking business is a Tatak Pinoy model that other parts of the country can follow, Senator Sonny Angara said.

“We need more of these Tatak Pinoy initiatives to highlight the best of what a LGU has to offer. In the case of Marikina City, its expertise in making quality footwear is known by all. This is something that should be sustained and promoted further to ensure its continued growth, both domestically and internationally,” Angara said.

“Through this shoemaking institute of Mayor Marcy Teodoro, we will have more Tatak Pinoy artisans crafting quality footwear for Filipino patrons such as President Duterte and for the discerning foreign nationals who seek out the Made in Marikina seal to add to their collection,” he added.

Most of the players in the local footwear industry are classified as micro and small enterprises. Growth of the industry has been steady though, with the Philippine Statistics Authority reporting an average annual growth rate of 10.35 percent.

Marikina was synonymous to quality footwear back in the day but the influx of cheap imports forced many of the cobblers in the city to close shop.

With this effort of the LGU to revive the industry and with the right kind of support, Angara said the future looks bright for Marikina shoes.

Angara wants to help set in motion an all-out Tatak Pinoy (Made in the Philippines) campaign as a way to improve the country’s economic productivity and competitiveness, generate more decent jobs for Filipinos, particularly those in the countryside, and eradicate chronic poverty and inequality in the country.

At the start of the 18th Congress, Angara filed Senate Resolution No. 4 to look into the formulation and sustained implementation of a Tatak Pinoy industrialization campaign and policy.

For some regions, they have very good products to offer, but could need some help in innovation and marketing to take off.

Angara explained that the first step is for all regional development councils, headed by the governors and mayors, to identify the products and services of their provinces and cities so that an assessment could be made on how to improve them, if necessary, and promote them on a wider scale.

“We could also come up with workshops on furniture making for our future Cobonpues or maybe come up with a distinct Philippine brand of artisan coffee that will be sought out by connoisseurs around the world,” Angara said.

Angara: Benefits for health workers to continue even after Bayanihan 2 expiration on June 30
EASTER SUNDAY MESSAGE OF SEN. SONNY ANGARA
Statement of Sen. Angara on the procurement of vaccines by the private sector
SK reform bill hurdles committee level-- Angara
Angara: Kouame an asset to Philippine basketball
Angara pushes for 100% increase in PDIC deposit insurance coverage
Angara: Pilot implementation of face-to-face classes needed before resumption nationwide
Immunization of the population expected to begin with the approval of the COVID-19 vaccination program bill-- Angara
Angara seeks exemption to donor’s tax for donations of COVID-19 vaccines and critical supplies
Angara: Growing number of out of school youth is a cause of concern
Angara: Ecommerce will help ensure the survival of MSMEs and boost economic growth
Angara bill seeks to assist LGUs in shifting to digital
2021 judiciary budget will ensure implementation of the Judges-at-Large Act and the judiciary marshal service – Angara
STATEMENT OF SEN SONNY ANGARA
ANGARA: PGH AND EAST AVENUE MEDICAL CENTER RECEIVE ADDITIONAL FUNDING UNDER THE 2021 GAA TO SERVE MORE FILIPINOS IN NEED OF MEDICAL ATTENTION
PCMC receives additional support under the 2021 GAA to provide even better services for children in need of medical attention-- Angara
Statement of Sen. Sonny Angara on the signing of the 2021 GAA
Christmas message of Sen. Sonny Angara
Angara: Displaced workers will continue to receive assistance under the 2021 budget
Improved internet services even in far flung areas expected with the increase in the budget for the National Broadband Program-- Angara
END_OF_DOCUMENT_TOKEN_TO_BE_REPLACED