Angara pushes for further reforms to the SK system 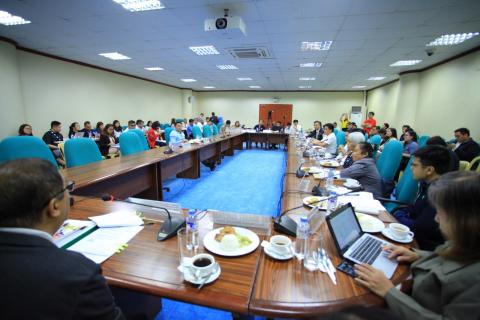 In order to further strengthen the Sangguniang Kabataan (SK) system and encourage more individuals to join this local youth institution, Senator Sonny Angara is seeking to introduce new amendments to Republic Act 10742 or the SK Reform Act of 2015, to provide the youth officials with some form of compensation, as well as other benefits.

Angara, the chairman of the Senate committee on youth, said there is an urgent need to amend the law in order to provide the youth leaders with compensation because “just like the other local officials, they have an important role to play in their communities.”

“Apart from the SK chairman, all of the other youth officials are effectively volunteers. They don’t have salaries or honoraria or even allowances. This is a major reason why there are fewer people who want to join the SK and we have to do something about this,” Angara said.

The National Youth Commission (NYC) has indicated that many local government units either have incomplete SK Councils or do not have these at all.

Under the law, the SK is composed of the chairman and seven members, all of who are elected by the youth residents of the barangay. From the seven, a secretary and treasurer will be appointed.

The NYC noted that there are several areas of the country that do not have secretaries or treasurers because there are no takers.

Currently, only the SK chairman receives honoraria due to his status as an ex-officio member of the Sangguniang Barangay.

Angara has been an advocate of empowering officials at the grassroots level by treating them as  regular government employees with monthly salaries and benefits.

Among the reforms being sought by the SK Federations is to provide the SK members plantilla positions so that they will be compensated.

The Committee on Youth held an inquiry into the implementation of RA 10742 last Tuesday in order to determine which provisions are working in the law and the possible amendments needed to further improve the system.

During the hearing, SK Federation presidents from Cavite, Quezon City and Mandaluyong City also raised their concerns about the use of the SK funds as provided by RA 10742.

The SK is entitled to 10 percent of the general fund of the barangay for youth development and empowerment programs.

However, the SK Federation heads shared similar concerns about the application of this provision under the law.

They lamented the lack of guidance on how to go about using these funds and with the threat of possible disallowances by the Commission on Audit and even lawsuits, the SKs have not been able to utilize the money at all.

Citing an opinion of the Commission on Audit, Angara advised the SKs to tap the funds for their programs using the Joint Memorandum Circular No. 2019-001 of the Department of Budget and Management, NYC and Department of the Interior and Local Government as its basis and the existing laws and regulations on procurement to guide them.

A technical working group is now working on the proposed bill amending RA 10742.

Angara: Benefits for health workers to continue even after Bayanihan 2 expiration on June 30
EASTER SUNDAY MESSAGE OF SEN. SONNY ANGARA
Statement of Sen. Angara on the procurement of vaccines by the private sector
SK reform bill hurdles committee level-- Angara
Angara: Kouame an asset to Philippine basketball
Angara pushes for 100% increase in PDIC deposit insurance coverage
Angara: Pilot implementation of face-to-face classes needed before resumption nationwide
Immunization of the population expected to begin with the approval of the COVID-19 vaccination program bill-- Angara
Angara seeks exemption to donor’s tax for donations of COVID-19 vaccines and critical supplies
Angara: Growing number of out of school youth is a cause of concern
Angara: Ecommerce will help ensure the survival of MSMEs and boost economic growth
Angara bill seeks to assist LGUs in shifting to digital
2021 judiciary budget will ensure implementation of the Judges-at-Large Act and the judiciary marshal service – Angara
STATEMENT OF SEN SONNY ANGARA
ANGARA: PGH AND EAST AVENUE MEDICAL CENTER RECEIVE ADDITIONAL FUNDING UNDER THE 2021 GAA TO SERVE MORE FILIPINOS IN NEED OF MEDICAL ATTENTION
PCMC receives additional support under the 2021 GAA to provide even better services for children in need of medical attention-- Angara
Statement of Sen. Sonny Angara on the signing of the 2021 GAA
Christmas message of Sen. Sonny Angara
Angara: Displaced workers will continue to receive assistance under the 2021 budget
Improved internet services even in far flung areas expected with the increase in the budget for the National Broadband Program-- Angara
END_OF_DOCUMENT_TOKEN_TO_BE_REPLACED