ANGARA: WE MUST CREATE JOB OPPORTUNITIES FOR SENIOR CITIZENS 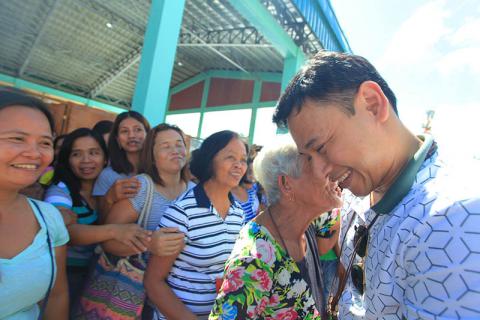 Aside from bigger and wider coverage of social pension, the country’s elderly population must be given employment opportunities to be productive even in their old age and keep them away from poverty, according to reelectionist Senator Sonny Angara.

Angara, a champion of the rights and welfare of senior citizens in the Senate, said many elderly people belonging to the age group 60 to 70 are still physically capable and are prepared to work and earn a living.

“Senior citizens who have the capacity and desire to work or be re-employed can have a shot at getting jobs again so they can live a life of dignity and empowerment,” Angara said. “Dapat ka-partner natin ang gobyerno sa paghahanap ng trabaho para sa mga seniors sa pribado man o pampublikong sektor.”

According to the senator who is running under the platform “Alagang Angara,” one of the major problems confronting the senior citizens is the lack of financial security since most of them have no more means to earn and largely depend on their meager savings or their children for sustenance.

Based on the 2018 estimates of the Commission on Population and Development, there are 8.7 million Filipinos over 60 years old, representing 8.2 percent of the country’s total population of 107 million.

The United Nations Population Fund projected in 2012 that by 2050, the population of senior citizens in the Philippines will grow by 15 percent to 23.63 million.

Data from the Coalition of Services of the Elderly (COSE)—an umbrella organization of 450 groups caring for senior citizens which recently endorsed Angara’s reelection bid—only 33 percent or 2.9 million of the elderly population are covered by contributory pension, such as the Social Security System, the Government Social Insurance System, and other pension systems.

Of the 5.8 million senior citizens with no contributory pension, only 3.4 million are currently covered by the Social Pension Program for Indigent Senior Citizens of the Department of Social Welfare and Development. This leaves 2.4 million elders with no pension at all.

It is for this reason why Angara is vigorously pushing for the passage of a bill that seeks to widen the coverage of the social pension program to include all poor senior citizens and double their pension to P1,000 from the current P500.

However, Angara said, it would help if capable senior citizens are still allowed to work because most of the time their pensions and retirement savings are not enough to take care of their needs.

He therefore appealed to local government units (LGUs) and the private sector to employ more members of the elderly population and make use of their skills and experience even for part-time or casual work.

“We are known as a caring society especially when it comes to our elderly. I appeal to the compassion of the private sector as well as our LGUs to provide work to our senior citizens,” said Angara, one of the authors of Republic Act 9994 or the Expanded Senior Citizens Act of 2010, which provides additional privileges and benefits to senior citizens, including VAT exemption.

Section 5 of RA 9257 or the Expanded Senior Citizens Act of 2003 mandates the government to provide employment assistance to senior citizens, who have the capacity and desire to work or be re-employed, in the form of information and matching services.

Under the law, private entities that will employ senior citizens as employees are entitled to an additional deduction from their gross income, equivalent to 15 percent of the total amount paid as salaries and wages to senior citizens, subject to the provisions of the National Internal Revenue Code.

Such employment, however, shall continue for a period of six months and that the annual income of a senior citizen does not exceed the poverty level as determined by the National Economic Development Authority (NEDA) for that year.

Angara inherited his advocacy for the elderly from his father, the late Senate President Edgardo Angara, who is responsible for the Senior Citizens Act of 1992, also known as the Angara Law.

Aside from the expanded social pension bill, Angara also filed a measure that would put an end to any form of senior citizen abuse—whether physical, psychological, or even economical—by providing stiffer penalties and strengthening institutional support for elderly victims of abuse. #

ANGARA: PGH AND EAST AVENUE MEDICAL CENTER RECEIVE ADDITIONAL FUNDING UNDER THE 2021 GAA TO SERVE MORE FILIPINOS IN NEED OF MEDICAL ATTENTION
PCMC receives additional support under the 2021 GAA to provide even better services for children in need of medical attention-- Angara
Statement of Sen. Sonny Angara on the signing of the 2021 GAA
Christmas message of Sen. Sonny Angara
Angara: Displaced workers will continue to receive assistance under the 2021 budget
Improved internet services even in far flung areas expected with the increase in the budget for the National Broadband Program-- Angara
Angara-- New and unfunded laws will receive funding under the 2021 GAA
Improved health responses needed to boost consumer confidence and spur economic growth -- Angara
Angara wants more public hospitals and medical professionals to ensure all Filipinos are provided with quality health care
Angara wants public libraries to provide essential services to learners under the new normal
Statement of Sen. Sonny Angara on the transmittal of the 2021 GAB by the House of Representatives
Angara bats for the naturalization of Angelo Kouame
Angara pushes for survivorship benefits for members of the National Prosecution Service
The President's report on the implementation of the Bayanihan 2
Angara calls for extension of waiver on fees for digital transactions of banks and mobile payment services
Angara to Comelec: Work on making it easier for seniors and PWDs to vote during elections
Angara: There should be no delays in the implementation of Bayanihan 2
Angara says 2022 deadline for registration of 90 million Filipinos to PhilSys ID should be achieved without delay
Angara to CHEd and SUCs: Let’s work together in keeping Filipino graduates in the Philippines
Statement of Sen. Sonny Angara  (law sponsor) on the enactment of Bayanihan 2
END_OF_DOCUMENT_TOKEN_TO_BE_REPLACED