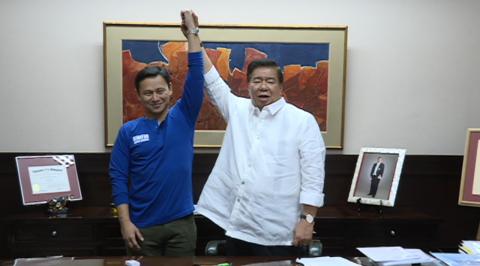 Senator Sonny Angara has secured another crucial backing for his reelection bid, this time from Senate Minority Leader Franklin Drilon who hails from the vote-rich Iloilo province.

Drilon’s endorsement through a video message released recently completes the support of the entire Senate leadership for Angara’s run for another full six-year term as senator in the upcoming midterm elections.

Drilon, the Senate President in the 16th Congress, topped the 2016 senatorial polls with 18.6 million votes.

Senator Panfilo “Ping” Lacson, meanwhile, named Angara as one of 11 senatorial candidates he would vote for in the May 13 elections.

His candidacy is also supported by several organizations, political parties and cause-oriented groups, such as One Batangas, Confederation of Sugar Producers Associations Inc.; Filipinos for Peace, Justice and Progress Movement or FPJPM; Coalition of Services of the Elderly Inc.; Coop-NATCCO Party-list; and Davao-based District III Women Federation Inc. #