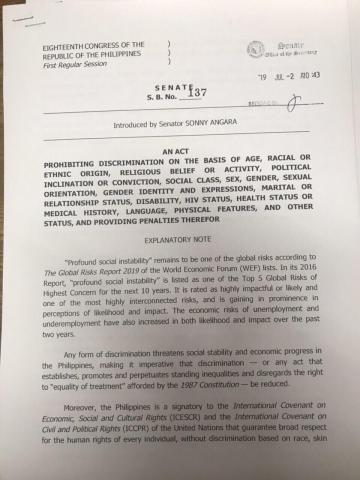 “Discrimination remains a problem be it for women, children, persons with disabilities or the LGBTQ community. We are currently enjoying remarkable economic growth, but while there is still discrimination taking place, we cannot call ourselves a truly progressive nation,” Angara said.

In line with this, Angara has filed Senate Bill 137 or the Comprehensive Anti-Discrimination Act of 2019, to cover as wide a range of discriminatory practices as possible.

The bill lists 13 ‘acts of discrimination’ that covers a broad spectrum of actions and the consequences of these on the affected parties.

It will be deemed illegal for any person to commit any acts that promote and encourage stigma. This includes content in the media and educational textbooks.

No person will be denied his political, civil and cultural rights.

A person cannot be refused admission, denied honors or scholarships or be expelled from any educational institution on the basis of the protected attributes.

It is also illegal to deny the right to expression, whether it is in the form of speech, deportment, dress, bodily characteristics or choice of name.

“There have been instances in the past where transgender students were prohibited from taking part in their graduation rites for cross dressing. This is one example of discrimination,” Angara said.

A person cannot be denied employment, refused promotion or even terminated on the basis of the protected attributes.

No person will be denied access to goods and services, including being refused entry into an establishment.

The other acts of discrimination included in the bill are: the denial of the right to organize; inflicting harm on health and well-being; engaging in profiling; abuses by state and non-state actors; detention and confinement; inciting hatred or violence; and other analogous circumstances.

The bill prescribes a penalty of one to six years imprisonment and/or a fine of up to P500,000 for any person found to have committed acts of discrimination.

“Discrimination is a problem that is not confined to a few people alone. It concerns everyone. No one should feel helpless when faced with discrimination. We appeal to our colleagues to support this bill,” Angara said.

Angara: Pilot implementation of face-to-face classes needed before resumption nationwide
Immunization of the population expected to begin with the approval of the COVID-19 vaccination program bill-- Angara
Angara seeks exemption to donor’s tax for donations of COVID-19 vaccines and critical supplies
Angara: Growing number of out of school youth is a cause of concern
Angara: Ecommerce will help ensure the survival of MSMEs and boost economic growth
Angara bill seeks to assist LGUs in shifting to digital
2021 judiciary budget will ensure implementation of the Judges-at-Large Act and the judiciary marshal service – Angara
STATEMENT OF SEN SONNY ANGARA
ANGARA: PGH AND EAST AVENUE MEDICAL CENTER RECEIVE ADDITIONAL FUNDING UNDER THE 2021 GAA TO SERVE MORE FILIPINOS IN NEED OF MEDICAL ATTENTION
PCMC receives additional support under the 2021 GAA to provide even better services for children in need of medical attention-- Angara
Statement of Sen. Sonny Angara on the signing of the 2021 GAA
Christmas message of Sen. Sonny Angara
Angara: Displaced workers will continue to receive assistance under the 2021 budget
Improved internet services even in far flung areas expected with the increase in the budget for the National Broadband Program-- Angara
Angara-- New and unfunded laws will receive funding under the 2021 GAA
Improved health responses needed to boost consumer confidence and spur economic growth -- Angara
Angara wants more public hospitals and medical professionals to ensure all Filipinos are provided with quality health care
Angara wants public libraries to provide essential services to learners under the new normal
Statement of Sen. Sonny Angara on the transmittal of the 2021 GAB by the House of Representatives
Angara bats for the naturalization of Angelo Kouame
END_OF_DOCUMENT_TOKEN_TO_BE_REPLACED