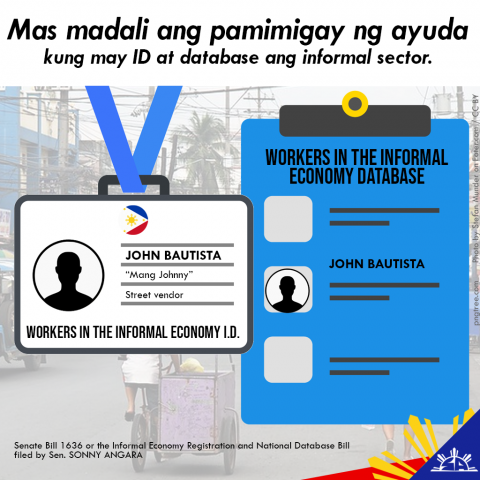 
To provide protection to the informal workers and to ensure they receive aid from the government in times of emergencies, Senator Sonny Angara is calling for the creation of a national database of all members of the informal economy.


In filing Senate Bill 1636 or the Informal Economy Registration and National Database Act, Angara noted how a significant number of informal workers were not able to enjoy any of the financial assistance provided by the government during the lockdowns brought about by the COVID-19 pandemic.


The government agencies involved in the distribution of the cash assistance, as well as the local government units, found it difficult to identify and reach the informal workers because they were not registered in any of their databases.


In a recent Senate hearing, the Alliance of Workers in the Informal Economy noted that there are varying interpretations among the LGUs on who should be covered in the informal sector.


The International Labour Organization noted the problematic situation as public authorities are struggling to identify and reach workers and enterprises in the informal economy who are mostly unregistered.


“The members of the informal economy suffered just as much or even more than their counterparts in the formal economy and yet they missed out on the assistance that was provided by the government,” Angara said.


“We know them by face and oftentimes by name. They provide us with goods and services on a daily basis. They are independent and small-scale. Many of them are home-based operations so when a crisis such as this pandemic arises, they are crippled and have little or no means to survive,” he added.


The bill defines the informal economy as all economic activity by workers and economic units that are, in law or in practice, not covered or insufficiently covered by laws or formal arrangements.


Informal economic units refer to those that are owned by individuals working on their own account either alone or with the help of contributing family workers; household enterprises engaged in the production of goods and services or unincorporated enterprises owned by households, cooperatives and other social and solidarity economy units.


Angara pointed out that they are not just the street vendors, but the domestic workers, agricultural workers or fisherfolk and employees holding informal jobs in or for formal enterprises.


They have no job security and do not enjoy any legal protection and benefits even if they are receiving compensation.


Based on a 2008 informal sector survey conducted by the Philippine Statistics Authority, the number of workers in the informal economy was estimated at 10.5 million. The labor force survey in 2017 indicated an increase in the figure to 15.6 million.


As a result of the lockdowns, the restrictions on imposed on the movement of people, and the impact of these on businesses in general, Angara said he expects a further increase in the number of informal workers this year.


“The availability of comprehensive data on this vulnerable group would provide government agencies a clearer picture of their needs and concerns and better targeted assistance programs, particularly in times of crisis,” Angara said in his bill.


The LGU would issue an identification card and record book listing all services and benefits availed of by the informal worker.


All of the registered workers will be included in a local database maintained by the LGU and this will be revalidated every two years.


For the informal economic units, the LGUs will be tasked to keep a record of them in their local database.


An informal economy one-stop shop shall be established by the LGU to process the transactions and business permit applications.


The Department of Labor and Employment, in coordination with the National Economic and Development Authority, shall create and maintain a national database of workers, economic units and organizations or associations in the informal economy, using the registration data collected by the LGUs.


Since his first term as a congressman in 2004, Angara has been filing the bill seeking to empower the workers in the informal sector or the proposed Magna Carta for Workers in the Informal Economy (MACWIE).


In the current 18th Congress, Angara has refiled the measure as Senate Bill No. 328.

Angara celebrates the enactment of three laws for the youth
Statement of Sen Angara on the Enactment into Law of the Social Pension for Seniors
Sen. Angara on the passing of former Pres. Fidel V Ramos
Angara-- Restore the heritage sites damaged by the Abra quake at the soonest possible time
Angara sees the establishment of satellite specialty hospitals as timely and doable
Reaksyon ni Sen. Sonny Angara sa SONA ni PBBM
Statement of Senator Sonny Angara
INCOMING DBM SECRETARY NI PBBM, HIGHLY-QUALIFED, MAY MAIPAGMAMALAKING TRACK-RECORD -- ANGARA
Statement of Sen. Sonny Angara on the Appointment of Amenah Pangandaman as DBM Secretary
PDIC charter amendments for a stronger and more resilient banking system—Angara
Kaugnay sa muling paglobo ng COVID cases sa bansa: “MAGPABAKUNA, SUMUNOD SA HEALTH PROTOCOLS AT PATULOY NA PAG-INGATAN ANG KALUSUGAN” - ANGARA
Statement of Committee on Finance Chairman, Sen. Sonny Angara on the signing of the 2022 GAA
Angara reminds PhilHealth of their obligations to the public
Threat of Omicron highlights need to improve biosurveillance and genome sequencing capabilities—Angara
Angara: Don’t let vaccines go to waste-- Allow booster shots for private sector workers
SEN. ANGARA ON THE THREAT OF HOSPITALS TO WITHDRAW FROM PHILHEALTH SYSTEM BECAUSE OF DELAYED REIMBURSMENTS OF CLAIMS:
Angara: Decline in COVID cases should not result in complacency
Angara: Go the extra mile to vaccinate our senior citizens
Angara to DOLE: Targeted interventions needed to ensure no one is left behind
It’s about time to rebuild the homes of the people of Marawi—Angara
END_OF_DOCUMENT_TOKEN_TO_BE_REPLACED