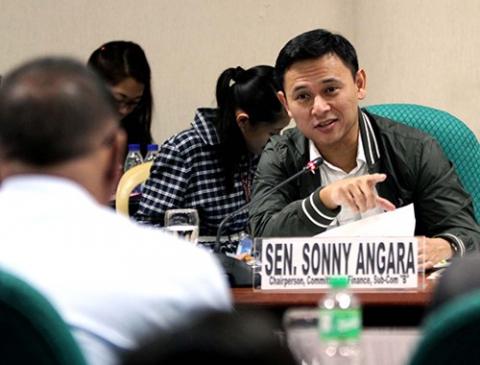 Angara has filed Senate Bill 136 or the Magna Carta for Barangays in order to provide the officials of barangays better pay and benefits and greater local autonomy.

Under the bill, barangay officials will be treated as regular government employees, meaning they will receive fixed salaries, allowances, insurance, medical and dental coverage, retirement and other fringe benefits.

The punong barangay will be entitled to the salary being received by a sangguniang bayan member in his or her city or municipality.

An amount equivalent to 80 percent of the salary of a sanggguniang bayan member will be received by the six sangguniang barangay members.

The Kabataang Barangay chairman, barangay secretary and barangay treasurer, on the other hand, will get an amount equivalent to 75 percent of the salary of a sangguniang bayan member.

Barangay officials do not receive fixed salaries and are only entitled to honoraria and other allowances.

This bill was previously filed by Angara in the 17th Congress, but according to the senator, the needs of the barangay remain the same and its role is as important as ever, thus the need to institute a Magna Carta for Barangays.

Apart from addressing the salaries of the barangay officials, the bill also outlines the basic priorities in the barangay, namely maintaining a regular supply of clean and potable water; providing public transportation for its constituents; and the establishment of at least one elementary school, health center and barangay hall within its jurisdiction.

To ensure the barangays enjoy local autonomy as envisioned by the Local Government Code of the Philippines, Angara said the National Treasury should automatically remit to the barangays their just share from national taxes at the end of every calendar year.

Funds intended for the maintenance of barangay roads, bridges and other infrastructure will go directly to the general fund of the barangays for disposition by its officials.

Moreover, the barangays will be entitled to an equitable share of the proceeds derived from the exploitation, development and utilization of natural wealth within its territory.

Every barangay will sponsor at least one scholarship grant every year leading to any bachelor degree for bona fide residents.

“We cannot overemphasize the importance of the barangay in the lives of every household. Before any matter goes up to the Mayor or the courts, it is the barangay that is tasked to resolve this. Panahon na para palakasin natin ang ating mga barangay sa pamamagitan nitong Magna Carta for Barangays,” Angara said.

Angara: Benefits for health workers to continue even after Bayanihan 2 expiration on June 30
EASTER SUNDAY MESSAGE OF SEN. SONNY ANGARA
Statement of Sen. Angara on the procurement of vaccines by the private sector
SK reform bill hurdles committee level-- Angara
Angara: Kouame an asset to Philippine basketball
Angara pushes for 100% increase in PDIC deposit insurance coverage
Angara: Pilot implementation of face-to-face classes needed before resumption nationwide
Immunization of the population expected to begin with the approval of the COVID-19 vaccination program bill-- Angara
Angara seeks exemption to donor’s tax for donations of COVID-19 vaccines and critical supplies
Angara: Growing number of out of school youth is a cause of concern
Angara: Ecommerce will help ensure the survival of MSMEs and boost economic growth
Angara bill seeks to assist LGUs in shifting to digital
2021 judiciary budget will ensure implementation of the Judges-at-Large Act and the judiciary marshal service – Angara
STATEMENT OF SEN SONNY ANGARA
ANGARA: PGH AND EAST AVENUE MEDICAL CENTER RECEIVE ADDITIONAL FUNDING UNDER THE 2021 GAA TO SERVE MORE FILIPINOS IN NEED OF MEDICAL ATTENTION
PCMC receives additional support under the 2021 GAA to provide even better services for children in need of medical attention-- Angara
Statement of Sen. Sonny Angara on the signing of the 2021 GAA
Christmas message of Sen. Sonny Angara
Angara: Displaced workers will continue to receive assistance under the 2021 budget
Improved internet services even in far flung areas expected with the increase in the budget for the National Broadband Program-- Angara
END_OF_DOCUMENT_TOKEN_TO_BE_REPLACED