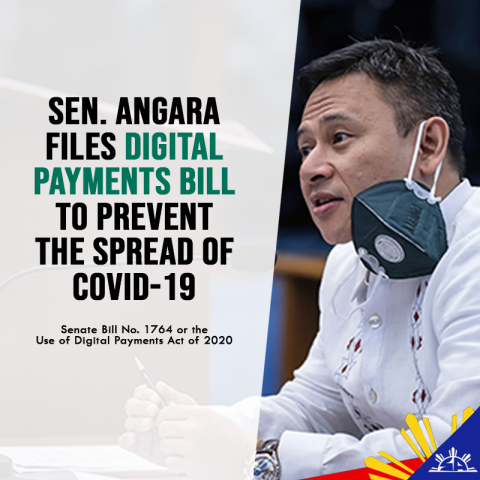 For faster and more efficient transactions in both the government and private sector, all agencies and establishments should institute digital payment systems at the soonest possible time.

Senator Sonny Angara took note of the growth of digital payments in the Philippines at a rate of 27% to 30%, which is higher than the 25% average of emerging Asian countries, but is still just one percent by volume of the estimated 2.5 billion payments made per month.

Data from the Bangko Sentral ng Pilipinas (BSP) suggest that the low volume of digital payments is due to the absence of banking offices in parts of the country and the high percentage of households that do not own bank accounts.

BSP notes that 37% of the 1,634 cities and municipalities across the country do not have banking offices and that 81.3% of households in Metro Manila have no bank accounts at all.

“Our experience with the COVID-19 pandemic has highlighted the need to institute digital payment systems and to have every Filipino benefit from cashless transactions. We saw thousands of people lining up for the distribution of cash aid under the social amelioration program, which was not only inefficient, but unnecessarily exposed the beneficiaries and the people paying out the money to possible infection to the virus,” Angara said.

To help fast track the adoption of digital payments for financial transactions of the government and all merchants, Angara has filed Senate Bill 1764 or the Use of Digital Payments Act of 2020.

A counterpart measure to the bill filed by Bataan Rep. Jose Enrique Garcia III, Senate Bill 1764 seeks to provide the enabling environment to accelerate the adoption of digital payments in the country.

Under the bill, all national government agencies (NGA), government owned and controlled corporations (GOCC) and local government units (LGU) will be required to “utilize safe and efficient digital payment” in the collection of taxes, fees, tolls, imposts and other revenues and in the payment of goods, services and other disbursements.

According to the Better Than Cash Alliance, whose members consists of national governments, global brands, UN agencies and humanitarian NGOs, a lot of time and resources are wasted in making and receiving inefficient cash payments.

It cited the case of Mexico, which saved nearly $1.27 billion on costs to distribute wages, pensions and social welfare when it digitized and centralized payments.

The BSP shall accelerate the adoption by all payment system providers of a national Quick Response (QR) code standard to hasten the interoperability of QR-driven payment services and eliminate the need for merchants and clients to maintain several accounts.

LGUs, through the issuance of their respective ordinances, shall require merchants within their localities to establish and/or outsource arrangements and/or mechanisms to enable them to receive payments from clients and make payments to creditors and suppliers in digital form as a pre-requisite for the approval or renewal of their business permits.

The toll expressway operators are among those who have started transitioning to fully cashless transactions in compliance with the order of the Department of Transportation for its attached agencies to implement contactless and cashless systems for transactions.

It was reported that several of the people manning the toll booths of the expressways have contracted COVID-19 while performing their duties.

Angara celebrates the enactment of three laws for the youth
Statement of Sen Angara on the Enactment into Law of the Social Pension for Seniors
Sen. Angara on the passing of former Pres. Fidel V Ramos
Angara-- Restore the heritage sites damaged by the Abra quake at the soonest possible time
Angara sees the establishment of satellite specialty hospitals as timely and doable
Reaksyon ni Sen. Sonny Angara sa SONA ni PBBM
Statement of Senator Sonny Angara
INCOMING DBM SECRETARY NI PBBM, HIGHLY-QUALIFED, MAY MAIPAGMAMALAKING TRACK-RECORD -- ANGARA
Statement of Sen. Sonny Angara on the Appointment of Amenah Pangandaman as DBM Secretary
PDIC charter amendments for a stronger and more resilient banking system—Angara
Kaugnay sa muling paglobo ng COVID cases sa bansa: “MAGPABAKUNA, SUMUNOD SA HEALTH PROTOCOLS AT PATULOY NA PAG-INGATAN ANG KALUSUGAN” - ANGARA
Statement of Committee on Finance Chairman, Sen. Sonny Angara on the signing of the 2022 GAA
Angara reminds PhilHealth of their obligations to the public
Threat of Omicron highlights need to improve biosurveillance and genome sequencing capabilities—Angara
Angara: Don’t let vaccines go to waste-- Allow booster shots for private sector workers
SEN. ANGARA ON THE THREAT OF HOSPITALS TO WITHDRAW FROM PHILHEALTH SYSTEM BECAUSE OF DELAYED REIMBURSMENTS OF CLAIMS:
Angara: Decline in COVID cases should not result in complacency
Angara: Go the extra mile to vaccinate our senior citizens
Angara to DOLE: Targeted interventions needed to ensure no one is left behind
It’s about time to rebuild the homes of the people of Marawi—Angara
END_OF_DOCUMENT_TOKEN_TO_BE_REPLACED