Angara—Commuting is definitely a challenge. Let’s come up with solutions now 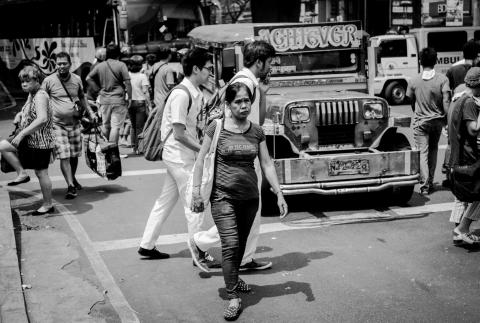 "Transport crisis or not, the fact that thousands of commuters are having an extremely difficult time getting to their destinations should already prompt immediate action from the entire government.

While some people are preoccupied with arguing on semantics, the students and employees are dealing with their daily struggle with how to get to work and school.

We must focus on finding solutions immediately. No one who commutes finds any amusement in memes or satires about statements being made by this or that person. What they want is to know that something is being done and they are not being ignored.

Traffic along EDSA and the other major thoroughfares of Metro Manila is not going to ease anytime soon. To make things worse, the mass transit systems are breaking down, leaving commuters with few options on how to get from point A to point B.

While we are waiting for the big-ticket infrastructure projects such as the skyway extension, MRT and LRT line expansions and rehabilitation of the Philippine National Railways, there is one alternative that to me is easier and faster to implement, and that is the Pasig River ferry system.

I have mentioned this before after seeing the potential of the Pasig River ferry as a way to ease traffic in the metropolis. A feasibility study has already been conducted for this project and from what we have been told, we can have a fully operational ferry transport system in just one year.

Unlike the road infrastructure, which entails massive disruptions to traffic and other issues such as road right of way, the Pasig River ferry project simply involves constructing or refurbishing the stations and purchasing the vessels.

Of course some dredging has to be done to ensure the ferries will be able to traverse the entire stretch of the Pasig River without issue, but I’m confident the Department of Public Works and Highways has the capability to do this.

There are presently 14 ferry stations situated along the Pasig River, out of which only 11 are operational. The current line can transport passengers from Pasig-Mandaluyong-Makati-Manila.

The current fleet consists of nine passenger boats but only two are running daily.

Improving ridership is definitely a challenge, but one that can easily be addressed by ensuring that the ferry system will be able to operate reliably and consistently. Passengers need to know that the ferry will arrive on time and that they will get to their destinations on schedule.

Eventually, we have to ensure passenger access to the ferry stations. This means the riders should be able to get to and from the other modes of transport such as the MRT and LRT stations and bus stops.

We need to get this done right away if we want to ease traffic congestion in Metro Manila. Many of the major infrastructure projects will not be completed until after the Duterte administration. Let’s come up with ways to provide relief to our commuters at an earlier time."

ANGARA: PGH AND EAST AVENUE MEDICAL CENTER RECEIVE ADDITIONAL FUNDING UNDER THE 2021 GAA TO SERVE MORE FILIPINOS IN NEED OF MEDICAL ATTENTION
PCMC receives additional support under the 2021 GAA to provide even better services for children in need of medical attention-- Angara
Statement of Sen. Sonny Angara on the signing of the 2021 GAA
Christmas message of Sen. Sonny Angara
Angara: Displaced workers will continue to receive assistance under the 2021 budget
Improved internet services even in far flung areas expected with the increase in the budget for the National Broadband Program-- Angara
Angara-- New and unfunded laws will receive funding under the 2021 GAA
Improved health responses needed to boost consumer confidence and spur economic growth -- Angara
Angara wants more public hospitals and medical professionals to ensure all Filipinos are provided with quality health care
Angara wants public libraries to provide essential services to learners under the new normal
Statement of Sen. Sonny Angara on the transmittal of the 2021 GAB by the House of Representatives
Angara bats for the naturalization of Angelo Kouame
Angara pushes for survivorship benefits for members of the National Prosecution Service
The President's report on the implementation of the Bayanihan 2
Angara calls for extension of waiver on fees for digital transactions of banks and mobile payment services
Angara to Comelec: Work on making it easier for seniors and PWDs to vote during elections
Angara: There should be no delays in the implementation of Bayanihan 2
Angara says 2022 deadline for registration of 90 million Filipinos to PhilSys ID should be achieved without delay
Angara to CHEd and SUCs: Let’s work together in keeping Filipino graduates in the Philippines
Statement of Sen. Sonny Angara  (law sponsor) on the enactment of Bayanihan 2
END_OF_DOCUMENT_TOKEN_TO_BE_REPLACED