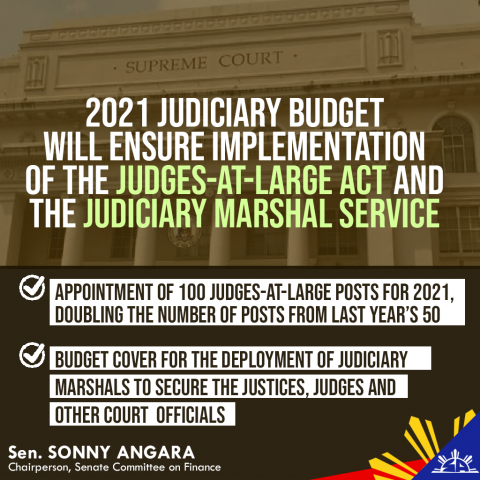 The judiciary will be able to hasten the adjudication of several pending court cases with the support provided by Congress under the 2021 national budget for the appointment of judges-at-large, Senator Sonny Angara said today.

Angara, who steered the early approval of the 2021 General Appropriations Act as chairman of the Senate’s Committee on Finance, said a total of P244.988 million was included in the budget of the judiciary for the implementation of Republic Act 11459 or the Judges-at-Large Act.

Enacted on August 13, 2019, RA 11459 mandates the creation of judges-at-large posts for the regional and municipal trial courts in order to decongest the courts of its dockets.

These appointed judges-at-large will have no permanent salas and may be assigned by the Supreme Court as acting or assisting judges to any RTC or MTC in the country “as public interest may require.”

They are entitled to salaries, privileges, allowances, emoluments, benefits, rank and title of regular RTC and MTC judges.

The funds allocated for the judiciary will pave the way for the appointment of 100 judges-at-large posts for 2021.

Angara noted that the National Expenditure Program submitted by Malacañang to Congress last year did not contain a provision for the appointment of judges-at-large.

“For 2020, the first year of implementation of the law, we provided funding to cover for the creation of 50 judges-at-large posts. For 2021, we will double the number of posts to 100 as requested by our Chief Justice Diosdado Peralta,” Angara said.

“We want to sustain the implementation of the Judges-at-Large Act to help ensure the delivery of speedy justice in the country. With the appointment of more judges, we can expect to see the resolution of more cases and eventually free up the courts of its backlog,” Angara added.

The principal authors of RA 11459 are Angara in the Senate and Speaker Lord Allan Velasco in the House of Representatives.

Also included in the budget of the judiciary for 2021 is an augmentation of P50 million to cover for the deployment of judiciary marshals to secure the justices, judges and other court officials.

Angara said the the inclusion of this funding was prompted by the appeals of the judiciary for the creation of a judicial marshal service as the threats and attacks against judges and other court officials continue to take place in the country.

The Senate is set to approve Senate Bill 1947 or the proposed Judiciary Marshals Act, of which Angara is one of the authors.

Once approved, an office of the judiciary marshals will be established under the Supreme Court and its continued funding will be ensured as part of the annual GAA.

2020 GAA has over P300 million for the implementation of the Innovation Act-- Angara
DICT gets P6.2 billion hike in its 2020 budget to make the government more digital and interconnected
Senator Sonny Angara on the eruption of the Taal Volcano
Angara urges DOLE to provide emergency employment and assistance to workers displaced by the Taal eruption
Statement of Sen. Sonny Angara on the bushfire crisis in Australia
Angara—The creation of judges-at-large posts will result in the faster resolution of cases in the courts
Angara- Revival of the EDCOM is needed to address the new challenges of the Philippine education sector
Wish of Sen Sonny Angara for the New Year
Education remains top priority under the 2020 national budget- Angara
Angara-- Civil servants to enjoy pay hikes starting January 1, 2020 under SSL-5
With the national team’s impressive SEA Games performance, Angara pushes for bigger cash incentives for medalists
Angara files resolutions honoring the Philippine National Arnis Team and Majority Leader Zubiri, as the father of the sport
Angara seeks to remember and honor the hero cop killed while protecting civilians
Health, education and social services are prioritized in the Senate committee report on the P4.1 trillion 2020 national budget—Angara
Angara seeks an inquiry into the high incidence of child and teenage pregnancies
Angara wants more social welfare attaches to aide OFWs in distress
Senator Sonny Angara's best of the decade, isang dekada ng Alagang Angara
All Filipinos should have access to oral health care-- Angara
Angara backs the imposition of a price ceiling on 120 new medicines
Statement on the passing of former Senate President Nene Pimentel Jr.
END_OF_DOCUMENT_TOKEN_TO_BE_REPLACED