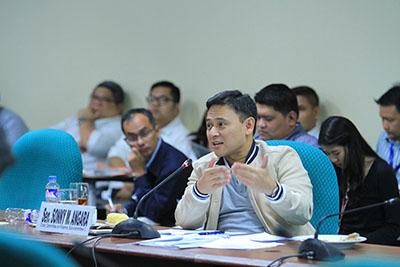 “Since droughts and water scarcity have become a more common occurrence, it is necessary that we come up with measures to improve the country’s water management system to prevent a full-blown water crisis in the future,” Angara said.

Angara issued the statement as authorities warned of possible water shortages in the coming months due to the El Niño phenomenon.

According to the lawmaker, the government needs to build more water catchment basins and other infrastructure requirements to meet the country’s water demands.

He also called for full implementation of a 30-year-old law, Republic Act 6716, which mandated the construction of rainwater collectors in every barangay nationwide.

“RA 6716, which was approved in March 1989, mandates the collection of rainwater in barangays to ensure provision of fresh water,” Angara pointed out. “This covers the entire process, from catchment to treatment and distribution.”

Angara noted that community-based rainwater harvesting systems had been proven quite effective in several countries like India, Malaysia, Thailand and Singapore. “Why shouldn’t we implement the same, especially since we get an abundance of rain during the rainy season?” he asked.

As early as 2007, the Asian Development Bank had already warned that the country’s clean water supply could be depleted by 2025 if the government failed to act and invest in water management and infrastructure.

Because of the situation, the country’s ageing and inadequate water infrastructure needs immediate review and rehabilitation, the reelectionist senator said.

“This recurring water problem needs urgent attention. Every minute of inaction prolongs and compounds the problem of overexploitation and unsustainable use of water, a vital but increasingly limited resource,” Angara added.

ANGARA: PGH AND EAST AVENUE MEDICAL CENTER RECEIVE ADDITIONAL FUNDING UNDER THE 2021 GAA TO SERVE MORE FILIPINOS IN NEED OF MEDICAL ATTENTION
PCMC receives additional support under the 2021 GAA to provide even better services for children in need of medical attention-- Angara
Statement of Sen. Sonny Angara on the signing of the 2021 GAA
Christmas message of Sen. Sonny Angara
Angara: Displaced workers will continue to receive assistance under the 2021 budget
Improved internet services even in far flung areas expected with the increase in the budget for the National Broadband Program-- Angara
Angara-- New and unfunded laws will receive funding under the 2021 GAA
Improved health responses needed to boost consumer confidence and spur economic growth -- Angara
Angara wants more public hospitals and medical professionals to ensure all Filipinos are provided with quality health care
Angara wants public libraries to provide essential services to learners under the new normal
Statement of Sen. Sonny Angara on the transmittal of the 2021 GAB by the House of Representatives
Angara bats for the naturalization of Angelo Kouame
Angara pushes for survivorship benefits for members of the National Prosecution Service
The President's report on the implementation of the Bayanihan 2
Angara calls for extension of waiver on fees for digital transactions of banks and mobile payment services
Angara to Comelec: Work on making it easier for seniors and PWDs to vote during elections
Angara: There should be no delays in the implementation of Bayanihan 2
Angara says 2022 deadline for registration of 90 million Filipinos to PhilSys ID should be achieved without delay
Angara to CHEd and SUCs: Let’s work together in keeping Filipino graduates in the Philippines
Statement of Sen. Sonny Angara  (law sponsor) on the enactment of Bayanihan 2
END_OF_DOCUMENT_TOKEN_TO_BE_REPLACED