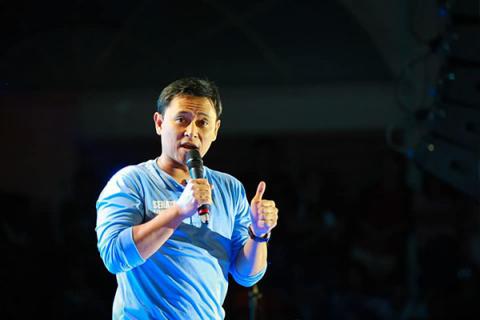 Reelectionist Senator Sonny Angara said there should be no delay in the release of the cash benefits under the Pantawid Pamilyang Pilipino Program (4Ps), the government’s flagship anti-poverty alleviation initiative to ease the plight of some 4.4 million active household beneficiaries.

Angara said the 12-year-old human development program—designed to keep children in school and keep them healthy—had been proven to be an effective tool for poverty alleviation. First implemented in 2007, 4Ps invests in the health and education of poor households, particularly children aged 0-18 years old.

“We should find creative and efficient ways on how the cash grants for 4Ps beneficiaries can be distributed in a timely manner,” said Angara, who is scheduled to visit the province of Palawan on Thursday to attend the campaign rally of PDP-Laban, the political party of President Rodrigo Duterte.

Palawan is home to 76,813 active household beneficiaries of the program spread in 22 municipalities and the provincial capital, based on data from the Department of Social Welfare and Development as of February 28, 2019, and majority are in Puerto Princesa at 7,546. Also in the list of municipalities with the highest number of recipients are Bataraza, 7,007 households; Taytay, 6929; and Rizal, 5,228.

Patterned after the CCT scheme implemented in other developing countries, 4Ps provides cash grants to beneficiaries if they comply with the conditions set under the program.

Angara is one of the authors of a bill seeking to institutionalize 4Ps, which is now one step closer to becoming a law after the Senate and the House of Representatives approved the measure.

The senator said it was important to make 4Ps permanent through legislation to ensure its continuity and unhampered implementation by any administration.

When he filed his bill in 2016, Angara backed up the measure with studies showing that 4Ps reduced the total poverty among CCT beneficiaries by 6.5 percent to 58 percent from 64.5 percent, according to a joint study by the World Bank and Australian Aid.

It also decreased food poverty rate from 35.2 percent to 28.5 percent after the program implementation, or by 6.7 percentage points. This implied that 1.3 million Filipinos had been plucked out of poverty through 4Ps.

Angara: Benefits for health workers to continue even after Bayanihan 2 expiration on June 30
EASTER SUNDAY MESSAGE OF SEN. SONNY ANGARA
Statement of Sen. Angara on the procurement of vaccines by the private sector
SK reform bill hurdles committee level-- Angara
Angara: Kouame an asset to Philippine basketball
Angara pushes for 100% increase in PDIC deposit insurance coverage
Angara: Pilot implementation of face-to-face classes needed before resumption nationwide
Immunization of the population expected to begin with the approval of the COVID-19 vaccination program bill-- Angara
Angara seeks exemption to donor’s tax for donations of COVID-19 vaccines and critical supplies
Angara: Growing number of out of school youth is a cause of concern
Angara: Ecommerce will help ensure the survival of MSMEs and boost economic growth
Angara bill seeks to assist LGUs in shifting to digital
2021 judiciary budget will ensure implementation of the Judges-at-Large Act and the judiciary marshal service – Angara
STATEMENT OF SEN SONNY ANGARA
ANGARA: PGH AND EAST AVENUE MEDICAL CENTER RECEIVE ADDITIONAL FUNDING UNDER THE 2021 GAA TO SERVE MORE FILIPINOS IN NEED OF MEDICAL ATTENTION
PCMC receives additional support under the 2021 GAA to provide even better services for children in need of medical attention-- Angara
Statement of Sen. Sonny Angara on the signing of the 2021 GAA
Christmas message of Sen. Sonny Angara
Angara: Displaced workers will continue to receive assistance under the 2021 budget
Improved internet services even in far flung areas expected with the increase in the budget for the National Broadband Program-- Angara
END_OF_DOCUMENT_TOKEN_TO_BE_REPLACED