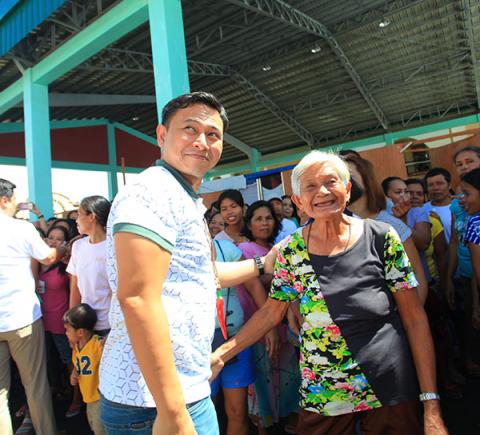 Increasing the social pension of indigent senior citizens will be a top priority of Senator Sonny Angara if he is reelected to Senate for another six-year term.

Angara, one of the authors of Republic Act 9994 or the Expanded Senior Citizens Act of 2010, said the social pension provided for under the law must be doubled from the current P500 to P1,000 per month, and its coverage should be expanded to include those without any form of pension.

“By doubling the social pension for the poor elderly, we wish to accomplish three important goals: add another layer of safeguard to ensure that they are taken care of, close the pension coverage gap, and further recognize the efforts and contribution of our senior citizens,” said the lawmaker from Aurora who is running under the platform “Alagang Angara.”

Angara co-authored the Expanded Senior Citizens Act when he was still a member of the House of Representatives representing the lone district of Aurora province. The law provided additional privilege and benefits to senior citizens, such as social pension and exemption from the coverage of 12 percent value-added tax or VAT.

The lawmaker is also one of the authors of RA 10645, which gave mandatory PhilHealth coverage to all senior citizens.

Angara inherited his advocacy for the elderly from his father, the late Senate President Edgardo Angara, who was responsible for the Senior Citizens Act of 1992, also known as the Angara Law.

The senator has been pushing a bill seeking to double the amount of social pension that the senior citizens are receiving under RA 9994 and widen the coverage of beneficiaries to include those who without any form of pension.

The measure also proposes that the amount and coverage of the social pension program be reviewed every two years after its enactment into law, in order to include also those receiving “below basic” pension or those receiving pension amounting to P3,400 and below from the Social Security System (SSS) and P5,000 and below from the Government Service Insurance System (GSIS).

“This will provide social protection to close to 6 million vulnerable senior citizens,” Angara pointed out.

According to the senator, one of the major problems confronting the senior citizens is the lack of financial security since most of them have no more means to earn and largely depend on their meager savings or their children for sustenance.

Based on the 2018 estimates of the Commission on Population and Development, there are 8.7 million Filipinos over 60 years old, representing 8.2 percent of the country’s total population of 107 million.

The United Nations Population Fund projected in 2012 that by 2050, the population of senior citizens in the Philippines will grow by 15 percent to 23.63 million.

Data from the Coalition of Services of the Elderly (COSE)—an umbrella organization of 450 groups caring for senior citizens that recently endorsed Angara’s reelection bid—only 33 percent or 2.9 million of the elderly population are covered by contributory pension, such as the SSS, GSIS, and other pension systems.

Of the 5.8 million senior citizens with no contributory pension, only 3.4 million are currently covered by the Social Pension Program for Indigent Senior Citizens of the Department of Social Welfare and Development. This leaves 2.4 million elders with no pension at all.

Angara to LGUs: Protect our frontliners, PUIs, PUMs and their families
Angara tells DSWD to release cash assistance to the poor immediately
COVID positive Angara continues to help despite isolation
Statement of Senator Sonny Angara
Angara says volunteer health workers should receive hazard pay, other benefits too
Angara: Find ways to provide aid to the people affected by the COVID-19 quarantine
Angara to LGUs and DSWD: Take care of the needs of quarantined families
Consider the welfare of workers in addressing COVID-19-- Angara
Angara urges schools to adopt the sablay as a replacement of togas for graduation ceremonies
Angara on the first local transmission of COVID-19: Be vigilant but don’t panic
Angara calls on DOLE to conduct a survey of sectors where jobs are being lost due to COVID-19
Angara: It is time to transform the Philippines from a consuming economy to one that produces
Finance committee to conduct a comprehensive review of government’s programs on industrialization and jobs generation-- Angara
Angara wants a review of all laws and programs for the Filipino youth
DTI gets unprecedented increase in 2020 budget for Tatak Pinoy Initiatives-- Angara
Angara seeks an increase in the bed capacity of the East Avenue Medical Center
Senator Angara urges immediate assessment after alert level lowered for Taal Volcano
Statement of Senator Angara on the sudden demise of Kobe Bryant
2020 GAA has over P300 million for the implementation of the Innovation Act-- Angara
DICT gets P6.2 billion hike in its 2020 budget to make the government more digital and interconnected
END_OF_DOCUMENT_TOKEN_TO_BE_REPLACED