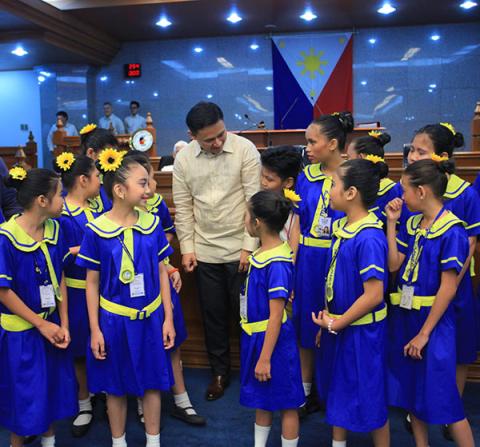 To foster a culture of preparedness among Filipinos, reelectionist Senator Sonny Angara renewed his call to make disaster risk education mandatory in the curriculum of primary schools to improve the young learners’ understanding of preparedness and response, as well as hone their readiness in dealing with natural calamities.

“Since we live in a country where earthquakes and typhoons are very common, it is imperative that every Filipino is equipped with the basic understanding and knowledge of disaster preparedness and response,” Angara said.

He added: “We can start by teaching our children how to prepare for and respond to different types of calamities. We have to produce a generation that knows how to deal with threats posed by natural disasters and climate change.”

The provision on mandatory disaster risk education in SB 1994 expands the present law, Republic Act 10121 or the Philippine Disaster Risk Reduction and Management Act of 2010, which mandates the integration of disaster risk and management education in the curriculum of secondary and tertiary levels of education, including the National Service Training Program or NSTP.

The lawmaker from Aurora, who is running under the platform “Alagang Angara,” suggested that the lesson plans to be developed should focus on “preparedness skills” children can integrate easily into their lifestyles and share with their families.

“The preparedness skills training in the classroom must be designed in such a way that children will develop a sense of responsibility to share with their family members whatever knowledge they acquired about disaster preparedness and response,” he pointed out.

“This will give our children confidence, a sense of control, and turns them into self-advocates for disaster preparedness,” he added.

Angara said disaster planning is a must for a disaster-prone country like the Philippines, which sits along the Pacific Ring of Fire and the Tropical Cyclone Belt.

Based on the 2016 World Risk Index, the Philippines ranked third in terms of vulnerability to natural hazards and climate change. Every year, the country experiences almost all forms of natural disasters such as typhoons, earthquakes, volcanic eruptions, floods and landslides.

Last Monday, a magnitude 6.1 earthquake jolted parts of Luzon, leaving at least 16 people dead and more than a hundred injured, and critical infrastructures damaged. This was followed by another powerful temblor, with a magnitude of 6.5, in the Visayas on Tuesday, and a magnitude 4.7 quake in Mindanao on Wednesday.

Following the Luzon earthquake, Angara pushed for the immediate passage of his bill creating the Department of Disaster Resilience that will oversee a comprehensive and coordinated strategy in managing natural disasters, with the main goal of saving lives and minimizing damage to property.

He also called on local government units (LGUs) to spend their local disaster funds wisely by prioritizing disaster planning and risk management, saying such move is more proactive and cost-effective in terms of disaster response.

To prevent casualties and damages during calamities, Angara said LGUs should implement precautionary measures like strict enforcement of the building code, limiting developments in disaster-prone areas, and identification of relocation and evacuation sites.

“These steps should lessen the impact of future disasters. It doesn’t prevent earthquakes and extreme weather events, but it makes us more resilient to those impacts,” Angara said.

Angara: Pilot implementation of face-to-face classes needed before resumption nationwide
Immunization of the population expected to begin with the approval of the COVID-19 vaccination program bill-- Angara
Angara seeks exemption to donor’s tax for donations of COVID-19 vaccines and critical supplies
Angara: Growing number of out of school youth is a cause of concern
Angara: Ecommerce will help ensure the survival of MSMEs and boost economic growth
Angara bill seeks to assist LGUs in shifting to digital
2021 judiciary budget will ensure implementation of the Judges-at-Large Act and the judiciary marshal service – Angara
STATEMENT OF SEN SONNY ANGARA
ANGARA: PGH AND EAST AVENUE MEDICAL CENTER RECEIVE ADDITIONAL FUNDING UNDER THE 2021 GAA TO SERVE MORE FILIPINOS IN NEED OF MEDICAL ATTENTION
PCMC receives additional support under the 2021 GAA to provide even better services for children in need of medical attention-- Angara
Statement of Sen. Sonny Angara on the signing of the 2021 GAA
Christmas message of Sen. Sonny Angara
Angara: Displaced workers will continue to receive assistance under the 2021 budget
Improved internet services even in far flung areas expected with the increase in the budget for the National Broadband Program-- Angara
Angara-- New and unfunded laws will receive funding under the 2021 GAA
Improved health responses needed to boost consumer confidence and spur economic growth -- Angara
Angara wants more public hospitals and medical professionals to ensure all Filipinos are provided with quality health care
Angara wants public libraries to provide essential services to learners under the new normal
Statement of Sen. Sonny Angara on the transmittal of the 2021 GAB by the House of Representatives
Angara bats for the naturalization of Angelo Kouame
END_OF_DOCUMENT_TOKEN_TO_BE_REPLACED