Angara: Exceptions to quarantine for seniors needed under a GCQ 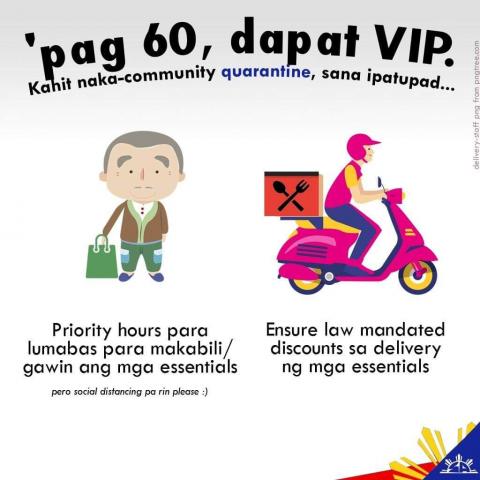 Senator Sonny Angara today asked for the grant of certain exceptions for senior citizens who have been stuck in their homes during the enhanced community quarantine (ECQ) and could remain holed up for an extended period once the lockdown is lifted and the “new normal” kicks in.

The Inter-Agency Task Force on Emerging Infectious Diseases (IATF) has released the guidelines under a general community quarantine (GCQ), which includes allowing certain businesses to resume operations but requires individuals below 21 and those 60 years and above to stay at home.

Angara said that he has received a lot of complaints from irate seniors after learning about the GCQ guidelines, particularly those who still work or are still productive members of society.

“Many seniors are also living alone or separate from their families so prohibiting them from going out of their homes to buy essential goods such as food and medicine will lead to a lot of problems on their part,” Angara said.

“We understand that older adults have a higher risk of contracting severe diseases due to COVID-19 and we should ensure they are given the proper care and protection. But we should also address their basic needs during this critical period. Let us strike a balance between these two concerns,” he added.

Angara, whose father, the late former Senate President Edgardo Angara was the author of Republic Act 7432 or the Senior Citizen’s Act of 1992, emphasized the obligation of the state to care for its elderly.

The landmark law granted benefits and privileges to senior citizens, which were expanded further with the passage RA 9994 in 2010, of which the younger Angara was among the authors.

Even under the ECQ or GCQ, Angara said the basic needs of the seniors do not change and they will still have to procure essential items one way or another.

Angara suggested a number of options that the authorities may consider for seniors such as the implementation of special hours and priority services at establishments such as groceries and drug stores.

Angara urged the IATF to fast track the issuance of the operating guidelines for this so that everyone, including our working seniors, will be able to resume their normal lives once the lockdown is lifted.

“The Philippines is not an ageing society so the risks are not as high as other countries with a greater percentage of their population aged 65 or above. Of course the risks are still there for the immunocompromised or those with a weakened immune system, which is why we should find a balance between the needs of the seniors and their vulnerability to disease,” Angara said.

Angara supports PPPs as the way to go for many local projects to ensure their implementation
Angara celebrates the enactment of three laws for the youth
Statement of Sen Angara on the Enactment into Law of the Social Pension for Seniors
Sen. Angara on the passing of former Pres. Fidel V Ramos
Angara-- Restore the heritage sites damaged by the Abra quake at the soonest possible time
Angara sees the establishment of satellite specialty hospitals as timely and doable
Reaksyon ni Sen. Sonny Angara sa SONA ni PBBM
Statement of Senator Sonny Angara
INCOMING DBM SECRETARY NI PBBM, HIGHLY-QUALIFED, MAY MAIPAGMAMALAKING TRACK-RECORD -- ANGARA
Statement of Sen. Sonny Angara on the Appointment of Amenah Pangandaman as DBM Secretary
PDIC charter amendments for a stronger and more resilient banking system—Angara
Kaugnay sa muling paglobo ng COVID cases sa bansa: “MAGPABAKUNA, SUMUNOD SA HEALTH PROTOCOLS AT PATULOY NA PAG-INGATAN ANG KALUSUGAN” - ANGARA
Statement of Committee on Finance Chairman, Sen. Sonny Angara on the signing of the 2022 GAA
Angara reminds PhilHealth of their obligations to the public
Threat of Omicron highlights need to improve biosurveillance and genome sequencing capabilities—Angara
Angara: Don’t let vaccines go to waste-- Allow booster shots for private sector workers
SEN. ANGARA ON THE THREAT OF HOSPITALS TO WITHDRAW FROM PHILHEALTH SYSTEM BECAUSE OF DELAYED REIMBURSMENTS OF CLAIMS:
Angara: Decline in COVID cases should not result in complacency
Angara: Go the extra mile to vaccinate our senior citizens
Angara to DOLE: Targeted interventions needed to ensure no one is left behind
END_OF_DOCUMENT_TOKEN_TO_BE_REPLACED