Angara to the LGUs affected by Typhoon Ambo: COVID-19 protocols should still be observed 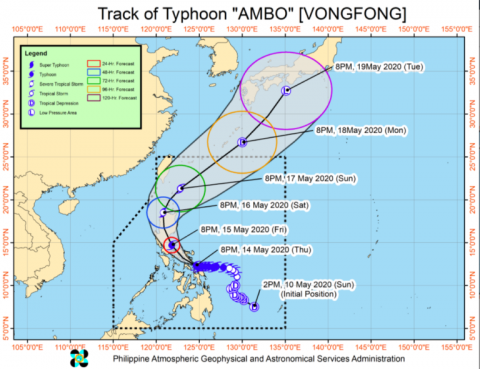 Senator Sonny Angara called on all the local government units in the projected path of Typhoon Ambo to activate its standard operating procedures during severe weather disturbances, but putting special emphasis on COVID-19 protocols this time around.

Angara said he is aware of the amount of preparations the LGUs have to undertake whenever they are in the path of a storm but said that the threat of community transmission of COVID-19 must be integrated into their contingency plans “because we don’t want this disease to compound to the problems already being faced by the affected provinces at this time.”

In preparing the evacuation centers, Angara said that social distancing should still be observed and everyone should be wearing face masks and practicing good personal hygiene.

The challenge to these provinces now will be even greater now that some of its evacuation sites are already being used as quarantine centers for COVID-19.

Angara said the LGUs should look for other facilities that could be used as alternative evacuation sites if possible.

The Philippine Institute of Volcanology and Seismology has also issued an advisory on Mayon Volcano in Albay, warning the residents of the area that heavy rainfall due to Ambo could result in lahar flows.

Heavy rainfall is expected over Eastern Visayas and Bicol provinces based on the forecast of the Philippine Atmospheric, Geophysical and Astronomical Services Administration (PAGASA).

“This is going to be difficult for sure. But what we are after here is saving lives. We don’t want a situation where we have zero casualties from the storm but end up losing the people we love later on due to this deadly virus,” Angara said.

“The entire nation is praying that Ambo will spare us from severe damages and casualties. We are faced with an extraordinary situation right now with COVID-19, but if we all work together and cooperate, I am certain that we will survive this. We will once again show the world how resilient we are as a people. Mag ingat po tayong lahat,” he added.

Angara: Benefits for health workers to continue even after Bayanihan 2 expiration on June 30
EASTER SUNDAY MESSAGE OF SEN. SONNY ANGARA
Statement of Sen. Angara on the procurement of vaccines by the private sector
SK reform bill hurdles committee level-- Angara
Angara: Kouame an asset to Philippine basketball
Angara pushes for 100% increase in PDIC deposit insurance coverage
Angara: Pilot implementation of face-to-face classes needed before resumption nationwide
Immunization of the population expected to begin with the approval of the COVID-19 vaccination program bill-- Angara
Angara seeks exemption to donor’s tax for donations of COVID-19 vaccines and critical supplies
Angara: Growing number of out of school youth is a cause of concern
Angara: Ecommerce will help ensure the survival of MSMEs and boost economic growth
Angara bill seeks to assist LGUs in shifting to digital
2021 judiciary budget will ensure implementation of the Judges-at-Large Act and the judiciary marshal service – Angara
STATEMENT OF SEN SONNY ANGARA
ANGARA: PGH AND EAST AVENUE MEDICAL CENTER RECEIVE ADDITIONAL FUNDING UNDER THE 2021 GAA TO SERVE MORE FILIPINOS IN NEED OF MEDICAL ATTENTION
PCMC receives additional support under the 2021 GAA to provide even better services for children in need of medical attention-- Angara
Statement of Sen. Sonny Angara on the signing of the 2021 GAA
Christmas message of Sen. Sonny Angara
Angara: Displaced workers will continue to receive assistance under the 2021 budget
Improved internet services even in far flung areas expected with the increase in the budget for the National Broadband Program-- Angara
END_OF_DOCUMENT_TOKEN_TO_BE_REPLACED