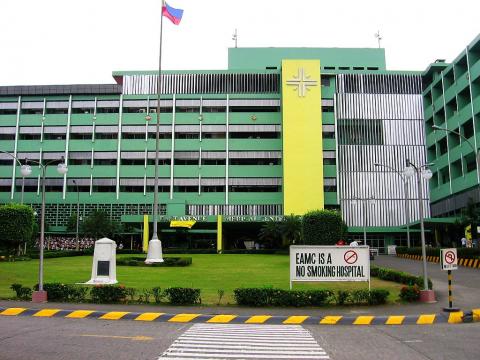 Senator Sonny Angara has filed a bill to increase the bed capacity of the East Avenue Medical Center in Quezon City from the current 600 to 1,000.

A tertiary hospital under the jurisdiction of the Department of Health, the EAMC is constantly operating at overcapacity so in order to accommodate more patients in need of medical attention, Angara said there is an urgent need to increase its bed capacity.

The last time the EAMC was able to increase its bed capacity was in 1997 when Congress passed Republic Act 8345, which added 250 beds to its then 350-bed capacity.

Established in 1969, the EAMC has been providing quality service to marginalized Filipinos from Metro Manila and surrounding provinces.

The EAMC is designated by the DOH as a training and teaching center for its medical and non-medical staff in order to provide them with opportunities for professional development and competency-building.

According to the DOH, this has resulted in the EAMC having well-trained and competent professionals who have helped the hospital in continuously providing quality health care services to its patients.

Following the enactment of RA 8345, the manpower compliment of the EAMC was raised to 1081 employees consisting of 269 Medical, 534 Nursing and 278 Paramedical and Administrative.

“As the EAMC continuously provides quality health service for over 50 years to marginalized patients, it is only proper that the hospital be given support through a legislation that would increase their bed capacity to 1,000 to reinforce the center’s capabilities for the benefit of even more Filipinos,” Angara said in filing Senate Bill 1291.

The bill also calls for the upgrading of the existing facilities, professional health care services and health human resource of the EAMC to complement the increase in its bed capacity.

Once the bill is enacted into law, the Secretary of Health will include the funding required for the increase in EAMC’s bed capacity, as well as the upgrading of the service facilities and professional health care services.

The additional bed capacity must be implemented within a year after the law’s enactment.

At present, a DOH-run hospital can only increase its bed capacity and upgrade its service capability through legislation.

Angara said this policy must be changed because waiting for laws to be passed in order to increase bed capacities of hospitals is detrimental to the best interests of the Filipino people.

In July last year, Angara filed Senate Bill 698, authorizing the DOH to set and approve the bed capacity and service capability of all of its hospitals.

“It makes sense that it is the DOH and not Congress that determines the requirements of these hospitals that are under its jurisdiction anyway. By doing this, these hospitals would be able to operate more efficiently and better serve its patients,” Angara said.

Immunization of the population expected to begin with the approval of the COVID-19 vaccination program bill-- Angara
Angara seeks exemption to donor’s tax for donations of COVID-19 vaccines and critical supplies
Angara: Growing number of out of school youth is a cause of concern
Angara: Ecommerce will help ensure the survival of MSMEs and boost economic growth
Angara bill seeks to assist LGUs in shifting to digital
2021 judiciary budget will ensure implementation of the Judges-at-Large Act and the judiciary marshal service – Angara
STATEMENT OF SEN SONNY ANGARA
ANGARA: PGH AND EAST AVENUE MEDICAL CENTER RECEIVE ADDITIONAL FUNDING UNDER THE 2021 GAA TO SERVE MORE FILIPINOS IN NEED OF MEDICAL ATTENTION
PCMC receives additional support under the 2021 GAA to provide even better services for children in need of medical attention-- Angara
Statement of Sen. Sonny Angara on the signing of the 2021 GAA
Christmas message of Sen. Sonny Angara
Angara: Displaced workers will continue to receive assistance under the 2021 budget
Improved internet services even in far flung areas expected with the increase in the budget for the National Broadband Program-- Angara
Angara-- New and unfunded laws will receive funding under the 2021 GAA
Improved health responses needed to boost consumer confidence and spur economic growth -- Angara
Angara wants more public hospitals and medical professionals to ensure all Filipinos are provided with quality health care
Angara wants public libraries to provide essential services to learners under the new normal
Statement of Sen. Sonny Angara on the transmittal of the 2021 GAB by the House of Representatives
Angara bats for the naturalization of Angelo Kouame
Angara pushes for survivorship benefits for members of the National Prosecution Service
END_OF_DOCUMENT_TOKEN_TO_BE_REPLACED