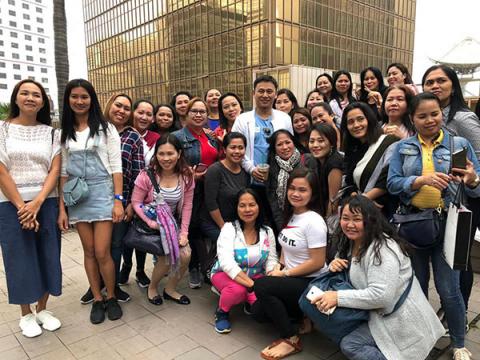 Reelectionist Senator Sonny Angara received a warm welcome from overseas Filipino workers (OFWs) in Hong Kong where he brought his “Alagang Angara” campaign last Sunday, barely two weeks before the start of the overseas absentee voting for the May 13 midterm elections.

During his first campaign sortie abroad, Angara proudly said that through the various legislation he helped pushed into law, OFWs are “now provided with tangible and concrete government support, not lip-service.”

Angara was referring to Republic Act 10801 or the OWWA Act of 2016, which he co-authored and sponsored in his capacity as then chair of the Senate Committee on Labor, Employment and Human Resources Development.

The law provides a wide range of services and benefits to OFWs funded by the $25 membership fee collected from them every two years.

Other pro-OFW legislation that Angara co-authored are RA 10928 which extended the validity of passports from 5 years to 10 years, RA 10863 which raised to P150,000 from P10,000 the tax-exempt value of “balikbayan” boxes sent by Filipinos overseas, and RA 10706 or the Seafarers Protection Act that guards seafarers against ambulance chasing and excessive fees.

The lawmaker from Aurora said OFWs need not have to worry about the school tuition and health care of their family members in the Philippines because education—from kindergarten to college—is already free in public educational institutions and health care has been made affordable under the Universal Health Care Law, which he co-authored.

Angara is one of the authors of the Free College Education Act, which has made tuition and miscellaneous fees free in 112 state universities and colleges, 78 local universities and colleges, and all duly registered technical-vocation education and training programs. He also authored the Free Kindergarten Law when he was a member of the House of Representatives representing the lone district of Aurora province.

Angara’s Hong Kong visit came two weeks before overseas Filipino voters start casting their votes for the May 13 elections. The absentee voting for Filipinos starts on April 13 and ends on May 13.

Hong Kong is the fourth most preferred country of destination among OFWs with at least 160,000 as of 2017. The former British colony consistently tops overseas absentee voting turnout.