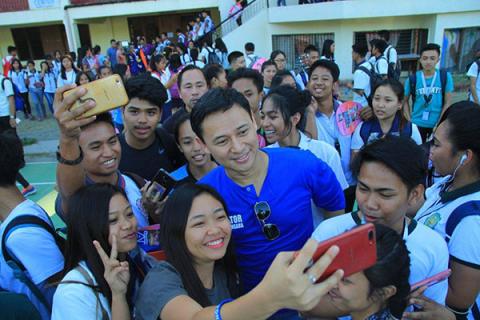 Now that the bill granting the 20-percent student fare discount is on President Duterte’s desk for his signature, reelectionist Senator Sonny Angara believes it will become a law in time for the return of students from the provinces for the school opening in June.

But this early, Angara, one of the Senate authors of the measure, is calling on the Department of Transportation (DOTr) to draft the law’s implementing rules and regulations (IRR) so it can be implemented immediately once the measure is signed by the President.

“If a bill’s enactment is anticipated, then the implementing agency, in a proactive move, can ready the IRR especially if there is a schedule to be met, which in this case is the opening of classes seven weeks from now,“ Angara said.

“This is one of those ‘do not delay’ laws. So its implementation should not be held up by the absence of an IRR. Kung merong anticipated bidding at early procurement sa public works, dapat merong advance writing of IRR para sa mahahalagang batas,“said the senator from Aurora, who is running under the platform “Alagang Angara.”

Angara said ideally both the law and the IRR should be in effect first week of May so that students can buy discounted bus, ship and plane tickets ahead of the school opening.

“Many book one month in advance so it will be good if the law is in effect by then,” he said.

Angara’s bill expands the current limited land fare discounts for students that they can only avail of during school days to an “all-year, all forms of transport” privilege.

Angara’s Senate Bill 1597 seeks to institutionalize the fare discount currently being implemented by the Land Transportation Franchising and Regulatory Board (LTFRB) even during weekends and holidays and cover all means of transportation year-round.

The LTFRB, in October 2017, issued a memorandum circular stating that “students can avail of the 20-percent discount from Monday to Sunday, including summer breaks, legal and special holidays.”

Failure to provide the fare discount is a franchise violation that carries a penalty of a fine of P5,000 for the first offense, P10,000 and their vehicles impounded for one month for the second offense, and P15,000 and cancellation of franchise for the third offense, the agency said.

Angara, however, said there is always a possibility that the student fare discount may not be enforced effectively since it is just based on a mere circular issued by the LTFRB.

COVID positive Angara continues to help despite isolation
Statement of Senator Sonny Angara
Angara says volunteer health workers should receive hazard pay, other benefits too
Angara: Find ways to provide aid to the people affected by the COVID-19 quarantine
Angara to LGUs and DSWD: Take care of the needs of quarantined families
Consider the welfare of workers in addressing COVID-19-- Angara
Angara on the first local transmission of COVID-19: Be vigilant but don’t panic
Angara urges schools to adopt the sablay as a replacement of togas for graduation ceremonies
Angara calls on DOLE to conduct a survey of sectors where jobs are being lost due to COVID-19
Angara: It is time to transform the Philippines from a consuming economy to one that produces
Finance committee to conduct a comprehensive review of government’s programs on industrialization and jobs generation-- Angara
Angara wants a review of all laws and programs for the Filipino youth
DTI gets unprecedented increase in 2020 budget for Tatak Pinoy Initiatives-- Angara
Angara seeks an increase in the bed capacity of the East Avenue Medical Center
Senator Angara urges immediate assessment after alert level lowered for Taal Volcano
Statement of Senator Angara on the sudden demise of Kobe Bryant
2020 GAA has over P300 million for the implementation of the Innovation Act-- Angara
DICT gets P6.2 billion hike in its 2020 budget to make the government more digital and interconnected
Senator Sonny Angara on the eruption of the Taal Volcano
Angara urges DOLE to provide emergency employment and assistance to workers displaced by the Taal eruption
END_OF_DOCUMENT_TOKEN_TO_BE_REPLACED