ANGARA TELLS YOUTH: EDUCATION CAN EMPOWER YOU TO EFFECT CHANGE IN PHL 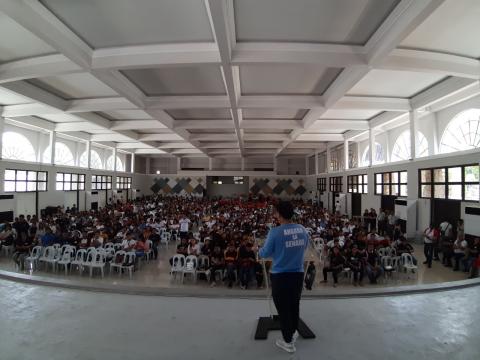 Reelectionist Senator Sonny Angara said education is a powerful tool to make the youth enablers of transformation and turn the country into an economic powerhouse where jobs abound and social services are accessible to all.

Data from the United Nations Development Programme (UNDP) as of 2018 showed that the Philippines has the third youngest people among the 700 million youth in the Asia Pacific region, of which about 30 percent are below 15 years old. The median age in the country is 26.

“By sheer number, the youth sector is a potent force to effect change in the Philippines,” said Angara, who was first elected into office in 2004 as representative of the lone district of Aurora province at the age of 32, the youngest lawmaker during the 13th Congress.

“And with education, the Filipino youth can deliver this country to progress and bring an end to the cycle of poverty,” said the lawmaker, who is running under the platform “Alagang Angara.”

Angara has been pushing students to take their studies seriously and work toward becoming productive citizens.

“As students, your responsibility is to study hard because that’s your passport to employment and good life,” Angara said. “Education is a great socioeconomic equalizer and a stepping stone to something higher and brighter.”

Free education—from kindergarten to college—is one of Angara’s advocacies, as he co-authored the Free College Education Law and the Free Kindergarten Law. His father, the late Senate President Edgardo Angara, was the author of the Free High School Act that ensured secondary education even for the poorest.

Proof that the Angaras put premium on education, the senator studied at the London School of Economics, where he finished his undergraduate degree in International Relations with honors. After completing his law degree at the University of the Philippines College of Law, Angara went to the Harvard Law School in the United States to earn his Master of Laws degree.

Angara, chair of the Senate Committee on Ways and Means and vice chair of the Committee on Finance, earlier disclosed that the government is spending a whopping P46 billion to implement RA 10931 this year, making it the biggest budget for free college education in Philippine history.

Aside from the free tuition to more than 800,000 students in public higher education institutions (HEIs), Angara said that allowance and other financial assistance will be provided to poor students to enable them to finish their studies.

He also revealed that each of the 300,000 poor students from both public and private HEIs can get an allowance of up to P60,000 under the Tertiary Education Subsidy (TES) program.

The TES prioritizes students whose families are beneficiaries of the government’s Pantawid Pamilyang Pilipino Program or 4Ps and those studying in private schools in 214 cities and municipalities with no existing SUC or LUC.

On top of the budget for RA 10931, Angara said the Senate also allocated P1 billion for the scholarship of poor but deserving students in private universities and colleges all over the country.

Immunization of the population expected to begin with the approval of the COVID-19 vaccination program bill-- Angara
Angara seeks exemption to donor’s tax for donations of COVID-19 vaccines and critical supplies
Angara: Growing number of out of school youth is a cause of concern
Angara: Ecommerce will help ensure the survival of MSMEs and boost economic growth
Angara bill seeks to assist LGUs in shifting to digital
2021 judiciary budget will ensure implementation of the Judges-at-Large Act and the judiciary marshal service – Angara
STATEMENT OF SEN SONNY ANGARA
ANGARA: PGH AND EAST AVENUE MEDICAL CENTER RECEIVE ADDITIONAL FUNDING UNDER THE 2021 GAA TO SERVE MORE FILIPINOS IN NEED OF MEDICAL ATTENTION
PCMC receives additional support under the 2021 GAA to provide even better services for children in need of medical attention-- Angara
Statement of Sen. Sonny Angara on the signing of the 2021 GAA
Christmas message of Sen. Sonny Angara
Angara: Displaced workers will continue to receive assistance under the 2021 budget
Improved internet services even in far flung areas expected with the increase in the budget for the National Broadband Program-- Angara
Angara-- New and unfunded laws will receive funding under the 2021 GAA
Improved health responses needed to boost consumer confidence and spur economic growth -- Angara
Angara wants more public hospitals and medical professionals to ensure all Filipinos are provided with quality health care
Angara wants public libraries to provide essential services to learners under the new normal
Statement of Sen. Sonny Angara on the transmittal of the 2021 GAB by the House of Representatives
Angara bats for the naturalization of Angelo Kouame
Angara pushes for survivorship benefits for members of the National Prosecution Service
END_OF_DOCUMENT_TOKEN_TO_BE_REPLACED