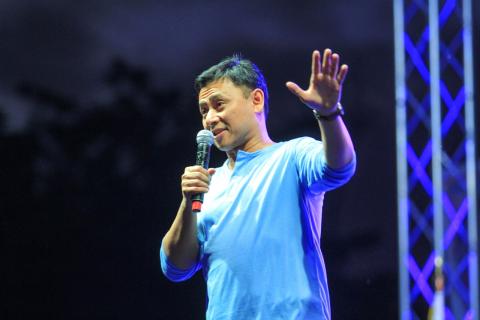 Reelectionist Senator Sonny Angara said the country needs a strong and empowered institution capable of responding to the new normal of natural disasters and climate change, as he pushed for the immediate passage of a bill creating the Department of Disaster Resilience after a magnitude 6.1 earthquake jolted parts of Luzon that killed at least eight people and injured others, and damaged critical infrastructures.

“This strong earthquake reminds us of the urgency to create a single, independent and permanent agency devoted to disaster management and resilience,” Angara said. “This new department will oversee a comprehensive and coordinated strategy in managing natural disasters with the main goal of saving lives and minimizing damage to property.”

Last year, Angara filed Senate Bill 1994 or the proposed Disaster Resilience Act which seeks to establish the Department of Disaster Resilience that will provide a “whole of government, whole of nation approach” to disasters and emergency situations.

“What we want to ensure is a seamless synergy among government agencies and stakeholders from national down to the grassroots levels to effectively respond to disasters. We need to keep every member of the family safe,” he said.

The bill, along with other similar measures, is pending with the Senate Committee on National Defense and Security. Its counterpart in the House of Representatives was passed on third and final reading in October last year.

According to Angara, it is imperative for the Philippines to have a line agency focusing on disaster resilience given that the country is considered among the countries most vulnerable to natural hazards and climate change as it is geographically located along the Pacific Ring of Fire and the Tropical Cyclone Belt.

In 2016, the Philippines ranked third in the World Risk Index of most disaster-prone countries in the world. Every year, it experiences almost all forms of natural disasters such as typhoons, earthquakes, volcanic eruptions, floods and landslides.

Under Angara’s bill, the proposed new department will be tasked to spearhead efforts to ensure disaster resilience by delivering on the highly critical and intertwined functions of disaster risk reduction, preparedness and response, as well as recovery and building forward better.

“The Department of Disaster Resilience shall be the principal government institution responsible for ensuring safe, adaptive and disaster-resilient community,” Angara said in his bill, which defines the powers and functions of the proposed agency.

He added: “It shall lead, spearhead, initiate and integrate the crafting of plans, programs, projects and activities to reduce the risk of natural hazards and effects of climate change, and manage the impact of disasters.”

Angara is also proposing to empower the head of the DDR to recommend the declaration of state of calamity, which allows the exercise of remedial measures such as price ceiling, grant of interest-free loans and tax exemptions.

The lawmaker from Aurora noted that each year, the Philippines sustains immense damage and tremendous losses due to natural disasters. These include loss of life or injury; damage to infrastructure, properties and equipment; interruption of food supply; disruptions to critical services; loss of livelihood, business or revenues from business interruption; disruption of economic development; and damage to the environment. #

Angara: Pilot implementation of face-to-face classes needed before resumption nationwide
Immunization of the population expected to begin with the approval of the COVID-19 vaccination program bill-- Angara
Angara seeks exemption to donor’s tax for donations of COVID-19 vaccines and critical supplies
Angara: Growing number of out of school youth is a cause of concern
Angara: Ecommerce will help ensure the survival of MSMEs and boost economic growth
Angara bill seeks to assist LGUs in shifting to digital
2021 judiciary budget will ensure implementation of the Judges-at-Large Act and the judiciary marshal service – Angara
STATEMENT OF SEN SONNY ANGARA
ANGARA: PGH AND EAST AVENUE MEDICAL CENTER RECEIVE ADDITIONAL FUNDING UNDER THE 2021 GAA TO SERVE MORE FILIPINOS IN NEED OF MEDICAL ATTENTION
PCMC receives additional support under the 2021 GAA to provide even better services for children in need of medical attention-- Angara
Statement of Sen. Sonny Angara on the signing of the 2021 GAA
Christmas message of Sen. Sonny Angara
Angara: Displaced workers will continue to receive assistance under the 2021 budget
Improved internet services even in far flung areas expected with the increase in the budget for the National Broadband Program-- Angara
Angara-- New and unfunded laws will receive funding under the 2021 GAA
Improved health responses needed to boost consumer confidence and spur economic growth -- Angara
Angara wants more public hospitals and medical professionals to ensure all Filipinos are provided with quality health care
Angara wants public libraries to provide essential services to learners under the new normal
Statement of Sen. Sonny Angara on the transmittal of the 2021 GAB by the House of Representatives
Angara bats for the naturalization of Angelo Kouame
END_OF_DOCUMENT_TOKEN_TO_BE_REPLACED