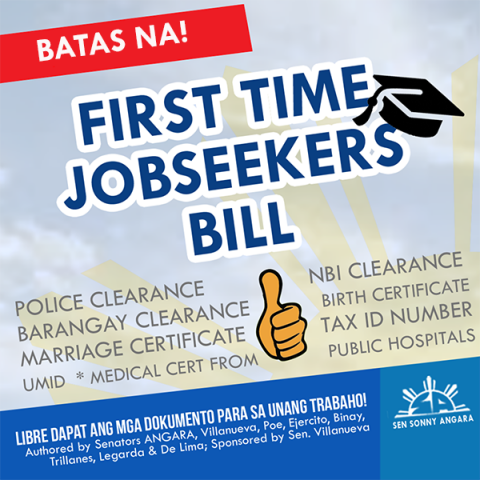 Reelectionist Senator Sonny Angara lauded President Duterte for signing into law a measure that would exempt first-time jobseekers from paying fees on government-issued documents in connection with their job application.

Angara thanked the President for signing the First-Time Jobseekers Act, which he co-authored in the Senate.

“We express our sincerest gratitude to the President for signing into law this landmark legislation that would exempt an estimated 1.3 million first-time jobseekers annually from paying fees on government-issued documents that are inordinately expensive for people without regular job,” said the lawmaker, who is running under the platform “Alagang Angara.”

“This is one classic example where the government prioritizes the welfare of its people over revenues. While the law would lead to millions of pesos in foregone government profits, it would provide financial relief to cash-strapped jobseekers,” he added.

Data showed that job applicants pay as much as P2,000 for employment requirements, a bulk of this amount is spent for government-issued documents.

“Searching for a job can be costly and this measure can help to ease a bit the financial burden first-time jobseekers are faced with,” Angara said.

“The costs of looking for work often lead to perverse outcome where jobseekers, having fallen into debt to meet these costs, find themselves worse off before and even unable to pay for basic like food.”

Angara expressed hope the law’s implementing rules and regulation would be expedited, so that recent graduates who wish to work could avail of the benefits under the measure.

Under the measure, those who can avail of the incentive are new graduates who completed the K-12 program, a bachelor’s degree or a technical-vocational course from any school, college, university or tech-voc institution in the country.

Students taking a leave of absence or those working part-time while enrolled are also qualified to avail the benefits, he said.

Angara said this measure would complement the Free College Education Law, which he co-authored.

The new law mandates Public Employment Service Office (PESO) in every province, city and municipality to assist first-time jobseekers in securing all required documents for their job application, certification or clearance, and in registering or enrolling them with relevant government agencies, such as the Bureau of Internal Revenue, Social Security System, Pag-IBIG, PhilHealth, among others.

Immunization of the population expected to begin with the approval of the COVID-19 vaccination program bill-- Angara
Angara seeks exemption to donor’s tax for donations of COVID-19 vaccines and critical supplies
Angara: Growing number of out of school youth is a cause of concern
Angara: Ecommerce will help ensure the survival of MSMEs and boost economic growth
Angara bill seeks to assist LGUs in shifting to digital
2021 judiciary budget will ensure implementation of the Judges-at-Large Act and the judiciary marshal service – Angara
STATEMENT OF SEN SONNY ANGARA
ANGARA: PGH AND EAST AVENUE MEDICAL CENTER RECEIVE ADDITIONAL FUNDING UNDER THE 2021 GAA TO SERVE MORE FILIPINOS IN NEED OF MEDICAL ATTENTION
PCMC receives additional support under the 2021 GAA to provide even better services for children in need of medical attention-- Angara
Statement of Sen. Sonny Angara on the signing of the 2021 GAA
Christmas message of Sen. Sonny Angara
Angara: Displaced workers will continue to receive assistance under the 2021 budget
Improved internet services even in far flung areas expected with the increase in the budget for the National Broadband Program-- Angara
Angara-- New and unfunded laws will receive funding under the 2021 GAA
Improved health responses needed to boost consumer confidence and spur economic growth -- Angara
Angara wants more public hospitals and medical professionals to ensure all Filipinos are provided with quality health care
Angara wants public libraries to provide essential services to learners under the new normal
Statement of Sen. Sonny Angara on the transmittal of the 2021 GAB by the House of Representatives
Angara bats for the naturalization of Angelo Kouame
Angara pushes for survivorship benefits for members of the National Prosecution Service
END_OF_DOCUMENT_TOKEN_TO_BE_REPLACED