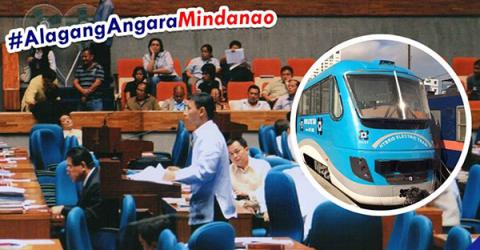 With the construction of the first railway in Mindanao finally happening this year, reelectionist Senator Sonny Angara reiterated his proposal to create the state-owned Mindanao Railways Corp. that would oversee the efficient operation and maintenance of the future train system in the country’s second largest island.

Angara said the proposed “MindaRail” would serve as an instrumentality of the government in providing a railway system that would potentially bring peace, economic development and poverty reduction in Mindanao.

“After years of conflict and neglect, Mindanao and its people will get to experience long-overdue progress once the railway system is completed,” said the lawmaker, who is running under the platform “Alagang Angara.”

Angara made the statement as he welcomed the assurance from the Department of Transportation (DoTR) that the actual construction work for the first phase of the much-awaited Mindanao Railway Project will start on the fourth quarter of 2019.

The 102-kilometer railway would link the cities of Tagum, Davao and Digos after its construction over the next three years. The DoTR aims to begin operations of the railway by 2022.

In 2016, Angara filed Senate Bill 137 seeking to establish MindaRail, which would have a capital stock of P1 billion and create an 11-member board, all to be appointed by President Rodrigo Duterte. MindaRail will have its head office in Davao City.

Once completed, Angara said the Mindanao train system would allow the island’s urban centers and growth corridors to be linked by rail.

“Rail is the locomotive that will drive Mindanao’s progress. It is also a driver for peace because as communities become interconnected, economies are linked, growth spreads, and travel brings cultural exchanges," he said.

The legislator said the train service should be capable of ferrying not just people but cargo as the island is an agriculture powerhouse producing, by last count, half-a-trillion pesos of farm produce a year.

In 2017, Mindanao had the second biggest contribution to the country’s total agricultural production at 32.58 percent. By subsector, the shares were 38.85 percent for crops, 23.8 percent for livestock, 19.61 percent for poultry, and 31.38 percent for fisheries.

“A train system is the ticket out of poverty for many of them,” Angara said, explaining that cheap, reliable and fast movement of goods would increase incomes and add value to produce.

He also noted that the island sits on a $310-billion worth of mineral deposits. “It also has vast potentials for clean energy such solar, wind, geothermal, and biomass."

Angara has been filing a bill on MindaRail since his days in Congress as representative of the lone district of Aurora province.

Angara: Pilot implementation of face-to-face classes needed before resumption nationwide
Immunization of the population expected to begin with the approval of the COVID-19 vaccination program bill-- Angara
Angara seeks exemption to donor’s tax for donations of COVID-19 vaccines and critical supplies
Angara: Growing number of out of school youth is a cause of concern
Angara: Ecommerce will help ensure the survival of MSMEs and boost economic growth
Angara bill seeks to assist LGUs in shifting to digital
2021 judiciary budget will ensure implementation of the Judges-at-Large Act and the judiciary marshal service – Angara
STATEMENT OF SEN SONNY ANGARA
ANGARA: PGH AND EAST AVENUE MEDICAL CENTER RECEIVE ADDITIONAL FUNDING UNDER THE 2021 GAA TO SERVE MORE FILIPINOS IN NEED OF MEDICAL ATTENTION
PCMC receives additional support under the 2021 GAA to provide even better services for children in need of medical attention-- Angara
Statement of Sen. Sonny Angara on the signing of the 2021 GAA
Christmas message of Sen. Sonny Angara
Angara: Displaced workers will continue to receive assistance under the 2021 budget
Improved internet services even in far flung areas expected with the increase in the budget for the National Broadband Program-- Angara
Angara-- New and unfunded laws will receive funding under the 2021 GAA
Improved health responses needed to boost consumer confidence and spur economic growth -- Angara
Angara wants more public hospitals and medical professionals to ensure all Filipinos are provided with quality health care
Angara wants public libraries to provide essential services to learners under the new normal
Statement of Sen. Sonny Angara on the transmittal of the 2021 GAB by the House of Representatives
Angara bats for the naturalization of Angelo Kouame
END_OF_DOCUMENT_TOKEN_TO_BE_REPLACED