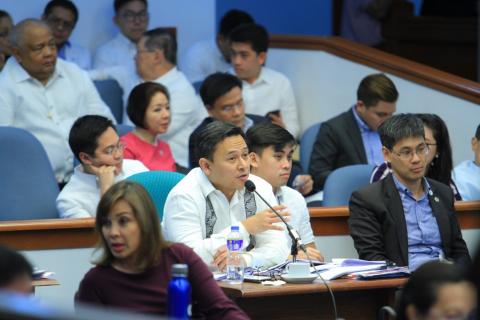 Senator Sonny Angara said the government will be in a better position to fill the massive funding gap for the universal health care (UHC) program with the passage of the bill increasing the excise tax on tobacco products.

“With the approval by both the Senate and the House of Representatives of the bill seeking higher tobacco excise taxes, we have come one step closer to giving the government more elbow room to plug the funding gap for the UHC program that aims to provide all Filipinos with affordable and quality health care,” Angara said.

The passage of the tobacco excise tax hike bill came a week after Angara sponsored the measure on the Senate floor as chair of the Committee on Ways and Means, which conducted hearings on various proposals to raise the excise tax on cigarettes.

“We look forward to seeing President Duterte sign this important bill into law,” Angara said, noting that the Chief Executive himself wanted the bill passed into law before the adjournment of the current Congress when he certified it as urgent last week.

The UHC law, which was enacted last February, automatically enrolls all Filipino citizens in the National Health Insurance Program and prescribes complimentary reforms in the country’s health care system.

Aside from giving all Filipinos health insurance, the UHC program also seeks to create more barangay health stations that would serve as primary care units and deploy more doctors and other health service staff.

The Department of Health earlier said it would need P257 billion for the first year of implementation of the law.

For 2020, the government can cover the cost of the UHC program from its current funding sources from the national budget, the Philippine Charity Sweepstakes Office and the Philippine Amusement and Gaming Corporation.

However, the Department of Finance warned the UHC program will be left with a funding shortfall of around P62 billion without the sin tax reform.

Under the Senate-approved version, the excise tax for every cigarette pack will increase from P35 to P60 for the next four years.

Also, an excise tax of P10 per pack of 20 units will be imposed on heated tobacco products, while vapor products will have a P10 excise tax for every 10 milliliters starting Jan. 1, 2020. These rates will increase by 5 percent annually beginning Jan. 2021.

Aside from raising crucial funding for the UHC program, Angara said the measure seeks to reduce smoking prevalence among Filipinos, especially the youth.

He said a much higher tobacco excise tax would help reduce deaths and disabilities due to smoking.

According to anti-smoking and health advocates, smoking prevalence in the Philippines remains relatively high at 23 percent compared to other countries with successful tobacco control initiatives.

They warned that with the current excise tax rate, an increase of 1.4 million smokers is projected in 2022. #

Angara: Pilot implementation of face-to-face classes needed before resumption nationwide
Immunization of the population expected to begin with the approval of the COVID-19 vaccination program bill-- Angara
Angara seeks exemption to donor’s tax for donations of COVID-19 vaccines and critical supplies
Angara: Growing number of out of school youth is a cause of concern
Angara: Ecommerce will help ensure the survival of MSMEs and boost economic growth
Angara bill seeks to assist LGUs in shifting to digital
2021 judiciary budget will ensure implementation of the Judges-at-Large Act and the judiciary marshal service – Angara
STATEMENT OF SEN SONNY ANGARA
ANGARA: PGH AND EAST AVENUE MEDICAL CENTER RECEIVE ADDITIONAL FUNDING UNDER THE 2021 GAA TO SERVE MORE FILIPINOS IN NEED OF MEDICAL ATTENTION
PCMC receives additional support under the 2021 GAA to provide even better services for children in need of medical attention-- Angara
Statement of Sen. Sonny Angara on the signing of the 2021 GAA
Christmas message of Sen. Sonny Angara
Angara: Displaced workers will continue to receive assistance under the 2021 budget
Improved internet services even in far flung areas expected with the increase in the budget for the National Broadband Program-- Angara
Angara-- New and unfunded laws will receive funding under the 2021 GAA
Improved health responses needed to boost consumer confidence and spur economic growth -- Angara
Angara wants more public hospitals and medical professionals to ensure all Filipinos are provided with quality health care
Angara wants public libraries to provide essential services to learners under the new normal
Statement of Sen. Sonny Angara on the transmittal of the 2021 GAB by the House of Representatives
Angara bats for the naturalization of Angelo Kouame
END_OF_DOCUMENT_TOKEN_TO_BE_REPLACED