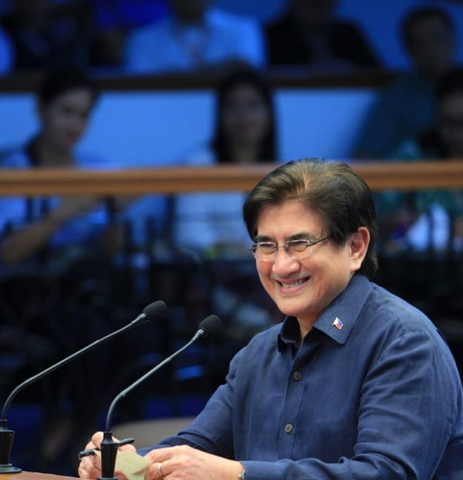 “These institutions of higher learning are supposed to be priority areas in the roll-out plan but it appears that they have become last-mile targets,” he added.

Angara, however, expressed confidence “that with Secretary Honasan at the helm of DICT, this program will be carried out with a greater sense of urgency.”

“At hindi lang siguro yung setting up ng free Wi-Fi ang pabilisin pero yung internet speed na rin,” the senator said, noting that faster internet remains to be attained in a country, which ironically has one of the highest social media subscription rates in the world.

Schools have been identified as priority sites for the implementation of the Nationwide Free Public Internet Access Program authorized under Republic Act 10929, of which Angara is a co-author.

Funding for the implementation of the program should not be a problem because annually, Congress has not been remiss in providing appropriations to implement the law.

The free public Wi-Fi project has a total budget of P1.7 billion for 2018, of which P326 million is for the installation of hotspots in SUCs, while the balance of P1.36 billion is for other public areas such as town halls, airports and other transportation terminals.

However, halfway into the year, DICT officials, upon questioning by senators, admitted that they had utilized a mere 10 percent of the P1.7 billion appropriated for 2018.

“Hindi ko alam kung ano na ang latest progress. But the election ban on certain types of government spending, the delay in the enactment of the national budget, plus the existing institutional weaknesses in project procurement have surely affected the implementation,” Angara said.

According to Angara, free internet connectivity in SUCs can help students with their research, school assignments and projects.

With free Wi-Fi access, Angara said, devices such as laptops, tablets and smartphones can connect students to a wealth of text, audio and video content not found in textbooks.

Angara: Pilot implementation of face-to-face classes needed before resumption nationwide
Immunization of the population expected to begin with the approval of the COVID-19 vaccination program bill-- Angara
Angara seeks exemption to donor’s tax for donations of COVID-19 vaccines and critical supplies
Angara: Growing number of out of school youth is a cause of concern
Angara: Ecommerce will help ensure the survival of MSMEs and boost economic growth
Angara bill seeks to assist LGUs in shifting to digital
2021 judiciary budget will ensure implementation of the Judges-at-Large Act and the judiciary marshal service – Angara
STATEMENT OF SEN SONNY ANGARA
ANGARA: PGH AND EAST AVENUE MEDICAL CENTER RECEIVE ADDITIONAL FUNDING UNDER THE 2021 GAA TO SERVE MORE FILIPINOS IN NEED OF MEDICAL ATTENTION
PCMC receives additional support under the 2021 GAA to provide even better services for children in need of medical attention-- Angara
Statement of Sen. Sonny Angara on the signing of the 2021 GAA
Christmas message of Sen. Sonny Angara
Angara: Displaced workers will continue to receive assistance under the 2021 budget
Improved internet services even in far flung areas expected with the increase in the budget for the National Broadband Program-- Angara
Angara-- New and unfunded laws will receive funding under the 2021 GAA
Improved health responses needed to boost consumer confidence and spur economic growth -- Angara
Angara wants more public hospitals and medical professionals to ensure all Filipinos are provided with quality health care
Angara wants public libraries to provide essential services to learners under the new normal
Statement of Sen. Sonny Angara on the transmittal of the 2021 GAB by the House of Representatives
Angara bats for the naturalization of Angelo Kouame
END_OF_DOCUMENT_TOKEN_TO_BE_REPLACED