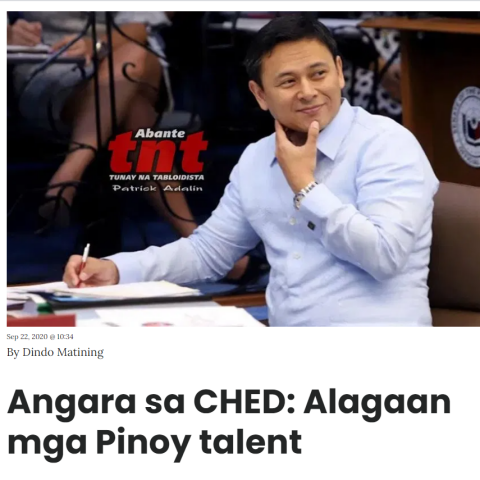 Angara, who has always been very supportive of the education sector, lauded the CHEd and the SUCs for going past the historic issue of access during the budget deliberations and moving forward to discussions about quality and innovation.

“In this direction of futures thinking, we could add as a metric of performance of the SUCs—how we are helping the Filipino producers and manufacturers by producing jobs that are local rather than just producing good graduates who eventually work overseas because we don’t have industries present in our country,” Angara said.

Among the many professionals who end up seeking better opportunities abroad are those in the medical profession, scientists, and engineers.

Angara said these educational institutions can work with the manufacturing sector and the 21st century industries for the creation of more jobs in the country so that Filipinos no longer have to leave their families behind just to find decent employment.

“We should encourage all the innovative thinkers in our country to do their part in this effort and in a way, we can move Filipinos up the value chain somehow,” Angara said.

In many developed countries, the universities run startup incubators where aspiring entrepreneurs and innovators, usually in the technology sector, are provided with support for their endeavors, usually with the participation of both the public and private sector.

In his first year as chairman of the finance committee in 2019, Angara, together with his fellow education advocates in the Senate, increased the budget of the CHEd, SUCs, including the University of the Philippines and the Philippine General Hospital by over P10 billion for fiscal year 2020.

Under the Bayanihan to Recover as One or the Bayanihan 2, a total of P3 billion was provided for the development of smart campuses in the SUCs and P1 billion for the scholarships of the Technical Education and Skills Development Authority.

Angara noted that the Senate also included a provision in the 2020 General Appropriations Act to exempt the implementation of the Universal Access to Quality Tertiary Education or what is more commonly known as the Free College Law from the cash-based budgeting in order to extend the utilization of the budgets of the SUCs and local universities and colleges, however this was vetoed by the President.

He urged the CHEd and the SUCs to work with Congress in lobbying for support from the Department of Budget and Management to the same provision in the 2021 national budget.

STATEMENT OF SEN SONNY ANGARA
ANGARA: PGH AND EAST AVENUE MEDICAL CENTER RECEIVE ADDITIONAL FUNDING UNDER THE 2021 GAA TO SERVE MORE FILIPINOS IN NEED OF MEDICAL ATTENTION
PCMC receives additional support under the 2021 GAA to provide even better services for children in need of medical attention-- Angara
Statement of Sen. Sonny Angara on the signing of the 2021 GAA
Christmas message of Sen. Sonny Angara
Angara: Displaced workers will continue to receive assistance under the 2021 budget
Improved internet services even in far flung areas expected with the increase in the budget for the National Broadband Program-- Angara
Angara-- New and unfunded laws will receive funding under the 2021 GAA
Improved health responses needed to boost consumer confidence and spur economic growth -- Angara
Angara wants more public hospitals and medical professionals to ensure all Filipinos are provided with quality health care
Angara wants public libraries to provide essential services to learners under the new normal
Statement of Sen. Sonny Angara on the transmittal of the 2021 GAB by the House of Representatives
Angara bats for the naturalization of Angelo Kouame
Angara pushes for survivorship benefits for members of the National Prosecution Service
The President's report on the implementation of the Bayanihan 2
Angara calls for extension of waiver on fees for digital transactions of banks and mobile payment services
Angara to Comelec: Work on making it easier for seniors and PWDs to vote during elections
Angara: There should be no delays in the implementation of Bayanihan 2
Angara says 2022 deadline for registration of 90 million Filipinos to PhilSys ID should be achieved without delay
Angara to CHEd and SUCs: Let’s work together in keeping Filipino graduates in the Philippines
END_OF_DOCUMENT_TOKEN_TO_BE_REPLACED