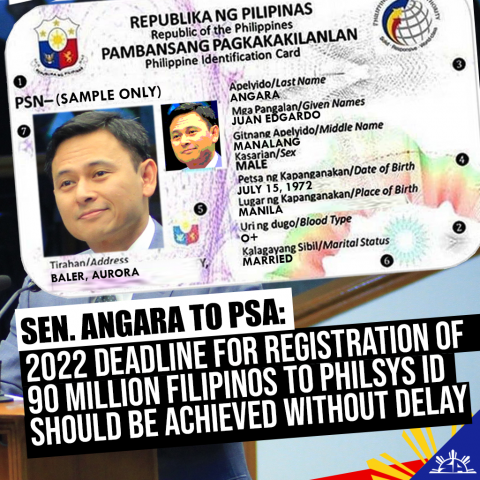 During the hearing on the proposed P11.17 billion budget of the National Economic and Development Authority (NEDA) and its attached agencies for 2021, Angara, as the chairman of the Committee on Finance, emphasized the need for the very important PhilSys ID registration to be completed at the soonest possible time.

Acting Socioeconomic Planning Secretary Karl Kendrick Chua said that for this year, a total of five million Filipinos from low-income households would be registered for the PhilSys ID and another nine million would also be pre-registered.

Based on the PhilSys roadmap presented by NEDA, 42 million will be registered in 2022 and another 24 million in 2023 to complete the process.

Chua noted that P2 billion in funding for implementation of PhilSys ID registration, in compliance with Republic Act 11055, was provided in 2019 but this was not obligated until early this year.

The registration, to be conducted by the PSA, will now start in the fourth quarter and should be in full swing by 2021. PSA is an attached agency of NEDA.

Angara said the Senate is more than willing to support this crucial program but NEDA has to set a finish line or a definite deadline for the completion of all the procedures involved.

“What is the finish line for NEDA on this? Provide us all the details because we want to separate the forest from the trees. We in Congress are willing to help you but we don’t want to see a bottomless pit,” Angara said.

Chua said NEDA has been requested to complete the registration of all 90 million Filipinos before the end of the Duterte administration and their timelines have been adjusted to reflect this deadline.

The PhilSys ID or more commonly known as the national ID, is a single national identification system for all Filipino citizens and resident aliens of the Philippines.

As a foundational ID, Chua explained that the PhilSys ID will be the single source or basis of a person’s identity and the unique number assigned to the individual will be reflected in all other functional IDs such as passports and drivers’ licences.

Once the registration starts, the basic information and biometrics of the registrant will be taken and the PhilSys ID card will be delivered in the following months.

Chua said the priority after all 90 million Filipinos are registered is to provide bank accounts to those who do not own one at all.

Angara noted that many Filipinos still do not own bank accounts and one of the main reasons for this, apart from the absence of banking offices in parts of the country, is the difficulty in providing an acceptable proof of identity as required by banks in opening accounts.

“The PhilSys ID would make it easier for Filipinos to open bank accounts, as well as for other transactions, both government and private. This is in line with our push for cashless, paperless and digital transactions, which should be supported,” Angara said.

He recalled the difficulties faced in the distribution of financial assistance to Filipinos in need under Bayanihan 1 because of the absence of a reliable database to facilitate the identification of the beneficiaries.

Angara said the PhilSys ID would have gone a long way in ensuring all the target beneficiaries received their aid and on a timely manner.

STATEMENT OF SEN SONNY ANGARA
ANGARA: PGH AND EAST AVENUE MEDICAL CENTER RECEIVE ADDITIONAL FUNDING UNDER THE 2021 GAA TO SERVE MORE FILIPINOS IN NEED OF MEDICAL ATTENTION
PCMC receives additional support under the 2021 GAA to provide even better services for children in need of medical attention-- Angara
Statement of Sen. Sonny Angara on the signing of the 2021 GAA
Christmas message of Sen. Sonny Angara
Angara: Displaced workers will continue to receive assistance under the 2021 budget
Improved internet services even in far flung areas expected with the increase in the budget for the National Broadband Program-- Angara
Angara-- New and unfunded laws will receive funding under the 2021 GAA
Improved health responses needed to boost consumer confidence and spur economic growth -- Angara
Angara wants more public hospitals and medical professionals to ensure all Filipinos are provided with quality health care
Angara wants public libraries to provide essential services to learners under the new normal
Statement of Sen. Sonny Angara on the transmittal of the 2021 GAB by the House of Representatives
Angara bats for the naturalization of Angelo Kouame
Angara pushes for survivorship benefits for members of the National Prosecution Service
The President's report on the implementation of the Bayanihan 2
Angara calls for extension of waiver on fees for digital transactions of banks and mobile payment services
Angara to Comelec: Work on making it easier for seniors and PWDs to vote during elections
Angara: There should be no delays in the implementation of Bayanihan 2
Angara says 2022 deadline for registration of 90 million Filipinos to PhilSys ID should be achieved without delay
Angara to CHEd and SUCs: Let’s work together in keeping Filipino graduates in the Philippines
END_OF_DOCUMENT_TOKEN_TO_BE_REPLACED