Angara to Comelec: Work on making it easier for seniors and PWDs to vote during elections 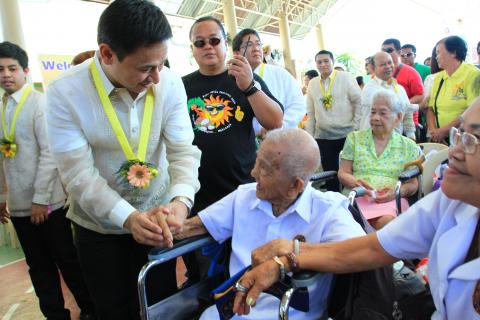 Senator Sonny Angara is pushing for the holding of early voting for close to 10 million senior citizens and persons with disabilities (PWD) to ensure greater participation in the electoral process and to reduce the risks on their health due to the COVID-19 pandemic.

Angara aired his concern about how seniors and PWDs continue to be disenfranchised or are facing difficulties in casting their votes because of issues on access and the fact they have to line up with millions of other voters at the precincts.

As an advocate for the protection of the rights and welfare of senior citizens and PWDs, Angara is set to file a bill that would pave the way for their early voting in the 2022 general elections.

Angara explained that implementing early voting for seniors and PWDs would also help in speeding up the queues at the precincts, thus allowing more voters to cast their ballots.

Apart from allowing seniors and PWDs to vote an earlier date, Angara said that the Commission on Elections (Comelec) should also look into using accessible polling places so that there will be no disincentive for them to cast their votes.

He noted how a significant number of seniors and PWDs have to climb up the stairs of public schools to cast their votes, which he said is extremely challenging for many of them.

“Comelec should study using venues such as gymnasiums and covered courts for use of our seniors and PWDs on election day. They should also work on providing people to assist them on site. Wag na natin sila pahirapan pa,” Angara said.

Apart from setting an earlier date for these particular sectors, Angara will also push for extending the voting hours to accommodate more voters.

With the rules on the new normal expected to be implemented during the elections, including physical distancing and limiting the number of people entering precincts at any given time, Angara said he will suggest to the Comelec to open the polls at an earlier hour or end at a later hour.

As chairman of the Committee on Finance, Angara said he will ask the Comelec, when their proposed 2021 budget is taken up, about the status of their preparations for the 2022 elections.

Last May, Angara filed Senate Resolution 412 seeking an inquiry on the preparations of Comelec for the 2022 elections in light of the challenges brought about by the COVID-19 pandemic.

“We want to ask Comelec sa budget hearing nila about their preparations for 2022 and if they have any contingency plans to deal with health concerns. This could be additional voting hours or days or additional precincts to better observe distancing and prevent crowding. But there may be logistical requirements for all of these which we will request details on during their budget hearing,” Angara said.

He said changes in the process of voting “may be necessary given the new normal engendered by COVID-19.”

“What is important is that the elections must push through and our electorate is safe when they go to the polls. This is why we want the Comelec to start preparing already, using the best practices of other countries as their guide,” Angara said.

Angara sees innovation as key to boosting exports
Angara set to file bill amending the Good Conduct Time Allowance Law
Statement of Samahang Basketbol ng Pilipinas Chairman, Senator Sonny Angara on the 2019 FIBA Basketball World Cup
Sen. Sonny Angara on the enactment of RA 11394 or the Mandatory Provision of Neutral Desks in Educational Institutions Act
Angara slams absurd application of the law in Mayor Sanchez’s case
Angara—Let’s work on decongesting Metro Manila now
Angara—Vision Screening Law will help prevent serious visual problems among children
Clarification that then Congressman Sonny Angara did not author the provision on good conduct allowances for convicted prisoners under RA 10592
Sen. Sonny Angara on the impending release of Antonio Sanchez
Angara—It’s about time that we focus on rehabilitating the drug users
Senator Sonny Angara on the death of Gina Lopez
Angara pushes for further reforms to the SK system
Statement of Sen. Sonny Angara on the inquiry into the anomalies in PhilHealth
Angara sees a deeper pool of national athletes with the creation of a Philippine High School for Sports
Angara lauds Marikina shoe-tech school as a good Tatak Pinoy model to improve competitiveness
Angara frustrated over inefficiencies of DepEd based on 2018 COA report
Angara— All 24 sets of eyes in the Senate to scrutinize the 2020 national budget
Angara— A reenacted budget must be avoided like a plague
Angara to government agencies: Prepare your anti-red tape stats for the 2020 budget hearings
Angara to LGUs: provide alternatives to those who will be displaced by the road clearing operations
END_OF_DOCUMENT_TOKEN_TO_BE_REPLACED